Life on the tarmac: What is happening to grounded airplanes during the Coronavirus?

Not too long ago, back when we could leave the house and go to the theatre, I was lucky enough to see the Toronto production of Come From Away, one of the most heartwarming and enjoyable theatrical productions I’ve seen in recent memory. It tells the story of how the eastern most city in North America, Gander, Newfoundland, responded on September 11th, 2001, when the airport in their small town – once the largest in the world – took in 38 grounded jets, as part of “Operation Yellow Ribbon”.

Over the last month, as airlines around the world halted operations, the scenes from 9/11 – as dramatised in that musical – stuck with me. For the first time since that disaster, and this time on a truly global scale, planes are once again grounded, flooding tarmacs as they wait to be able to fly again.

Looking at the photos on this page, or the video featured on our Instagram, you’re looking at one such example: the runway at Honolulu’s International Airport (HNL) crowded by 52 planes from Hawaiian Airlines‘ fleet of 61 jets; grounded due to flight restrictions put in place in light of the current COVID-19 pandemic.

In Come From Away, the characters in the show remind the audience that aircraft aren’t meant to be stationary; they’re built to fly. And during the song “On The Edge”, the passengers and crew are talking about the dangers of leaving aircraft on the tarmac from too long – referencing one Boeing 777 that had started sinking into the tarmac. 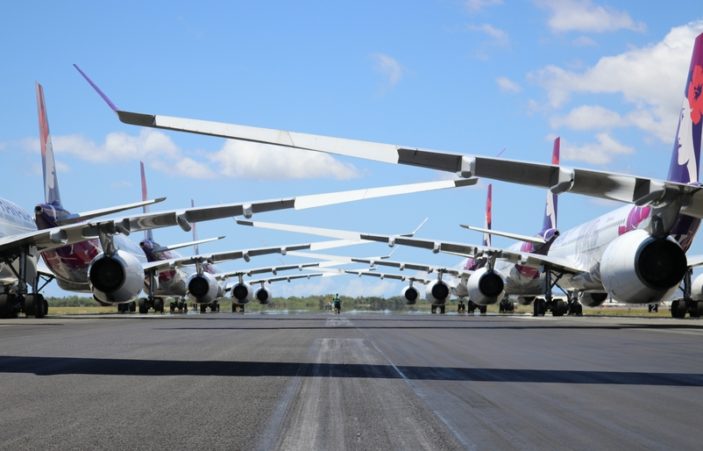 So I was curious: how long are these airplanes staying on the tarmac? How often do they have to be moved? And what care is given to them during their time of inactivity to ensure they are able and ready to fly as soon as restrictions are lifted? I reached out to Hawaiian Airlines, who provided the pictures in this article to learn more, and this is what they told me:

These locations are airport hard-stands, terminal gates, the maintenance hangar or other areas designated and approved by the state airport division allowing maintenance work to be accomplished. Each A321neo and A330 aircraft is being moved to these locations every seven days.

While this may not be the way every airline is operating, it gives you an idea of how often aircraft need to be moved, and looked after. With a line up of 52 planes, you can imagine it being a bit of a logistical nightmare every time they need to move a plane from its position. But it hopefully means no craft will be sinking into the tarmac anytime soon.

A silver lining to the fact these planes aren’t flying, too, is that this is giving the airline a chance to refit some of their aircraft. 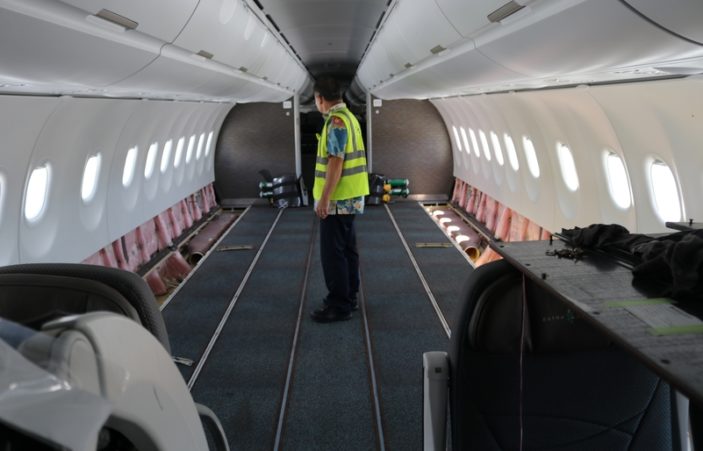 Pictured above is Jonathan Yang, director of line maintenance, inspecting a recently gutted A321neo, which is being retrofitted with “additional air-conditioning system ducts beneath the floor for improved conditioned air distribution throughout the cabin”. The modification is being done to a handful of A321neos and will optimize interior air temperature and circulation.

So how long will this routine of flight maintenance go on for? Hawaiian Airlines stopped flying to their Australia ports of Sydney and Brisbane on March 22nd and 23rd, respectively; and though had originally announced those flights would return on April 30th, it’s now extended to June 30th – but as we all know, it’s anyone’s guess at this stage when flight restrictions will ultimately be lifted. Regular flight schedules are still a long way off, but limited schedules will hopefully return sooner rather than later.

Until then, our hats are off to the airline staff around the world, keeping these aircraft in tip-top shape so that when we’re ready to fly, they are too.