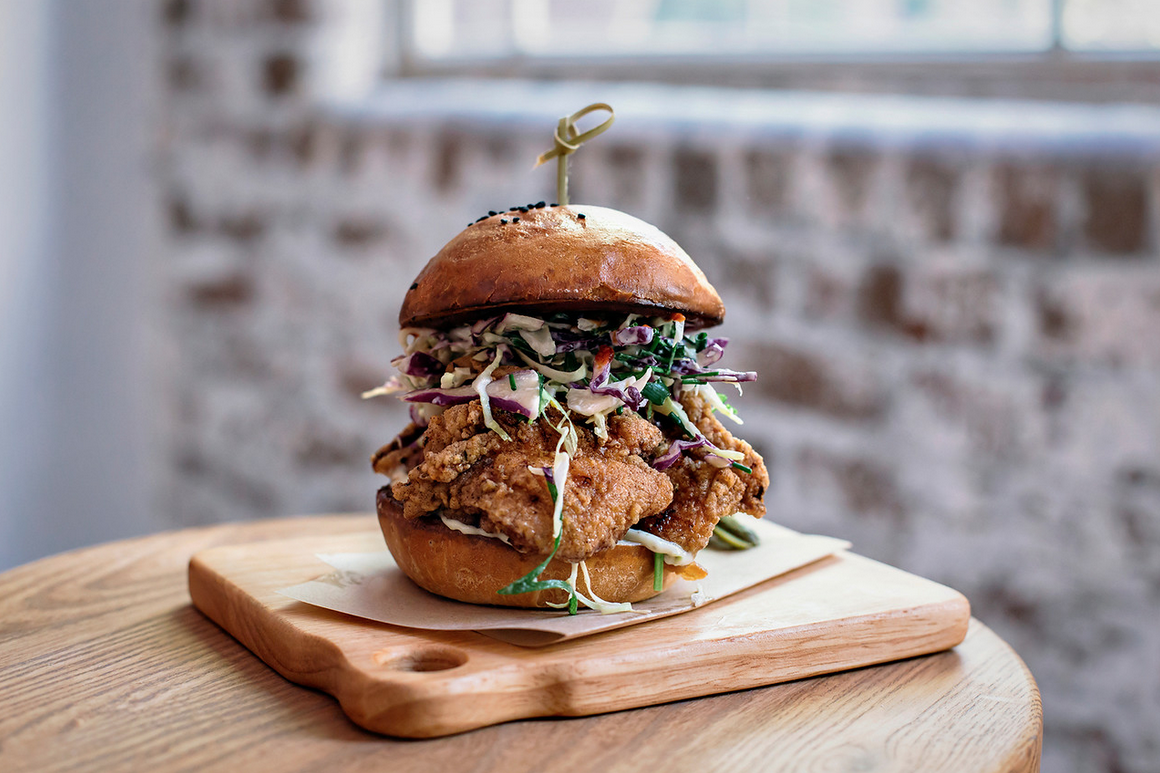 One of the The Rock’s newest and most exciting cafe openings this year has been Kansas City Shuffle, a venue that occupies the space formerly home to the Cadbury Chocolate factory, and is just a stone’s throw from Wynyard station. The very conveniently located cafe has already racked up a solid fan-base, thanks to those involved in KCS, including Benny Sweeten (ex-Joe Black, Rose Bay Diner) and Chef Kayne Mordini (of Melbourne cafe Proud Mary), and has thus far proved a necessary addition to the area’s casual dining scene.

Mordini’s work at Proud Mary down in Melbourne has been attracting acclaim since he started there in 2009, solidifying his role in upping the standards of cafe food in Victoria, and pretty much guaranteeing KCS’ popularity, of which is most definitely evident as soon as you walk into the charming vintage warehouse space.

The whole area is split into two distinct spaces, separated by the building’s entryway. The left space is a more familiar, darker cafe area with the standard seating next to the counter, at which you can spot numerous freshly baked pastries. The counter opens up to Gloucester Street via a two neat little takeaway windows, facing several chair-table set ups which allow from some street-side dining, and boasting a comprehensive coffee menu of white, black, filter, cold drip, and double ristrettos. 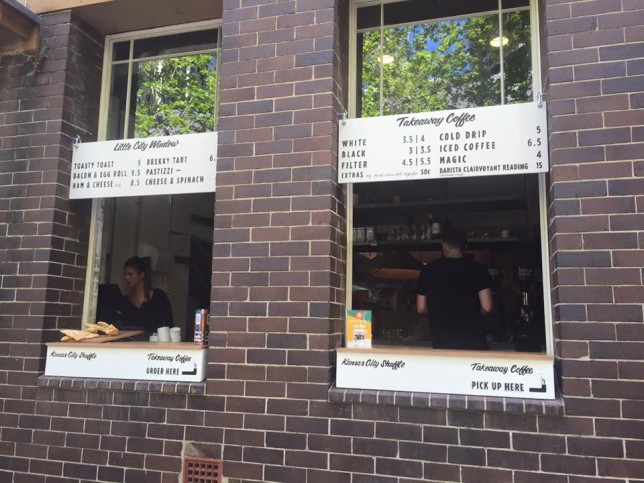 The right side of the entryway is a bit different, coated in more natural light – but still fairly dim – and coloured with stylish booths and some more spacious tables. Beyond this room, even further to the right, is a third, much larger space that is designed with functions in mind – this space is still being finished up and is expected to be completed by February 2016.

I went along just a few days after the cafe first opened and was surprised by just how busy it was. The anticipation for this opening was obviously high from the moment it was announced, but many venues still take a few weeks to find their feet and customer base; this rush was almost immediate. The hype is justified too; Mordini has put together a food menu that can appeal to both those looking for vibrant, refreshing health food and those wanting to over-indulge in waffles, brisket, fried chicken, and doughnuts. 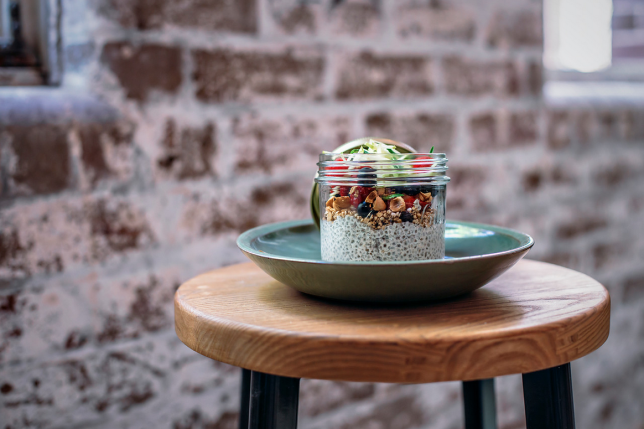 For breakfast, customers would probably want to tuck into the gorgeous Acai Smoothie Bowl ($15.5) with house granola, hazelnuts and coconut yoghurt, or the Chia Pudding ($15.5) with seasonal berries, puffed grains, and hazelnuts. However, lunch seems to be the more ideal time to give a visit to KCS, a time where you can actually justify ordering up a juicy KCS Cuban Sandwich ($17) with Berkshire pork belly, ham off the bone, cheese, pickles, and mustard, and/or the Fried Chicken Sandwich ($17) on a donut bun with slaw, pickles, and jalapeno aioli. The latter has some serious crunch to it, with a generous heap of crispy fried chicken paired up with the rich aioli and fresh slaw; the donut bun has a texture not dissimilar to a milk bun, slightly chewy and light.

It’s this balance of fresh and healthy with playful and indulgent that characterises Mordini’s approach to the food offerings at Kansas City Shuffle, of which are best downed with either a super chilled Young Henry’s beer or a smooth cold drip. 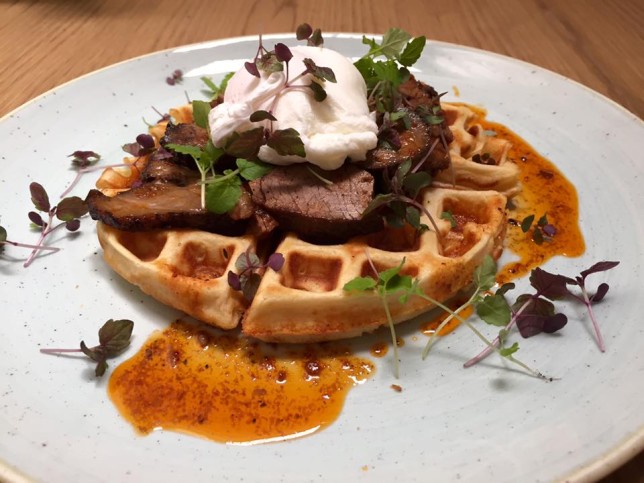 Of course, a fried chicken sandwich catches the eye of any Sydneysider on any cafe menu, and Mordini’s creation is distinctive enough, but it has nothing on the menu highlight: KCS Style Beef Brisket & Waffles ($20) glistening with smoked chilli butter and topped with a poached egg. The beef is full of flavour, with an added kick from the chilli butter – which by no means plays in the background here – and the waffles are surprisingly light and spongy, benefiting from all that yolk once you cut the egg open. This has so far seemed to be the dish that defines the cafe’s food options, and rightfully so. 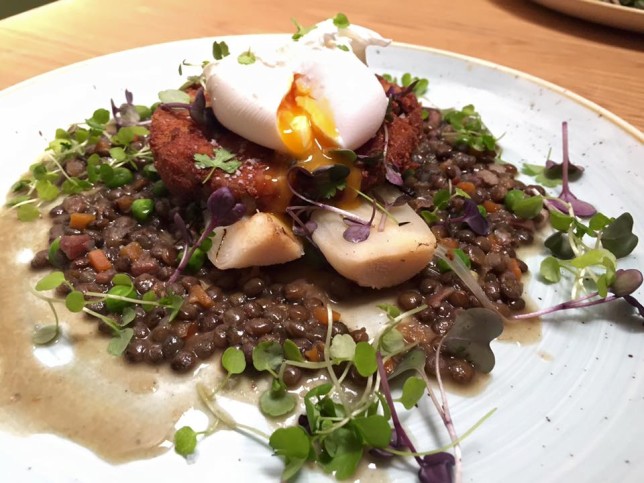 Mordini’s love for Berkshire pork is evident throughout the menu, perhaps best displayed in a nice and clean dish with braised lentils, baby leeks, brioche, and poached egg ($20). It’s a meal best had with some sides like Thick Cut Free Range Bacon ($5) and Potato + Pea Hash ($5) and a can of Young Henrys. 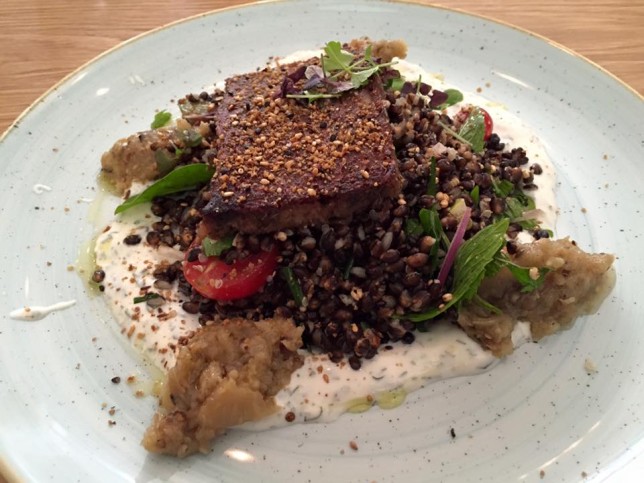 Another worthwhile dish is the Spring Lamb ($20) which comes with a slightly sweet black barley salad, smoked eggplant, yoghurt, and dukkah. It’s light, fresh, and the lamb was been pressure-cooked and pressed then seasoned with ground spices to add some great flavour. 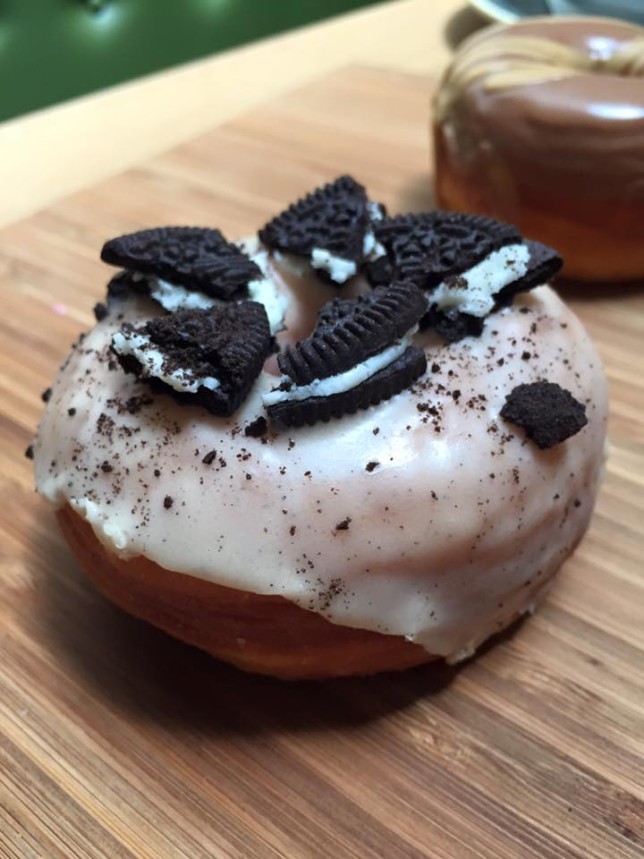 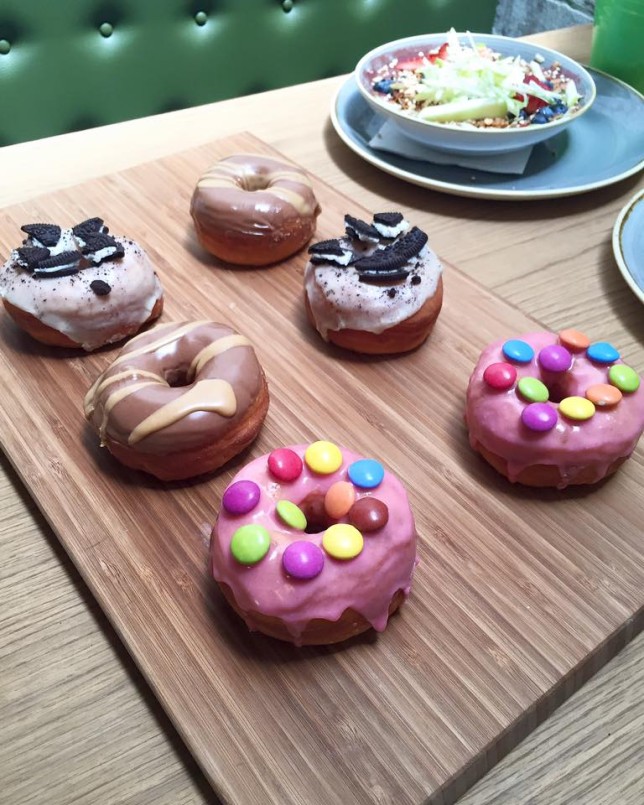 A savoury dessert option is the light and fluffy Pancake ($17.5) with fresh lemon curd, blueberries, and cream cheese, though now that the team have sourced some doughnuts from Simon Says Donuts it’s hard to resist finishing up with a round of oreo and smarties topped donuts instead, or the no-holes type with various fillings like gooey hazelnut.