When I think of New York City, I think of a bright concrete jungle with the famous Central Park at its epicentre. But in recent years, the city has been pushing its hotspots out closer to its rivers – the Hudson River on its West between Manhattan and New Jersey, and the East River, between Brooklyn and Manhattan. With the much lauded Hudson Yards now open on the previous undeveloped side of the city, here’s a look at the newest attractions that you can’t miss this Summer.

The opening of Hudson Yards

We need to start out at the part of New York City that has undergone one of the biggest transformations in the city’s history. In fact, it’s one of the biggest the country has ever seen. At 28 acres, Hudson Yards is the largest private real estate development in United States’ history (by area). Most of the land sits on a platform atop a storage yard for Long Island Rail Road trains, and it now serves as the new end point (or starting point) for the famed High Line. Already open is a mall, featuring New York’s first Neiman Marcus store (which is a surprising fact in its own right), the much instagramed “Vessel” (pictured below) and the cultural centre, “The Shed”. 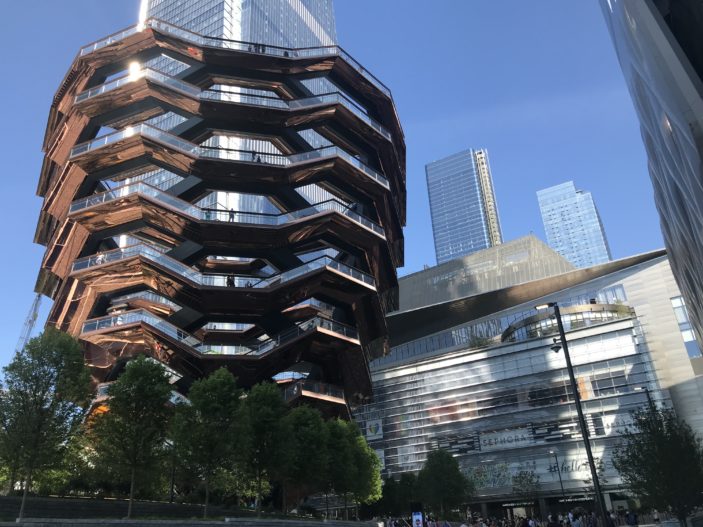 The first “phase” of Hudson Yards opened on March 15th, with buildings 30 and 35 Hudson, The Shops & Restaurants at Hudson Yards, and the public plaza – which includes the “Vessel”. Since then, there’s been a number of new openings and additions to the project, including “The Shed”, which opened in April, an extension to the High Line (known as “The Spur”) which opened in June and the much anticipated opening of the Hudson Yards’ exclusive hotel, the Equinox, alongside the largest Equinox gym in the world. The hotel opened its doors last week.

It’s taken some 20 years to get the area to this point, and indeed it remains a work in development, with construction to continue until at least 2024. But, with the exception of a few attractions like The Edge, most of the Yards’ public facing features are open now, and the updated infrastructure can already be seen bringing new life into a once untouched area of the city. Hudson Yards also serves as the newest train station in Manhattan on the 7 line, running just one stop from Times Square. It’s a station that embraces curves and mosaics, while you’re greeted to a sign around a construction site that dares you “to do it all”. 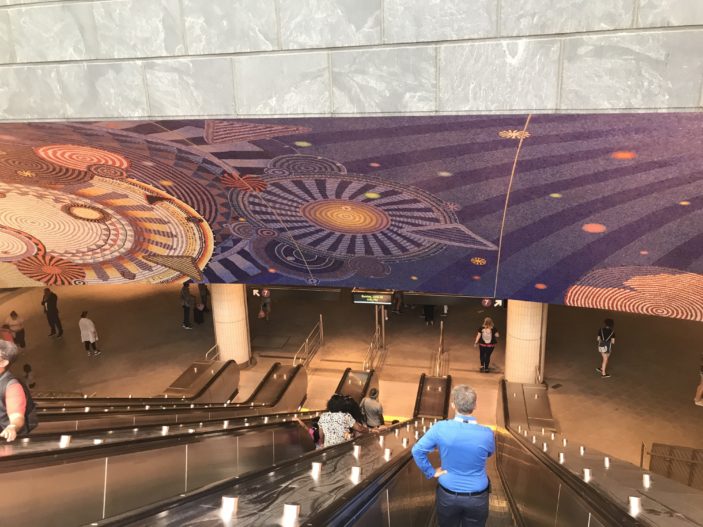 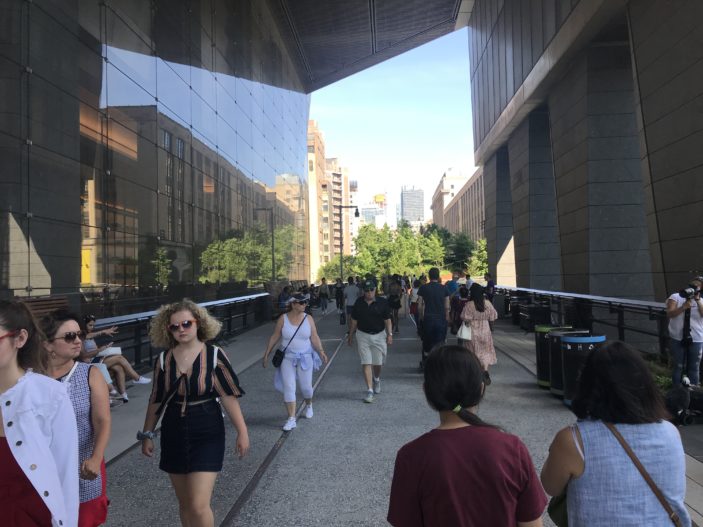 High line’s extension The Spur opened June 5th last month, as the final addition to the internationally acclaimed revitalisation project, which, like the Yards themselves, sit atop rail tracks (in this case, a deserted track). The opening brings to an end a decade of Northbound extensions to the project, timing this to that of the Hudson Yard’s opening itself. The vessel and the yards are actually sitting level to the high line; so in some ways this area sits as the end destination of the high line itself, with Simone Leigh’s sculpture, Brick House, at its centre. 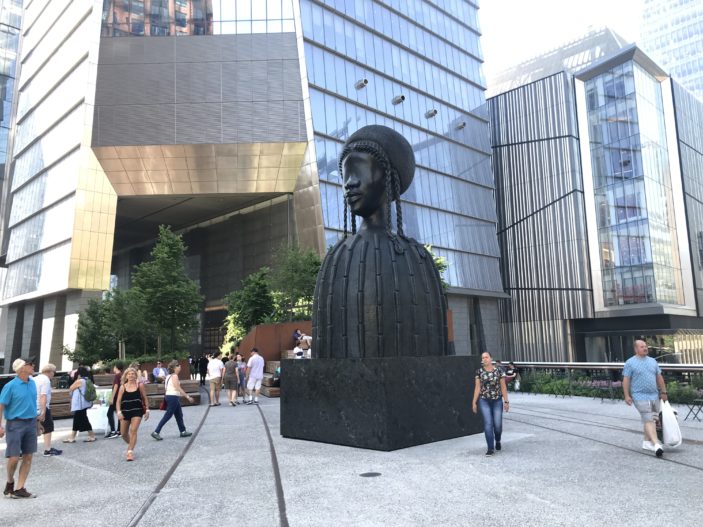 You can also walk around the new “Shed” building, which takes the High Line against the water (this first opened back in 2014, though has been closed off and on due to construction), and over the rail yards themselves. 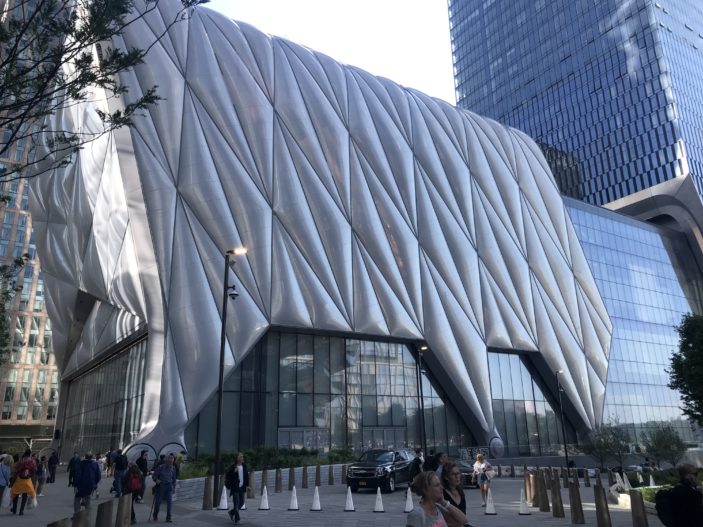 The Shed is “made to commission, produce, and present the full spectrum of performing arts, visual arts, and pop culture.” Opening back in April, there’s an “open call” exhibition which is free, but timed and ticketed. “Group 2” is on show until August 21st, featuring a number of commissioned NYC visual artists. 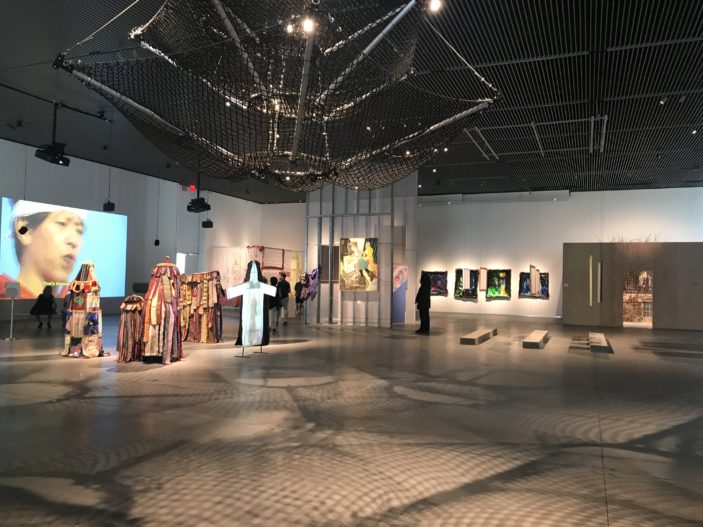 There are a number of other gallery and performance spaces, with paid tickets required, including one for a Kung Fu Musical (Dragon Spring Phoenix Rise) and one called “Collision/Coalition”, and there’s a bar (Cedric’s) that sits by the ticket counter, and elsewhere you’ll find The Griffin Theatre and The Tisch Skylights. Head HERE for more details about the space.

Inside The Shops & Restaurants at Hudson Yards (the building opposite the new entry to the high line), you’ll find a number of art installations – some even interactive, like this graffiti-friendly wall. 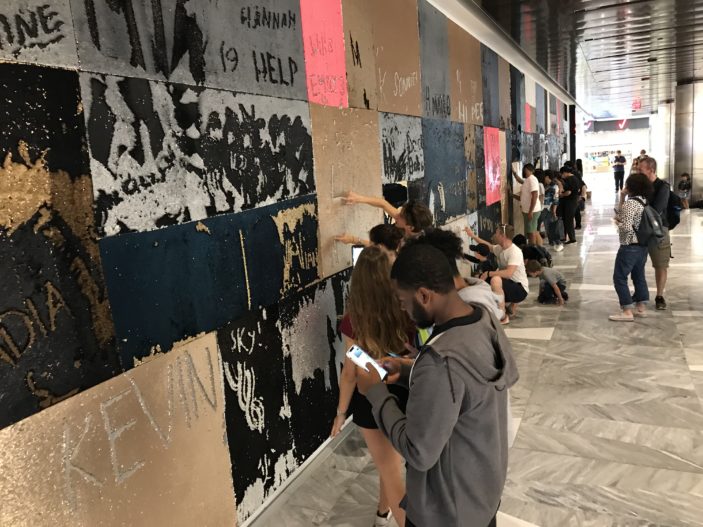 But make sure you pay a visit to one of the permanent art spaces in the complex, Snark Park, a 3000 sq ft installation space designed by Snarkitecture. You’ll also find custom merchandise and Kith Treats ice cream and a cereal bar. 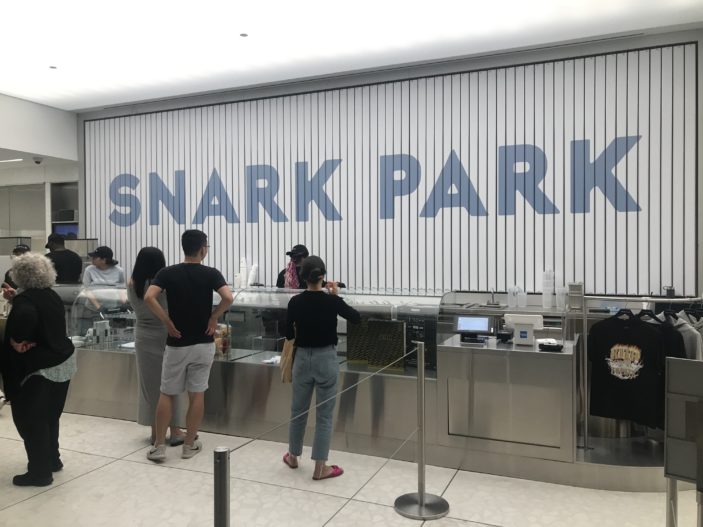 With the intersection between Art and Architecture the focus of their exploration, the installations will change three times a year. Right now, they’re just finishing up the debut exhibition, Lost and Found. It revolves around a monochromatic maze, with games and tactile objects: Broken columns, mirrors, and different materials inside said columns. There’s also a contemplation room – a relaxation zone with black lights and bean bags, and you can see people walking around the installation space through the windows.

There’s wind chimes and other relaxation music playing, which is somewhat disconnected by the noise of the patrons outside. But the whole area is meant to be one of relaxation, and you can even get a view of the Vessel from the windows. Enjoy up to 45 minutes in there, with timed tickets for Adults are US$18, and US$10 for children. More details can be found HERE.

The Edge will feature here in this building soon too. At 100 stories up it’s gonna be the highest outdoor deck in the Western Hemisphere, so look out for that. And speaking of viewing platforms…

The Vessel has a timed ticketed system for entry (though this one is free), and it reminds me of the artificial “supertrees” in Singapore, here the ‘scape being industrial rather than the gardens. It’s essentially a bunch of interlocking staircases (154 flights no less), that combine to provide a unique, honeycomb-like structure, seemingly inspired by M. C. Escher’s iconic painting Relativity. 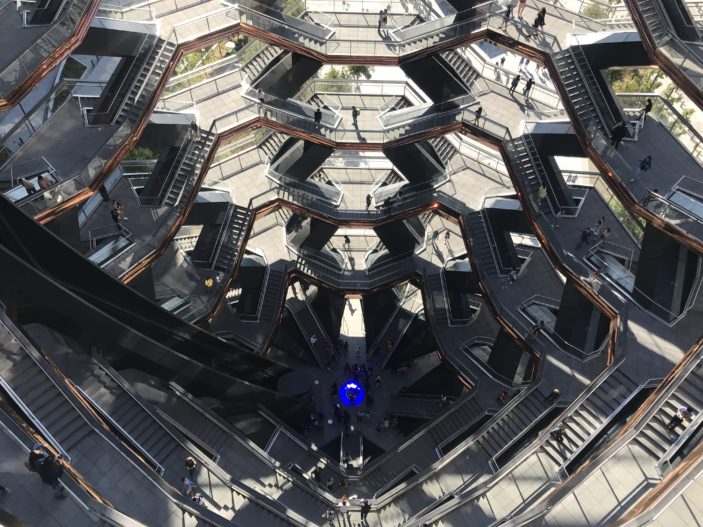 British designer Thomas Heatherwick is the mastermind of the work, which sits at the centre of the Hudson Yards Public Square and has no less than 2,500 steps. There’s an elevator too if you prefer not to take the stairs (or are unable to), which will take you to some of the 80 landings situated around the structure. No matter where you look, this is the sort of place people will be taking selfies – while some may be just enjoying their reflection. But that’s exactly what it was designed for, so expect to see your Instagram feed flooded with this one for the foreseeable future. It’s absolutely worth the visit.

Enjoy a concert at Pier 17 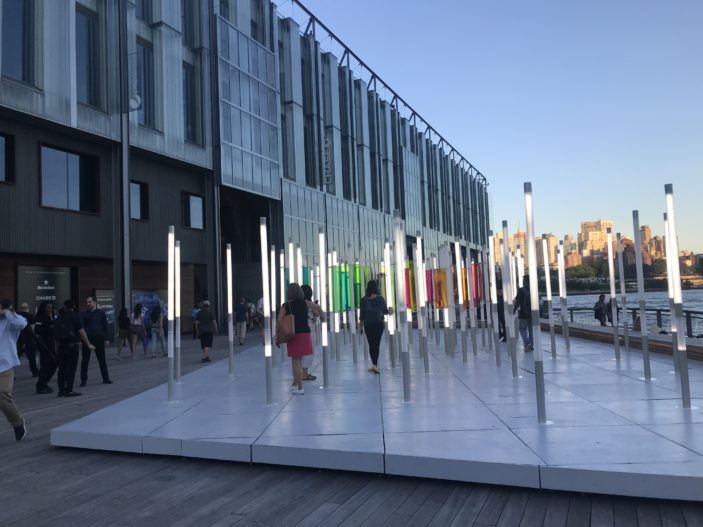 Against the backdrop of the Brooklyn bridge and the East River, the concerts on The Rooftop at Pier 17 are now in their second year, delivering an eclectic mix of performances across the Summer. Upcoming shows include Sheryl Crow, Ben Folds with Violent Femmes, Stray Cats, 21 Savage, Ringo Starr and his all Starr Band and more. And we recently caught The Lonely Island there too (read more about that HERE). The venue holds about 3,400 people when it’s a standing set up, and you’ll find some interactive artwork against the water too (pictured above). 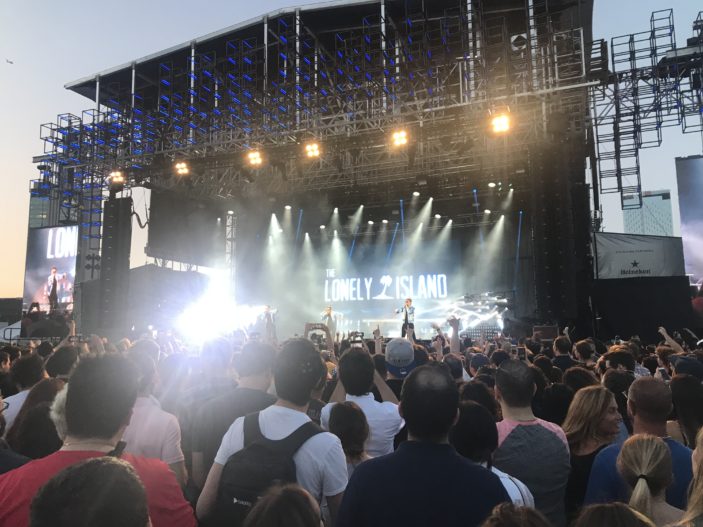 Check out the Time Out Markets

On the other side of the East River, in Dumbo, you’ll find the brand new Time Out Markets, which opened less than 2 months ago. The markets, which are part of the Empire Stores complex, is essentially a food court on steroids, showcasing some of the city’s best eats. 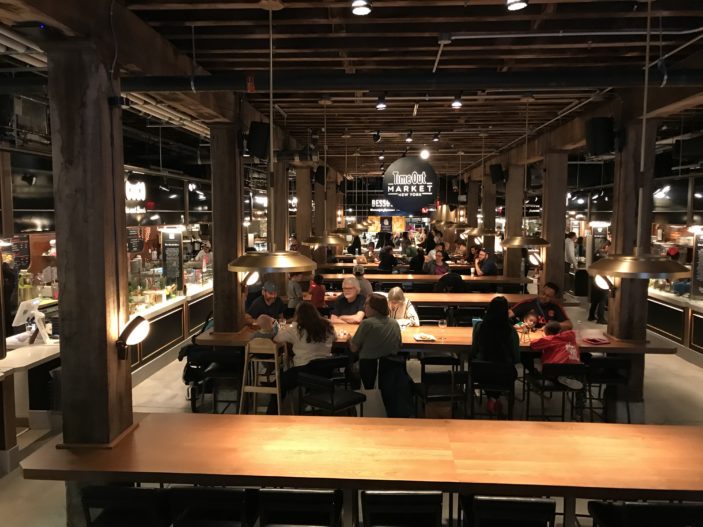 I got my mouth around some Mac n’ Cheese at Jacob’s Pickles (in this instance it was the Buffalo Chicken special). It was delicious. And true to the Time Out Magazine brand, screens on the walls ensured you knew what was happening in the city while you ate. 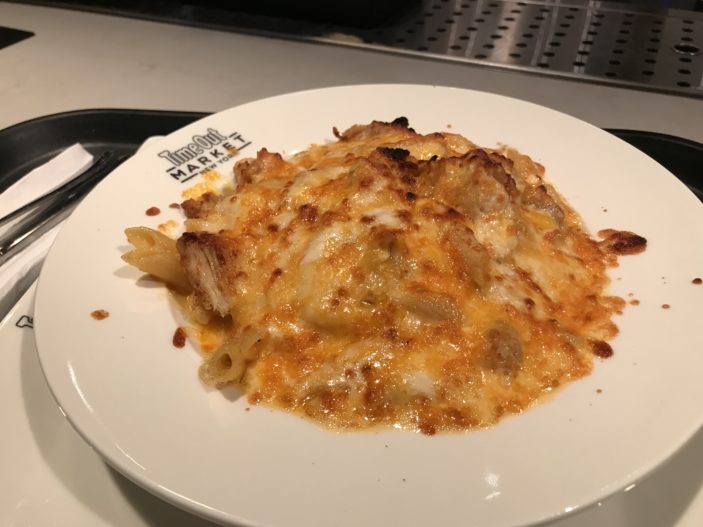 And they’re not the only new markets in town…

Meanwhile, over the other side of the Brooklyn bridge, the famous Essex market just reopened in a new spot, pretty much across the street. And the Canal Street markets have been there for a little over a year.

And music fans need to descend on The Met… 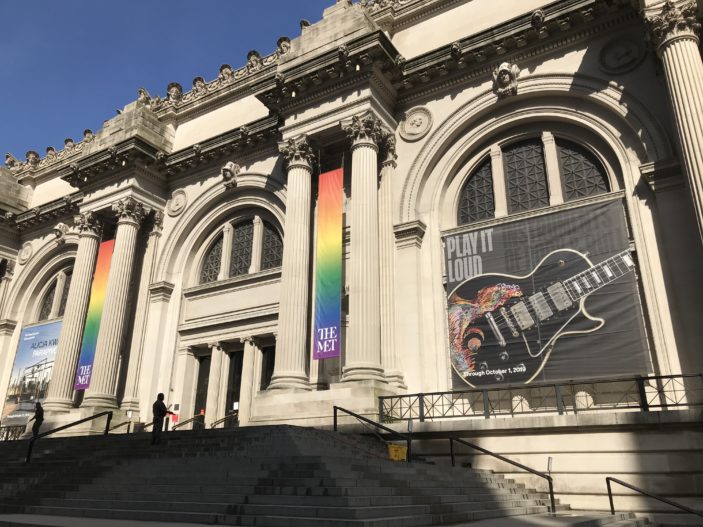 Alright so this isn’t down by the river, by since we got onto the topic of music, we have to talk about one of the most exciting exhibitions happening in New York City right now, Play It Loud: Instruments of Rock & Roll. It’s the first ever exhibition based on musical instruments themselves, showcasing the actual guitars, drums and more used by The Beatles, Led Zeppelin, Prince, Lady Gaga and many more. Beautifully presented, with video interviews and other accompanying material, you’ll see some pretty iconic memorabilia in here. It’s running until the 1st of October. Read more about the exhibition HERE. 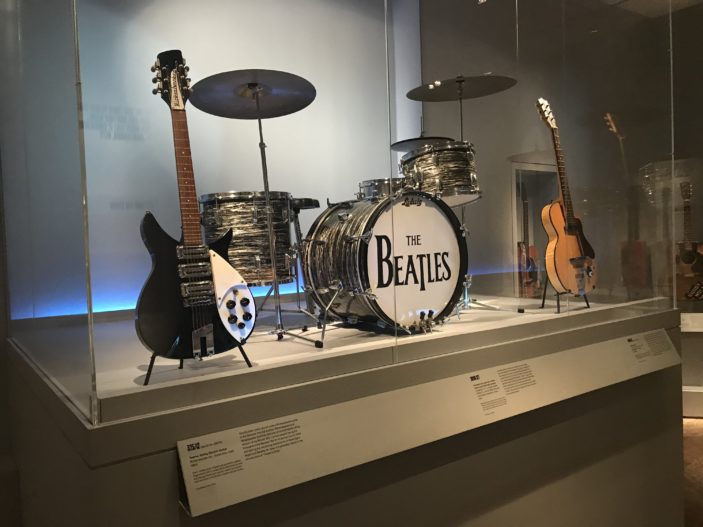 Also opening back in February was The Art of Music, which is “one of the world’s most diverse and important collections of musical instruments. With more than five thousand examples from six continents, it is unsurpassed in its scope and includes instruments from all cultures and eras.” It’s a spectacular, permanent exhibition that takes you through the history of music as an artform – and combined with Play It Loud, and the video installation “Death is Everywhere” by Ragnar Kjartansson (featuring members of The National and Múm), makes The Met a must attend attraction for music fans around the world. Who would have thunk it? 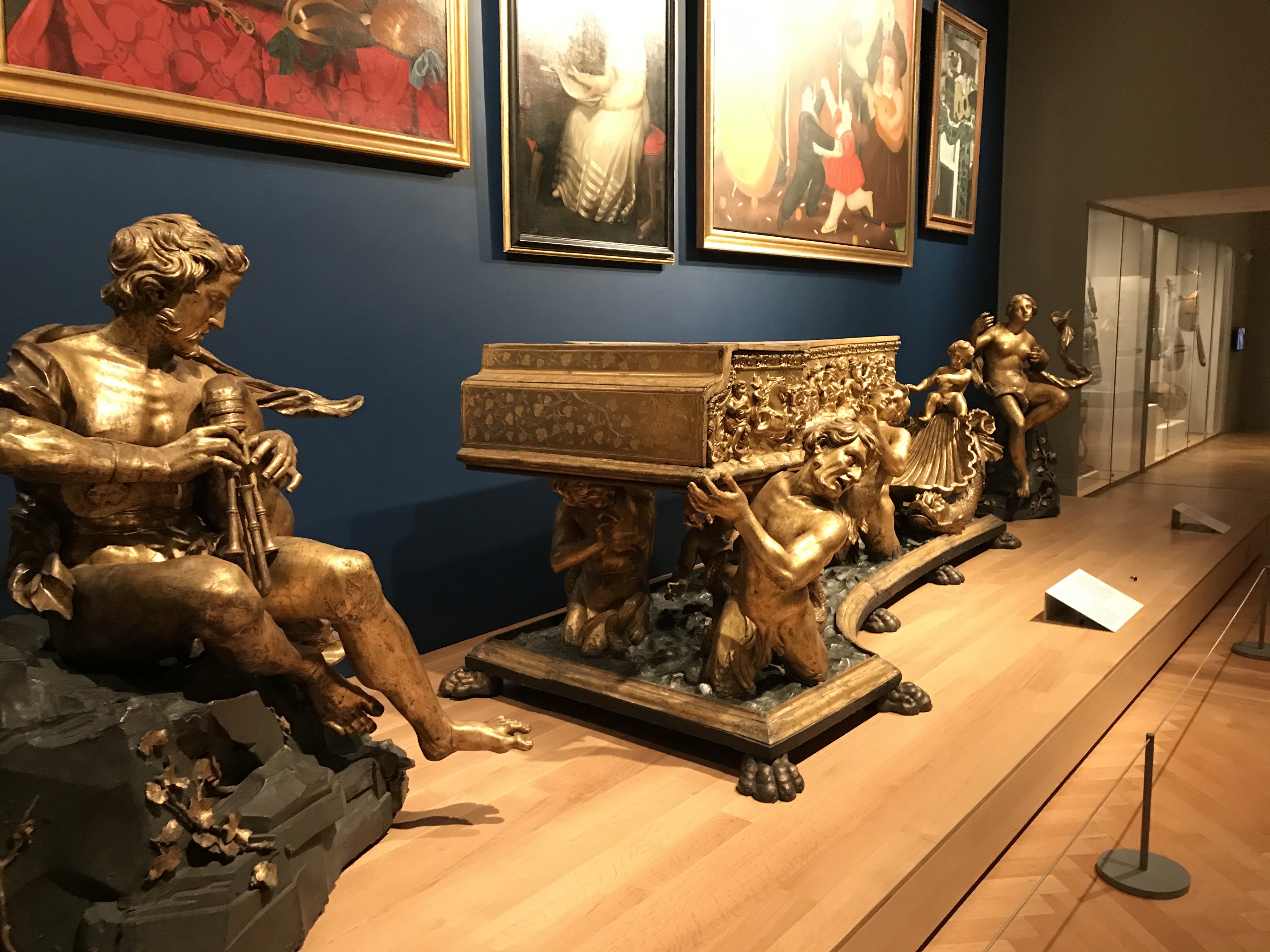 Getting to New York City

Virgin Australia fly daily to Los Angeles from Sydney, Brisbane and Melbourne, with connections to New York via Delta Air Lines. There are also connection services through Vancouver with Air Canada, and a variety of cities thanks to United, American Airlines, Hawaiian Airlines and Qantas.

While in NYC we stayed at the Hilton Midtown. To book a night, head HERE.

All photos by the author unless credited otherwise. Special thanks to Hudson Yards, Snark Park and The Met for accommodating the author.