Is flying from LAX to Sydney with Virgin Australia’s Economy X worth the upgrade?

Last month, I flew Virgin Australia from Los Angeles to Sydney, and was lucky enough to enjoy an Economy X upgrade en route – which means a great deal on board their Boeing 777 service. So, in 2020, what does that upgrade – which sits between Economy and Premium Economy – mean? And most importantly: is it worth it?

The Lounge at LAX

Virgin Australia don’t have their own lounge at LAX, rather surprisingly they use the Emirates Lounge, which is accessible to their Business Class passengers as well as those flying with Gold and Platinum Status Velocity cards.

They’re great in the lounge at coming around and making sure you’re not lining up prematurely – the screens were telling us it was time to board by they kept coming around to let us know the flight had been delayed and we could enjoy the lounge’s services – food, drinks and showers – until boarding started. In the end, boarding was about an hour late.

The food and drink selection in the Emirates Lounge is fantastic – with multiple choices for most beverages, and great food selection from paneer curries to fish and lamb chops, vegetarian lasagne and more. The showers are great – and even though there are only a few private rooms, I’ve never had to wait.

Economy X passengers get to board just before the main cabin – though if you’re a Gold or Platinum Velocity member you get to board even earlier. As is often the case, people start lining up well before they need to – so just make sure you’re in the right line and not standing amongst people who haven’t yet been called up to board.

The Economy X seats sit in their own cabin, right behind Premium Economy. The X cabin has 5 rows, and even with a baby in the row in front of me it was as comfortable as you’ll get in an airline, in any class. And you’re sitting over the wing which for me always manages to feel like a smoother flight.

The headrest is more particularly comfortable than I remember, easily movable with the side flaps, while the seats and the plane in general were in really good condition – I’ve mentioned in the past that some of their aircraft were starting to feel a bit underloved, but that certainly wasn’t the case here. The X seat comes with the same amenities pack that all economy passengers get – eye mask, ear plugs and a pen in a small bag. The difference is that the X cabin gets the same large noise cancelling headphones that premium and business passengers enjoy. And of course the extra legroom is fantastic.

It was a light flight and people moved around so I had a row to myself. As the staff themselves acknowledged, I was in a great position with the lack of bulkhead seat restrictions – though they did give me an option to take one of the bulkhead seats if I wanted it, as it’s certainly a preference for some. But not for me.

A 240mL bottle of Crystal Geyser water and arrival documentation is served as soon as the seat belt signs are turned off. The bottle is to be refilled at stations throughout the plane. The first meal service didn’t follow too far behind that, and of course being in front of the main Economy cabin, we got to enjoy it first. We had the option of a Korma Paneer Curry with rice, roasted Red Pepper Beef or a Sauteed Chicken. It comes as a decent sized portion in new eco-friendly trays, with a side macaroni salad and dessert, a milk chocolate moose with caramel sauce. 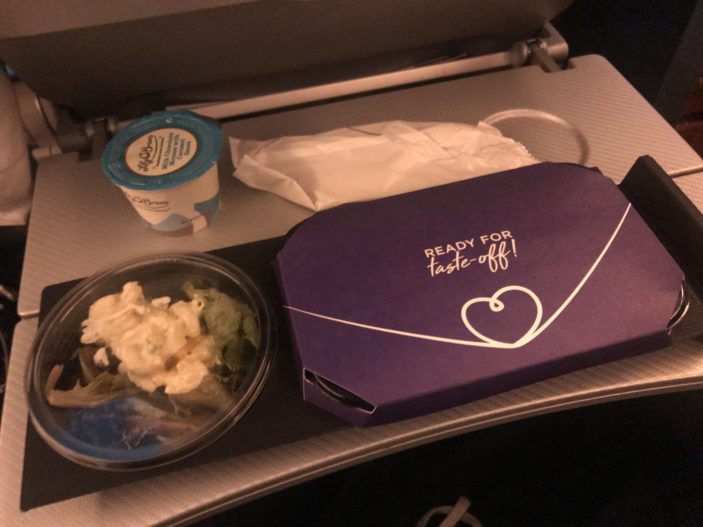 The quality of the food was fantastic, and I love the presentation. I had the Korma Paneer (the vegetarian option) and was impressed by the quality of the flavour. Drink service followed right behind the meal service, with wine, beer, spirits, juices, soft drinks, tea and coffee available.

A snack was served midway through the flight, though I slept right through it. Usually they serve a hot sandwich, or something of that ilk to keep passengers who can’t sleep going. Given how much I ate in the lounge though I barely needed the dinner as it was.

For breakfast, which was served two hours before landing, the options were French toast, Scrambled Eggs or a Frittata. And it was served with a yogurt. The eggs, which I had, came with a hash brown and a chicken sausage. It was also served in the “ready for taste off” packaging with the new trays. The quality was again excellent, though for my own flavour preference I made sure to add some tomato sauce (I always grab a packet from one of the take out places at the airport in anticipation for the meal).

The TV units on the back of the seats are touch screens with USB chargers built in; the headphones go into your armrest. Wi-Fi worked shortly after takeoff, too, and interestingly my phone’s date and time changed in flight, while it was plugged into the screen.

The entertainment in the units was great, with plenty of film and TV options – including entire series.

There was really incredible service all around, always with a smile – sometimes with a joke – and they never hesitated to get you anything you needed. We had some dedicated crew for our cabin who were remarkably helpful. They also never seemed to mind if we used the Premium Economy cabin’s toilets, which sit just in front of the bulkhead seats, and they were just that little bit nicer.

The delay may have frustrated some, but I loved it – it made it possible to sleep until later in the day (local time), which made it an easier day back in Sydney – though I was late to work. But what are you going to do?

While a small bit of extra leg room may be enough for some, it’s the other extras that truly make the Economy X proposition worthwhile. It’s the private cabin, dedicated crew, the access to better bathrooms (whether or not that’s an official part of the proposition though is up for debate), the noise cancelling headphones and even just being at the front of the Economy cabin – meaning you enjoy first choice of meals and a faster exit from the plane. There’s a lot to love about it.

While I’d selfishly love to see a discount for Gold or Platinum Velocity Frequent Flyers – the cost (a bit over AU$200) is very much worth it. And I know I’ve said it before, but it never hurts to ask for an upgrade when you’re checking in at the airport. If they’ve got room, you may get lucky – especially if you’re a frequent flyer. It was lucky enough to happen to me, though that’s hardly the rule of law. It just happened to be a quieter flight.

How much does the upgrade cost? On the Sydney to Los Angeles route, the upgrade starts at $229.

Head HERE to learn more about the Economy X experience, and head to virginaustralia.com to book your next flight with the airline.

The author flew at his own expense with an upgrade provided by the airline.