Are Budget Flights in Europe Really That Bad? We fly easyJet from Amsterdam (AMS) to Berlin Schoenefeld (SXF) 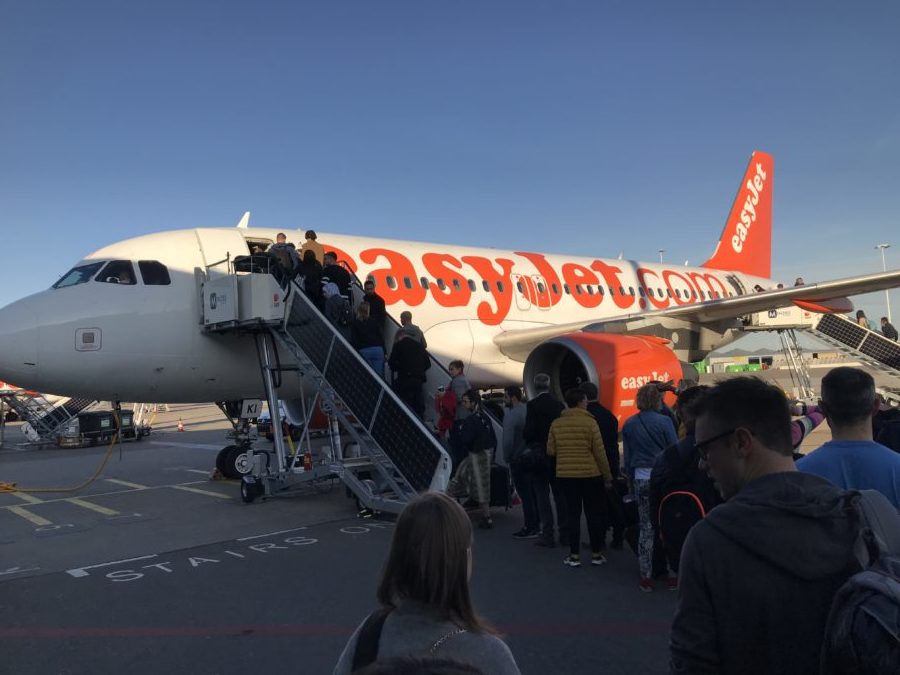 Back in September, I flew with the Luton based budget airline easyJet from Amsterdam to Berlin’s budget terminal, Schoenefeld. It’s putting it mildly to say that budget airlines in Europe get a bad rap – but unlike a lot of other places on the planet – I’m looking at you North America – the price difference in Europe between budget airlines and the rest is often staggering. What might cost 300 Euros on a carrier like British Airways, could be 40 Euros on an airline like easyJet. So you definitely go into the experience with limited expectations. So keeping that in mind, let’s take the trip…

Checking In and Baggage

Check in took place online 48 hours before the flight, and they allocated your seat at that time – assuming you didn’t prepay for the service. Baggage should be prepaid too, and you only need to line up at check in should you have a bag to drop. Otherwise just proceed to the gates. The bag drop was a quick moving line when I arrived, and between it and security we were at the gates in about 10 minutes. Couldn’t have been easier!

About The Departure Airport

Pro Tip: If you’re not staying in Amsterdam too long, consider leaving your bag at the airport when you arrive. It costs just 9 euros per 24 hours for bags you’d store in the hold.

The flight departed from the M gates; a newer area which is separated from the rest of the airport, so it has a pretty easy moving security line and a holding area before they announce your gate.

There’s not many options in terms of food and shopping though, so unless you’re in a rush you’re better off eating on the other side of security, where there are mountains of food and shopping options including a supermarket, restaurants and most cuisines. At M, you’ve got access to a small duty free store, a Tommy Hilfiger store, a cafe where you can get scrambled eggs for 10 euros, and a market where you can pull some food out of the fridge, or grab a toasted Panini. There are 7 gates, which you head to 40 minutes before departure. They only announce which gate you’re leaving from at that time. And from there you walk out onto the tarmac and board the flight as pictured above.

The easiest gripe about these planes are the seats. Leg room was non existent, and the seat in front of me could barely fit my backpack. There was no seat recline, no headrest, though there was a pouch on the seat in front of you with a magazine, a bistro brochure and the usual sick bag and safety magazine – which some competition has removed completely. I was in the back seat though so I would be used to getting no recline in that position, and I think flights like this are far better off for having a lack of recline. You’re on the flight for an hour, and it just makes the experience more comfortable for everyone. Or equally less comfortable? However you want to look at it.

I’ve got to say that in spite of all of this, I was fairly comfortable, and the plane was on the newer side of life, which was a bonus. 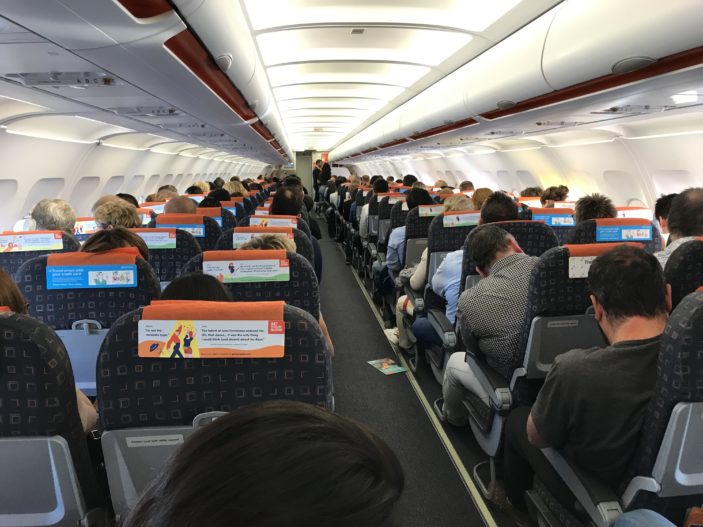 There’s none to speak of, and no Wi-Fi.

The meal service was right after take off, with food and drink available for purchase. Prices were pretty reasonable – 4 pounds or 4.5 euros for a croissant with a tea, for instance. The quality didn’t look too bad and they were quick and efficient with their service.

Speaking of service, I found them really easy to deal with, and as pleasant as can be from start to finish. You’d have to have the patience of an angel to work for a budget airline – which I’m sure it putting it mildly. And this crew certainly seemed to!

About The Arrival Airport (SXF)

You disembark from the forward and rear doors straight onto the tarmac, as you did in AMS. But here you jump onto a transport bus. Berlin Schoenefeld is the secondary, budget airport in Berlin, so it’s a bit further out from the city, but it has a train that runs to and from it, making for an easy transit back into the City Centre.

When you say you get what you pay for with a Budget Airline in Europe, you truly do. It’s a cheap, no frills flight. They’re not pretending to be anything they’re not, or offer anything more. But to have next to no line for security and a newer aircraft – things like a lack of seat recline suddenly seem inconsequential. And when you’re in the air for an hour, it really is. Even though I love my creature comforts on an aircraft, and lounge access and all the trimmings, when I’m able to pay 40 Euros and have an easy experience like this (no pun intended), it’s hard to argue that you need anything more than that. After all, by the time you’ve taken off and watched an episode of something on Netflix, you surely wouldn’t have time for such an argument, because you’ve already landed.

To book your next flight with EasyJet, head to easyjet.com.

The author flew at his own expense. Photos by the author.