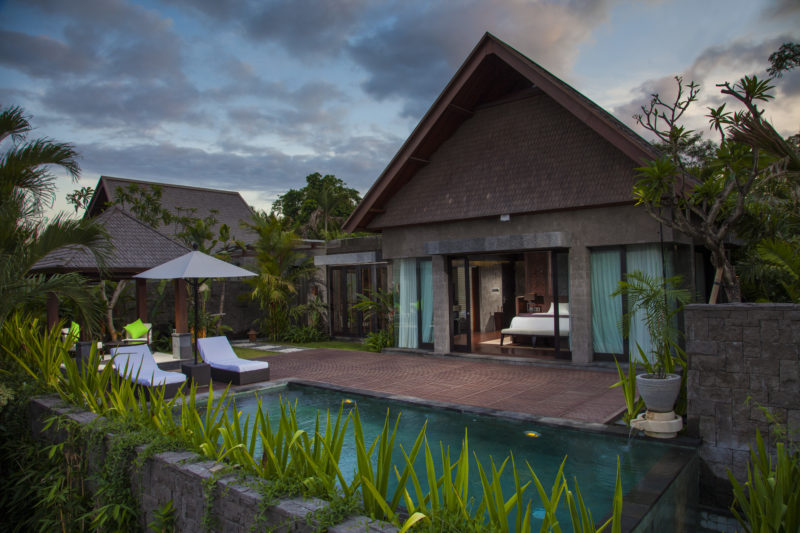 You don’t have to look hard to find a picture-perfect villa in Bali. The shimmering private pool, the immaculate bathroom and the lofty bedroom – and we’re just talking about the small ones – is the now generic Villa recipe plastered all over social media (mostly Instagram) every single day by people living out their ideal vacay on the Indonesian island. You’d be forgiven for being a bit cynical about it all, but it’s not exactly like these villas aren’t the real deal.

Sure, Instagram has by and large outweighed all of its positive social impact as a platform, unwittingly encouraging a society that values superficiality (don’t get me started on Twitter), as well as #influencers with engagement that is at best transient, and at worst completely manipulated. Regardless, there are few places in the world where you can get this kind of luxe living at such an affordable price; the photos aren’t lying.

The typical Bali villa is very much a worthwhile experience, despite its desensitising omnipresence on your feed. While there are only a handful of resorts and properties on the island that really take the package to the next level, sometimes it’s better to just experience a straight-forward, nicely executed, “playing it safe” villa. That’s what The Sanctoo Villa is for me; nothing particularly noteworthy or unique on the island – other than the fact that it’s attached to Bali Zoo (more on that later) – but a pleasant and polished experience.

Let’s get the good stuff out of the way first. Sanctoo, named for the Latin term meaning “sanctum”, may be fairly off-centre for those who want to be close to tourist favourites like Seminyak and Ubud, but its (almost) mid-way point between two of Bali’s best areas does have great benefit. It’s closer to atmospheric Ubud, where tourists will find fantastic dining (check out Hujan Locale for some great food) and exceptional bars (like the great Jungle Fish and vibey Night Rooster). That is a very valuable location to have, seeing as coming to Ubud from anywhere else will lock you in to ridiculous traffic jams. Similar applies to Seminyak, meaning those staying at Sanctoo have decent access to both areas without having to pick one over the other. For perspective: Sanctoo is around a 40 minute drive from Seminyak, and a 20 minute drive from Ubud, with average traffic factored in.

Then you have the actual experience. The service is as excellent and friendly as anywhere else in Bali. Staff are thoughtful and diligent, quick to make sure the mental switch from chaotic traffic to relaxed private villa is immediately flipped as you walk into the modest open-air lobby. Check-in is quick and painless, with a buggy all ready to whisk you to whichever of the two villa categories awaits – a One Bedroom Garden Pool Villa, or a One Bedroom River Pool Villa (totalling 12 villas).

My Garden Pool Villa felt surprisingly private and cut-off, considering the close proximity of some of the others. Aesthetically, the biggest strength here is the gorgeous frame of local flora that has been carefully laid, snaking around the villa on all sides to create colourful edges that make relaxing on the outdoor private deck all the more special. Each of the villa’s three main spaces are generously sized, from the sprawling pool deck that leads straight from the bedroom, to the enormous bathroom with a ridiculously large deep soaking tub in the middle.

Smaller details include a decent Bose Bluetooth speaker near the king (or twin double) bed, an espresso machine and a 43″ LCD TV with a large selection of cable channels. Rarely do such amenities make a difference to my short one or two night stay in hotels, but for longer term guests I would imagine these would be welcome additions. The Wi-Fi was lightning fast and didn’t drop out: that was enough for me.

A must for guests is an affordable treatment at the property’s boutique spa. Small treatment rooms are open-air and face directly out to Wo’s River gorge; the soft sounds of a waterfall float through the air while staff deliver gentle Balinese massages. It would have been around a 8-10 minute walk from my villa, but seeing as there aren’t many villas on-site, there should be a buggy available at all times.

Also near the spa is the property’s restaurant, a large boarded space overlooking a jungle – a common sight in Ubud, but never something one would tire of, especially when the cocktails are plant-based and uniformly excellent. The food is satisfying enough, though guests with the means to do so really should be making the most of their proximity to Ubud. The restaurant is where the breakfast is served every morning for guests, but you won’t find that many of them actually go to it in the morning, given that Sanctoo Villa offer the classic Balinese “floating breakfast”. Basically, this means that you have breakfast served to you in the villa, placed on a large tray floating in the pool, so you (and your villa buddy) can eat while in the water. The food itself isn’t anything of particular interest: standard breakfast staples like fresh fruit and eggs, as well as more local dishes.

Now onto the more controversial part of The Sanctoo Villa experience, and why it won’t be for everyone. As mentioned above, Sanctoo is part of Bali Zoo. It is still quite the popular destination thanks to their close animal encounters like “dinner with the elephants”, where guests can feed elephants, take selfies with an orangutan, and enjoy a generous buffet; and “breakfast with the orangutans”, which is much of the same, just in the morning and with more of those adorably mischievous apes.

Last year it was widely reported that 100% of Bali animal tourism venues fail animal welfare standards. Bali Zoo isn’t exempt from this. While what I saw was nowhere near as bad as what I’ve read – during a night time show, animals weren’t performing any tricks outside of following food – it’s become increasingly difficult to tell what is being obfuscated and what isn’t when it comes to animal tourism in South East Asia.

I was told that Bali Zoo are phasing out elephant rides over the next few years (I’m not sure why they can’t just stop doing it sooner), which is definitely a step in the right direction. Whether this is a consumer-driven play or a genuine want for change is debatable, but at least there is increased recognition and demand for more ethical ways in which animals can exist in the tourism industry. As something positive, the zoo does have a remarkably large (larger than most others I’ve seen) pool for elephants to bathe in, and this is able to be viewed directly from the on-site restaurant where those aforementioned buffets take place.

Although, the elephants’ pool is probably the largest environment built for an animal that I saw in Bali Zoo. Most of these enclosures could stand to be larger, and my behind-the-scenes tour didn’t really inspire much confidence. Sun bears were kept in paltry cages, as were the orangutans when they weren’t allowed out into their enclosures. It was a depressing sight.

There isn’t such a clear-cut solution to changing animal welfare for the better these days. I know the political want of today’s generation (naively) ignores nuance and complexity, but it’s important to remember that there are livelihoods attached to these animals, so it’s not as simple as saying “this is bad, you are bad, stop doing it”. They won’t listen, and scolding them will likely have a counterproductive effect.

There is a place for zoos, and many around the world are doing some excellent work to genuinely progress down the path of conservation, but I feel the widespread problem in South East Asia is only now starting to be addressed on a wider scale. It remains to be seen whether Bali Zoo start leading the way in ethical tourism, much like a few of the more sincere Elephant sanctuaries have been doing in Phuket and Chiang Mai.

It’s no longer just those working behind the scenes that really give thought into how these animals are treated, but consumers are now more aware, and they are demanding ethical encounters that lean towards observation and appreciation rather than intensely close interaction, which can be confronting and uncomfortable for animals. Sure, we can take the strict route and tell others to not support venues like Bali Zoo no matter what, but what happens when the funds start drying up for these venues? They may push these animals harder. There will always be customers who just don’t care, no matter how much others do.

The best outcome for these zoos is for consumers to not take away their income, but encourage them to re-direct and manage it better. Animal welfare should be of paramount consideration for these places, and if it takes consumer demand to change that then, even though the progress may not start off genuine, that should be encouraged. So when you go to Bali Zoo, don’t buy into anything like elephant rides, and do your own research to decide how best to interact with these animals. Ask questions, express concern – show staff that you are one the many modern travellers who are starting to learn more about the issue of mistreatment in animal tourism; they will see that demand is changing. Remember that there is no way for you to actually know what an animal goes through in order to make them obedient.

As for bathing elephants? You may want to do your own research on that one as well. During a visit to an ethical elephant in Phuket recently, I was told the seemingly harmless activity of bathing elephants, that many of these venues offer, can also be distressing for the animal if there are numerous groups in the water with it at the same time. In the past few months, Bali Zoo have introduced a program where you can give elephants a mud bath. If it’s just two or three people, then it seems to be less of an issue, so if you participate you may want to make sure that only a very small group is interacting with the elephant (from the front, don’t stand behind them).

When it comes to Sanctoo Villa, the accommodation is worthwhile and beautifully done, if not unremarkable. But when it comes Bali Zoo, you may want to carefully consider whether it’s right for you. As a whole, it’s a complicated experience, but if you’re just looking for a nice place to stay for a few nights between Seminyak and Ubud then Sanctoo is a great choice. Note that the below review score is about the Sanctoo Villa & Spa experience only.

The writer stayed as a guest of The Sanctoo Villa & Spa.