As part of Marriott’s highly regarded “Autograph Collection”, the one of a kind Press Hotel in Portland, Maine is a shining example of the kind of magic one can spark when channeling a building’s history into something new and exciting. In this case, it’s the site of the old Portland Press Herald newspaper, the state’s largest newspaper which occupied this address from 1923 up until 2010. It was purchased by local real estate developer Jim Brady in 2012, and three years later reopened as the New England city’s very first lifestyle boutique hotel.

Standing far enough from the historic Old Port district, while still part of the endlessly charming cobblestoned neighbourhood – home to many of Portland’s best dining spots and trendy cafes – The Press Hotel has rightfully become one of the most respected properties in Portland.

The city is consistently ranked near the top of the country’s best food destinations to absolutely no surprise, and given its fine location, The Press Hotel is a nice anchor for all that wining and dining. In fact, their resident restaurant UNION is one of the strongest in the area. Guests are spoiled with the a la carte breakfast in particular, bringing in options like a fresh two-egg omelette with plenty of add-ons, including a Maine cold water lobster, as well as the likes of huevos rancheros and tartine style smoked salmon. The dinner menu is just as tempting, with options like a braised rabbit fazzoletti pasta, truffle beef pot roast with market vegetables, and Gulf of Maine sea scallops with crisp pork shoulder.

Of course, you’d be missing out by not exploring the rest of the city, from hipster haven Thompson’s Point to the famous Portland Head Lighthouse, and the fact that the hotel offers a complimentary shuttle service to and from many points of interest is a huge leg-up for guests who may not have more than a few days to explore.

Art is central to the property, and almost everything lovingly circles back to the print and media industries. Different types of font and lettering make up large art pieces, along with a centerpiece of vintage typewriters stuck to a feature wall in a whirlwind pattern, complementing the standalone typewriters which adorn the lounges in the lobby, available and ready for guests to use to type out whatever they wish. The building retains most of the original’s architecture, so there’s plenty of old-warm charm bouncing from these walls, from the polished reception desk beaming with classic hospitality, to the stylish Inkwell Bar found just past the cosy fireplace.

Nods to the building’s history don’t stop there. A scale once used for weighing down rolls of newsprint can be found at the moderately sized and comfortable fitness centre, while the hallways that lead to all 110 guest rooms are plastered with headlines for the newspaper’s past. It makes for a different kind of museum, one which tells the story and history of Portland through the many substantial – and trivial – happenings since the Portland Press Herald was born. Look down and you’ll notice white letters woven into the carpets, another subtle but effective nod to the written word.

My Superior King room is around 28sqm of vintage inspiration, translating a small office into a space that maintains a strong connection to its history. Character is built on a base of neutral colours, livened with antique furniture like a leather writer’s chair with a literary quote on the back and juxtaposed against a tech-forward design. Connectivity is of no concern, with ample plus and USB sockets around, and while there are some lamps, you don’t have an overwhelming amount – as many antique hotels do – that you need to run around switching on-off when it’s time to go to sleep. 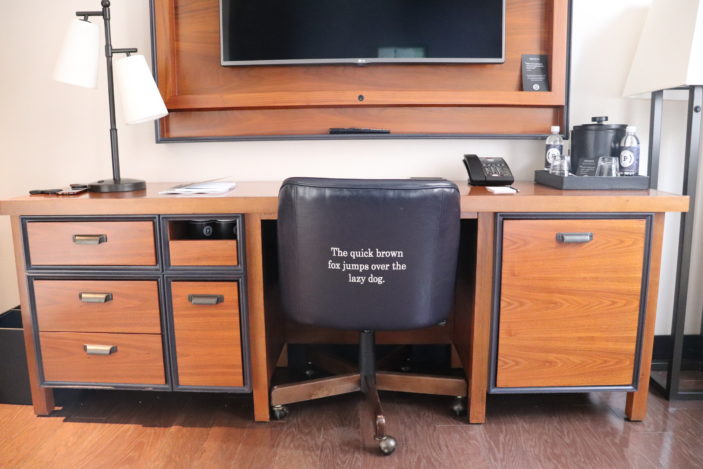 When it’s time to rise, just make sure you’re opening up the room’s many tile windows by the bed, filling your quarters with the salty air of the nearby port.

A creamy leather headboard stands over a comfy King, with supremely soft and silky Frette bed linens and a sightly Brahm Mount Herringbone bed throw for a little extra character. The mini Bluetooth stereo isn’t the best quality, but it hardly offers something most modern travellers don’t already have tucked inside their suitcase anyway. A decently sized flat-screen HD is wall-fixed directly opposite the bed, above the writers desk, nicely set against a timber cabinet. 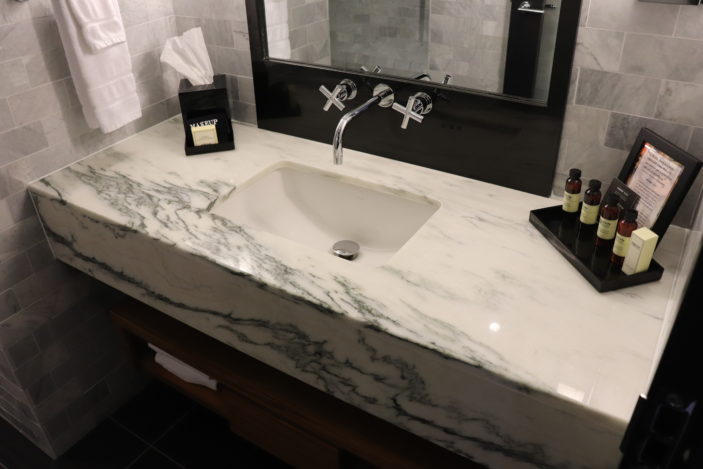 The spacious marble bathrooms are another big plus for this entry-level room category. It’s not overly showy, but nowhere near disappointing, with it’s premium Bigelow amenities and comfortable rainshower.

The many architectural details and thoughtful touches that have reinvigorated The Press Hotel is reason enough to place this amongst one of the more charming hotels I’ve stayed in through North America. Add in exemplary service, an exceptional restaurant, prime location in Old Port, and a lobby you’d actually want to hang out in, and it’s easy to see why this is one of New England’s most popular hotels.

The writer stayed as a guest of The Press Hotel.

All images not marked as supplied were taken by the writer.