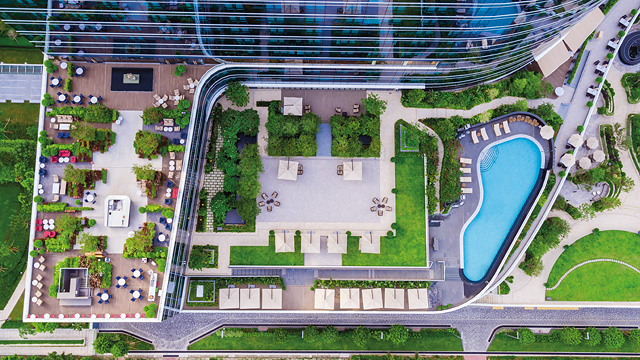 Ever since Kerry Hotels launched as a brand back in 2011, it has been well received as a fascinating, and interesting, expression from Shangri-La Group, who are best known for their opulent namesake properties. While Hotel Jen, another critical darling from the group, plays more in the mid-range category with a strong commitment to design and character, Kerry seems to be represent middle ground between the two – Jen and Shangri-La. It’s a great space to play in; combining a strong sense of individuality and accessibility, with Shangri-La’s famously ritzy, high-end glamour. Most importantly, it works; at least that’s the impression I got from two nights spent at the brand’s kinetic Hong Kong iteration, which stakes a sizable claim near the edge of Victoria Harbour on the Kowloon side of the city.

Kowloon just refers to the side though. The actual location is far less central, that being the distant but well-connected Hung Hom. Kerry Hotel stands just in front of Hung Hom Ferry Pier and a large bus terminus that can send people all over the city. What’s more is that the MTR station in Whampoa (a shopping mall in a landlocked ship) is just a short five-minute walk. It may not be the best MTR line in Hong Kong (you’d have to change trains twice to get there from Central), but it certainly makes up for not being in the thick of popular neighbourhoods like Tsim Sha Tsui, SoHo, and Mong Kok.

Furthermore, the pier is currently only serviced by New World First Ferry, as opposed to the more ubiquitous Star Ferry. That’s still fine too; you can simply catch the ferry direct on over to North Point and take the short walk to MTR, from there you have a straight line up and down Hong Kong Island which will take you to some of the city’s most exciting neighbourhoods, like the aforementioned Central, SoHo, Wan Chai, Causeway Bay, and – my favourite – the hilly hipster up-and-comer that is Sai Ying Pun.

The building itself is an interesting, 16-storey promise of luxury. Plenty of expansive green spaces protrude on wide, jagged terraces while the core is slightly curved, towering over the neighbouring areas like the “urban resort” described in its brief. It’s neither fully a resort nor hotel, bridging the two with pieces plucked from each category. Famous designer André Fu certainly has poured a lot of thought into this one, considering wide open public areas and sociable meeting places to welcome both Kerry’s guests and the locals who show out in style, if not to live it up at the property’s gorgeous Red Sugar bar and its highly coveted outdoor wraparound terrace, then to eat at Big Bay Café or mingle at one of the hotel’s most interesting features: the independently operated Dockyard, an international tech-forward food court within the hotel that makes use of QR codes and a smartphone app so you can order food to your seat easily and quickly without even having to speak to anyone.

Dockyard is particularly valuable for those who want easy access to various cuisines, including Indian, Vietnamese and Korean. Locally famous business Sister Wah, known for their fatty beef brisket noodles, even has an outpost here, as does Starbucks oddly enough. 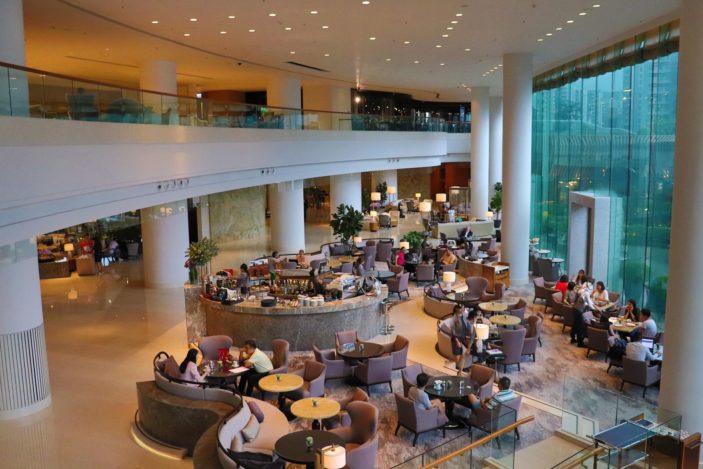 The lobby is enormous, immaculate in appearance with the most eye-catching element being a 50-metre marble Turkish onyx wall, scaling a sightly grand staircase which leads up to the Grand Ballroom. Tall curved glass windows peek out onto a beautifully landscaped outdoor garden while people – both suited up and dressed in casual gear – lounge about a small central bar that serves up Asian-inspired cocktails and homemade soft drinks. It doesn’t seem like Shangri-La can stay away from these big statements – nor should they, the lobby is an appropriately large space that translatess the true scale of this hotel. Kerry boasts a whopping 546 rooms, five restaurant and bar areas, multiple terraces, a luxury spa, a 25-metre outdoor infinity pool, huge and versatile event spaces (even an independently owned coworking space), and one of the best fitness centres I have seen in a hotel to date.

My Club Premiere Sea View Room was a generous 60sqm space with substantial views of Victoria Harbour, relying on natural light to come in and illustrate the muted palette, which opts for subtle and safe design over anything too showy. The floor-to-ceiling glass windows maximise the location, giving you front row tickets to the spectacle that is Hong Kong Island and its busy harbour, unpredictable weather, and attractive skyline. My specific room was located a bit too far to one side to offer any view of Hong Kong’s nightly Symphony of Lights show, but that was easily viewed from the downstairs infinity pool and its ample surrounding terrace.

The room boasts powerful air-conditioning, a great layout with plenty of international power outlets and a small round glass table that makes a nice substitute for an actual work desk. A plush corner sofa stretches out next to the window, making an ideal spot to sit and watch boats zip back and forth between the two sides of Hong Kong.

Instead of sticking a power point on the wall next to bed, it is located in a drawer next to the bed; an odd choice, but nothing too radical. The light switches are thankfully labelled, and there’s a master to shut everything off at will. Clearly this is a room that values practicality as much as it does design, and the small touches certainly help alongside the grand features you’d expect from a luxury hotel: exceptionally comfortable king size bed, spacious marble bathroom with a large rain shower, deep tub, and – surprisingly – a small ledge in front of the toilet you can use to place your wallet/phone. Smart, functional, and consistent with the property’s luxurious common areas.

Fu’s fluid design not only includes a multitude of greatly finessed and impressively large outdoor areas, there are also plenty of hidden nooks for privacy. It’d take a few days stay here to uncover them all, but there are plenty of options for those who want to sit outside with a good book and a quiet spot, or roam around to the less populated spots of the hotel and follow a trail of elegant art pieces, which add plenty of character to the hotel as part of a highly curated collection.

If you have access then head to The Club lounge for a luxurious breakfast (think a la carte options like Lobster Eggs Benedict), but you’d want to go to Big Bay Café at least once. The sprawling all-day dining restaurant features one of the most impressive breakfast (and lunch) buffets I have ever seen, operating on a large-scale with seven individual pavilions separated by cuisine and cooking method, with an extra dessert oasis in the middle. In the afternoon, the European deli and Japanese/Korean stations are the first things you’ll see on entry, and for lunch this means a do-it-yourself Bibimbap option, fresh sushi prepared right in front of you, or piles of cheeses and artisan bread. And yes, the sushi is quite good. Just leave room for all the dim sum you’ll find displayed at the other end of the café.

I wasn’t as impressed with the hotel’s signature restaurant Hung Tong, which is pushed as a modern interpretation of Cantonese food. It’s all dark and sleek with exposed brick walls and pops of bright red, a popular and well planned space with a charming atmosphere. The menu reads well too; there are some nice combinations, like the crispy Grilled Eel that has been tossed with Osmanthus Honey Sauce, the simple but moreish Deep-Fried Crispy Tofu with Spiced Salt, and the sickly sweet but satisfying Barbecued Prime Iberico Pork with Maple Syrup. But confused dishes like the bland Steamed Fresh Crab Claw with Truffle and Winter Melon, and forgettable Marinated Pig Trotters make it clear that not everything here works. The Dim Sum menu looks fantastic though, so perhaps this would be a better spot for Yum Cha.

While there is no way a hotel like this would risk having anything but a perfect spa experience, I sadly didn’t have time to indulge in the artful looking treatment menu. Though I did get to briefly check out the jaw-dropping 24-hour Base Camp Kerry Sports, the hotel’s fitness centre and program. As mentioned above, it’s one of the most impressive I’ve seen in a hotel, with a myriad of free weights and machines in ample spacing and air conditioning. It very much looks and feels like the type of premium standalone gym that’d cost a fortune in yearly memberships, even more so if it had the type of view Kerry has. In a perfect example of how the design has maximised the location, the spin room looks out over a wide view of the harbour, with all machines facing the large, impeccably clean glass windows. The gym also seems to offer plenty of outdoor activities as well, justifying the odd name by taking its fitness philosophy beyond the hotel’s doors. 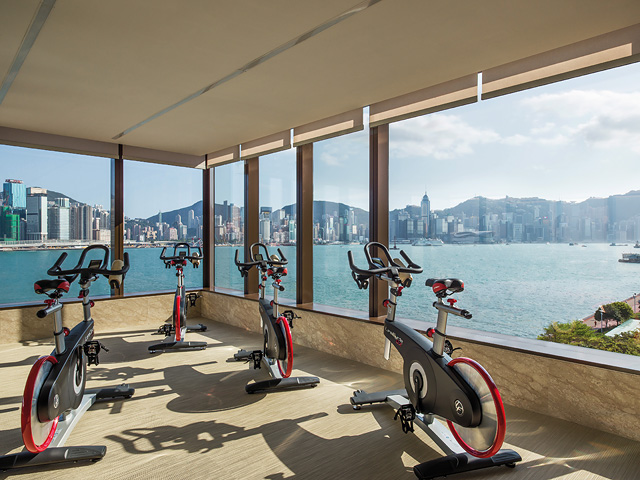 If this is how Kerry operates in Hong Kong then I’d be very interested to see what the brand has done in other cities, and continues to do as it grows from it’s relatively young years and fully leaps out of Shangri-La’s sizable shadow.

The writer stayed two nights as a guest of Kerry Hotel.