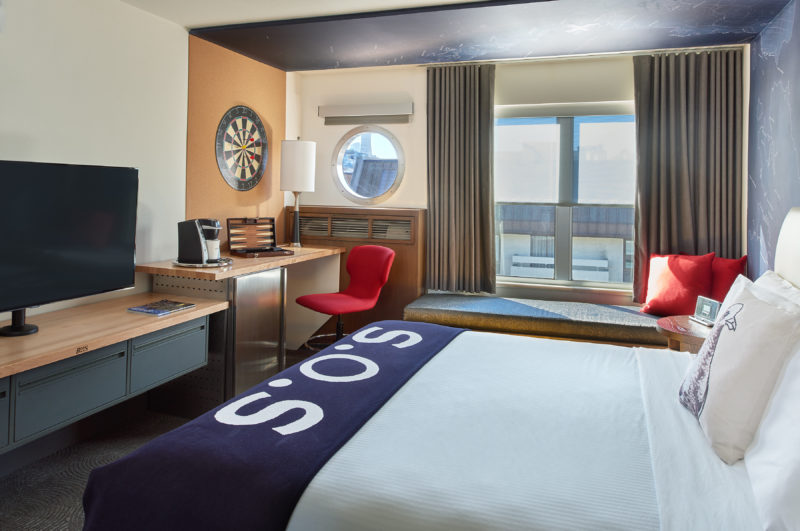 You’d be correct in assuming that San Francisco claims some fantastic boutique hotels across all price ranges. After all the city has long been known as one of the most creative and free-spirited in the U.S, and it’s hotel scene has benefited greatly from all that openness. From the beatnik throwback of Hotel Boheme and Alfred Hitchcock homage Hotel Vertigo, to retro-minded Hotel Rex and hipster haven Hotel Zeppelin, there are many different faces to the city’s warm hospitality, spread evenly throughout its many distinctive neighbourhoods. Hotel Zephyr stands out on that long list of San Fran’s best regarded boutiques, and, after spending two nights there, the reasons are clear.

First off, the property has an enviable location near the heart of Fisherman’s Wharf and almost opposite Pier 39. It’s a short walk to some of the best shopping and dining (and the late-night buzz of In-N-Out) on the northern waterfront, with the entrance tucked one street back from busy Jefferson Street. First-timers in San Fran will find a lot to love here, with the city easily accessed via nearby transport which includes the Powell cable-car to Union Square and numerous streetcars connecting with BART lines. And yes, there are water views, although you’ll need to grab a room on the top of the four-floor hotel.

The most charming element of Zephyr is the design and its social-minded layout. A nautical theme has informed much of what you’ll see here, but the brief often strays just enough to have a bit of fun with pop art and, funnily enough, steam-punk. Aside from the colourful octopus murals and cabin-like guest rooms, there’s plenty of upcycled material used for twisted metal sculptures in the hotel’s glorious courtyard (dubbed “The Yard”), or old port signs bent and turned into chairs. Kids will have fun with the ping pong, pool and connect-four games that lie between the lobby and the courtyard, while those of drinking age will likely be found around The Yard’s giant firepit, which is mostly made from recycled soda cans, craft beer in hand, soaking up an atmosphere that’s very much like the sprawling adult playgrounds of Europe’s biggest hostels. From my experience, there also seems to be a big local presence popping into Zephyr for regular events, if not to visit the permanent vintage food camper van posted up in the courtyard, dishing out hot pizza and light lunches. 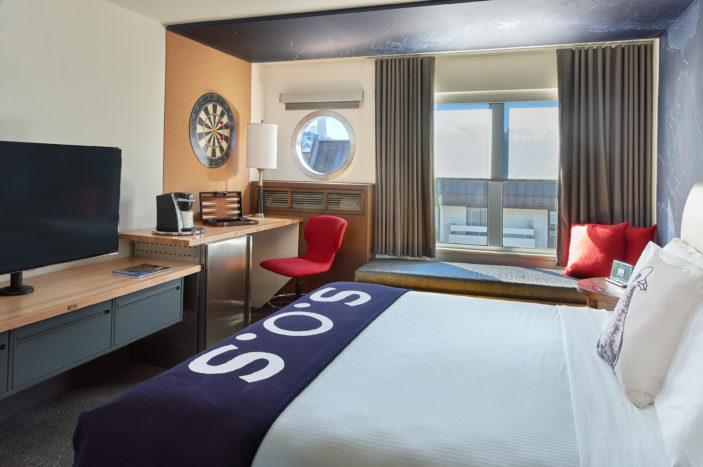 The entry-level guest rooms aren’t quite as quirky, although the nautical theme is best represented across these 360 rooms and suites. Those lucky enough to nab a family suite (for 4-6 people) can expect those aforementioned water views, pulled in through floor-to-ceiling windows, but anyone on the lower levels will have to make do with something a bit less jaw-dropping. Though, these standard rooms are still nicely done and consistent with the marine theme, with a cruise-ship style layout, buoy-like light fixtures and a porthole window, plus dart boards (just for fun) and a comfortable king-sized bed with blue bedspreads reading “S.O.S”. The bathrooms are cramped and look rather unattractive with their ostentatious sparkle bouncing off the silver basin, but if all you want is a hot shower-tub and somewhere to brush your teeth then there’s little to complain about. A medium-sized smart TV, docking station and ample USB charging ports should keep business travellers happy.

With no actual restaurant, those waking up early won’t find any of the usual breakfast spreads downstairs. Instead, there’s some decently priced pastries and coffee from the courtyard camper. You’re best off heading on down to explore the waterfront’s many restaurants, most of which do up a hearty clam chowder like Boudin Bakery, the sole reason why that area of the wharf has the pleasant aroma of freshly baked sourdough. The enormous restaurant even has it’s own sourdough museum attached: an insightful, chronological look at San Francisco’s well-known baking history and a great reason to linger and bask in that addictive smell after a meal.

With The Yard a clear standout, decent guest rooms, and a perfect location, it’s not a tough choice shooting for Zephyr for those who want to stick near to the vibrancy of Fisherman’s Wharf. Value comes in spades here, making it a top pick for tourists wanting a hotel with a lively social scene and a playful approach to classic hospitality.

The average nightly price at Hotel Zephyr starts from $299 USD.

The writer stayed as a guest of Hotel Zephyr.