The QT Hotels & Resorts brand has now firmly established its own distinctive language, without coming across as formulaic. The quirky, off-kilter designs and high-concept luxury boutique approach has given the brand a unique way of interpreting and translating location, whether it’s bringing in just enough of Surfers Paradise to brighten the grand QT Gold Cost, aggressively mixing fashion and theatre at the sexy QT Sydney, or displaying a penchant for industrial-chic and sprawling rooftop bars with the resoundingly popular QT Melbourne. What they have doing has been working very well (they recently launched into New Zealand with Queenstown and Wellington properties), and that success doesn’t seem to be slowing anytime soon with the stunning QT Perth. 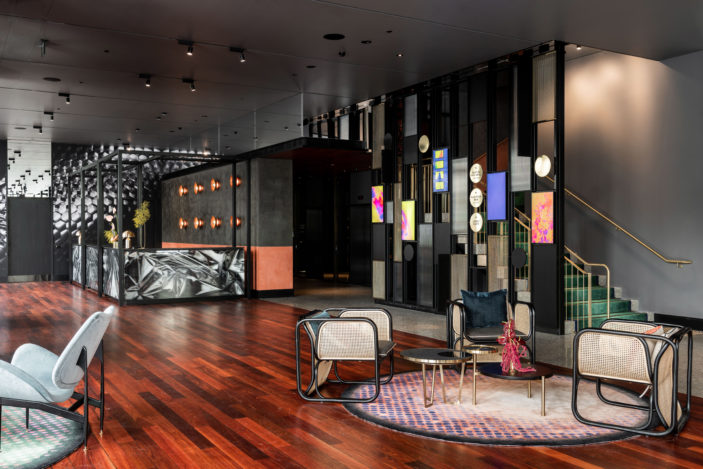 The famously detail orientated brand have taken their various tried-and-tested signatures and sucked up Western Australia’s diverse flora only to spit it out as a colour palate, alongside dabs of inspiration tracing the state’s coastline where desert and sea tangle in a dance of blue and gold. It’s an attractive concept to work with; straight through the giant copper and timber doors that welcome guests off the street, the wide-open lobby benefits greatly from the imaginative nods to WA, including a mini gallery of various flowers gleaming over bright, retro custom-made furniture. Designer Nic Graham, has surely put forth some of his best work for QT here, livening the stylish jarrah floorboards with opal toned rugs to reference the state’s mining boom over the vast red landscape, framed by local cacti to expand the scene’s theatrical sense of place.

The small European styled QT cafe is carved out in the far-end of the lobby, perfect for a coffee and pastry before guests go out to explore and take advantage of the super convenient heart-of-the-CBD location. At the gateway to Perth’s shopping district, as well as a quick skip on over to Perth station and new precinct, Yagan Square, QT’s location has a lot to offer. Hot tip: the nearby Short Order Burger Co., the Fremantle-born burger joint being one of the absolute best in the state.

You’re surrounded by top dining choices, but the hotel holds its own with Santini Grill. The Mediterranean restaurant, with a large Italian bias, is directed by renowned chef Robert Marchetti who is perhaps best known for his part in the legend of Sydney’s Icebergs Dining Room & Bar as well as various international ventures, next of which is a New York expansion for Swillhouse Group (who are behind some of the Aussie East Coast’s best bars and restaurants, including Hubert). While Marchetti oversees it, Exec. chef Nic Wood leads the kitchen in producing some seriously delicious dishes ranging from fresh pasta and large woodfired pizza to top-quality seafood and steaks dry-aged in-house for up to 45 days.

Lunch and dinner in this gorgeous space, awash with a sightly contrast of terracotta blues and earthy reds, is a must. Seafood is especially valuable here, the pastas are some of the best I’ve had in the city, and tiramisu is made in a massive bowl with waiters carrying it around ready to scoop you up a slice. Breakfast is much of the same: strictly a la carte with a focus on showcasing fresh local produce and classic dishes like buckwheat strawberry pancakes, clay baked eggs, and sides like crisp blood sausage and organic purple sauerkraut.

The restaurant’s chirpy influence darkens and spills out to the elegant Santini Bar on the same floor, offering up a separate menu and focusing on cocktails. Although it is understandably the least crowded of QT’s food and bev spaces, since the limelight is stolen by QT Rooftop. The brand have obviously learned a thing or two from the popularity of their Melbourne property’s crowning jewel, and so them bringing a similar concept for Perth makes complete sense. Especially when you consider that the city doesn’t really have all too many rooftop bars. This one is Perth’s highest, featuring a breezy outdoor area lined with much greenery, overlooking the city with vast and exciting views. You’ll be battling with locals for the best seats, but there is more than enough room throughout the bar, with views pulled in through large windows all around, illuminating a glamorous bar.

All 184 rooms have been curated with a sophisticated touch by QT go-to Shelley Indyk who has approached the brief with an impeccable dedication to narrative, continuing Graham’s ode to the Western Australian landscape with a colourful display of gold, purple and red set against greys and blacks. My Executive King room’s perky aesthetic is opulent industrial-chic without the pastiche, from the saturated violet velvet bedhead above one of QT’s exceedingly comfortable signature dream beds, to the sightly jarrah floorboards, to the large black marble en-suite bathroom with a dazzling double rain shower (some other rooms come with a deep tub and separate rain shower).

Room amenities include a high-end Bluetooth speaker from the notoriously pricey Bang and Olufsen, De Longhi coffee machine, and a densely packed mini bar full of local goodies and the usual QT quirks, sitting nearby a floating flat screen with free movies, affixed to an arm that can be swivelled for the perfect viewing angle. A small lounge area looks dramatic with its colourful furniture, perfectly placed between the bed and the bathroom. At a generous 40sqm, this is a room that flows with the vitality of QT’s major throughline of whimsical glamour. And, dare I say, it’s the finest iteration of the QT brand to date (granted, I am yet to experience any of their New Zealand properties).

This is also the first QT with meeting rooms, of which there are several all located on the second floor. The rooms also shoot off the same hallway as the hotel’s gym, which is located at the very end and, while nicely equipped, feels oddly placed and could be awkward for guests darting back and forth if those meeting rooms are teeming with corporate events.

Is this QT’s best hotel yet? It very well may be, and it seems the beloved chain is only becoming better at using their distinctive frame to create property’s that are incredibly vivid and locally minded. If you’ve got a trip to Perth coming up, a night or two at the QT is highly recommended.

The average nightly rate at QT Perth starts from $220 AUD.

The writer stayed as a guest of QT Perth.