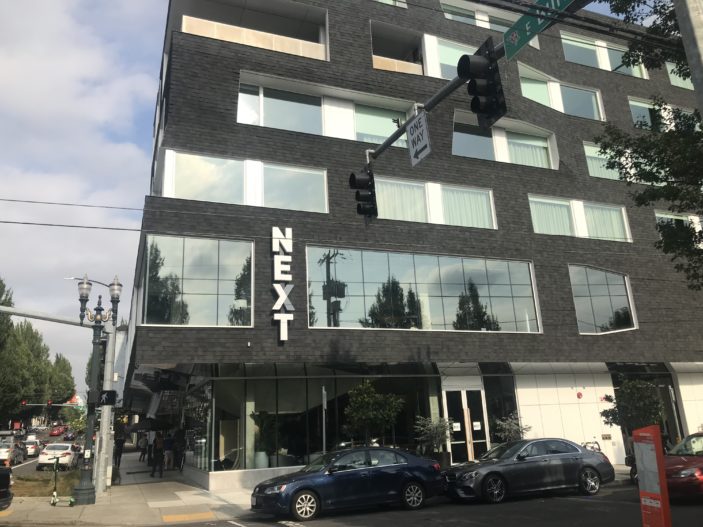 One of the most iconic hotels in Portland is the Jupiter Hotel, a refitted motel designed for hip, creative guests – the sort who might be attending a show at the equally iconic Doug Fir Lounge, a music venue that sits underneath the accommodation. In June 2018, some 14 years after it opened, the hotel expanded by opening the Jupiter NEXT, right next door.

In every way this is hotel modernising their brand, and giving guests a more contemporary option – while keeping you in the same great location in the Oregon city. But to really appreciate what they’ve got going on here, let’s take you straight into one of the rooms…

My room (“The XX”) was large with two very comfortable queen beds and a huge window overlooking the Eastside Lodge next door. There’s a massive Sceptre TV on the wall opposite the beds, and even though the room doesn’t have the same noise issues as the Jupiter does being on top of the Doug Fir Lounge – one of the city’s best music venues – they still give you ear plugs next to your bed. I didn’t get a condom this time though, something they’d left on my pillow when I stayed at their neighbouring location. 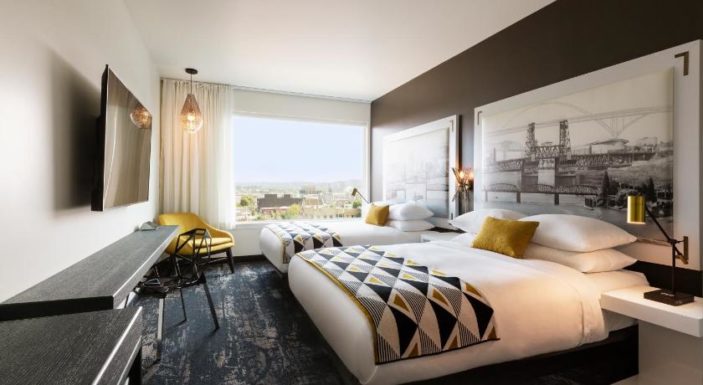 Unlike most hotel room designs, the bathroom is actually built into the room, with large iced windows separating the shower and the toilet from the room, while the sink and mirror sits in the main use area, with a fridge too.

There are small details like this that make this as unique a hotel as its originating neighbour. There’s a fresh air patio accessible on the floor, should you want to have a smoke, and you’ll find directions to the rooms written backwards on the wall in between the elevator so you can read it the right way around on a mirror that sits opposite. A clever, if quirky, design move.

There’s no coffee machine in the room, but mugs are supplied and you can head to the lobby for free coffee between 7 and 10am. Hey Love, the downstairs bar has happy hour between 2pm and 5pm, and beers that are as cheap as $2  all day. Their BBQ chicken wings were exquisite and $6 during happy hour, with some great $6 cocktails then too. My only complaint was that they wouldn’t let me charge to my room.

The room is a smart room, so you can turn things on and off via voice activated technologies. While Amazon’s Alexa has started popping up in some hotels, here they’re using the Roxy, and it works really well. It’s great to see a hotel room embrace new technologies like this, and it’s certainly setting the benchmark to what newly built boutique hotels should be doing. And of course there are plenty of USB and AC plugs to be found in the space too.

There’s so, so much to enjoy in this area of Portland it’s hard to know where to begin. You’re a 20 minute walk from the Moda Center, where you can watch a game of Basketball, or maybe see a great live show. Some of the best pizza in the city, Sizzle Pie, is a minute’s walk down the road and there’s fantastic ramen to be found everywhere (I recommend Afuri Ramen, which is a 15 minute walk away over the Burnside Bridge). Though the food on site at Hey Love is so good you don’t need to leave. The $12 breakfast burrito may be the largest breakfast burrito I’ve ever eaten, and the vanilla black iced tea is delicious. 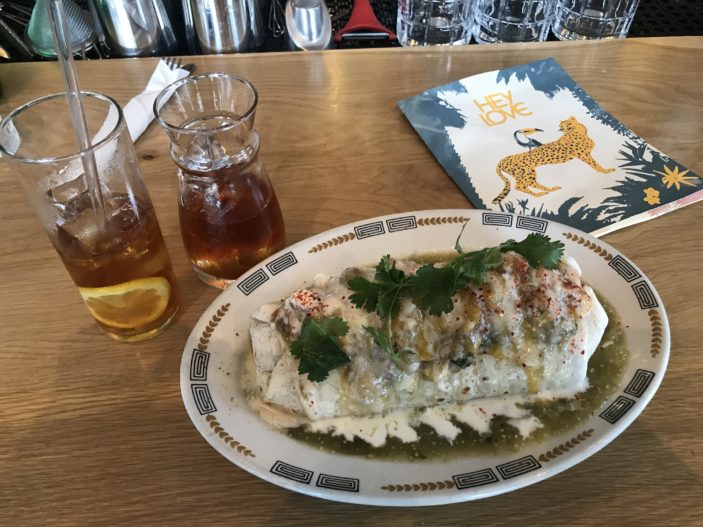 NEXT takes what makes the Jupiter Hotel great, but modernises it in a way that sets a benchmark for newly built boutique hotels. By building NEXT from the ground up, rather than repurposing existing rooms, they were able to create a space that did anything they could think of. And they did not squander the opportunity. I found myself enjoying drinks and food in the lobby bar and restaurant, Hey Love, during my entire stay, and couldn’t have been more comfortable in the room – which is smart in every respect. It’s clever and unique in its design, while giving you everything you could possibly need from a hotel room. And did I mention how great the location is?

Jupiter NEXT is located at 910 East Burnside Street, Portland, OR, US, 97214. For more details about the hotel, and to book yourself a night at it, or the neighbouring Jupiter Hotel, head to https://jupiterhotel.com/.

The author stayed as a guest of the hotel for two nights, with the support of Travel Portland. Photos by the author except for the photo of the room, which was supplied.