On the Western edge of Perth’s densely packed CBD, opposite the vibrant piazza of Kings Square, and a short walk from the nightclub lined streets of Northbridge and Perth’s busy RAC Arena, stands the modest Peppers Kings Square. It’s a hotel that boasts an enviable, dynamic location and has a lot to offer guests and those that want to spoil themselves in the city for a quick weekend away.

The reasonable price tag certainly helps up the value as well, especially for a city where hotels can charge exorbitant rates and still enjoy full occupancy at all times thanks to Perth’s position as a busy gateway for international business travellers. This leaves more money to splash on nearby staples, like the many eateries of breezy Shafto Lane or the luxury boutiques and restaurants that line European-styled King Street. Old Faithful Bar & BBQ is a top pick here, and it’s not even a few minutes walk from the hotel. You’re also walking distance from Perth station, so a quick journey down to historic Fremantle or the laid-back Cottesloe beach is perfectly viable even for those with a small amount of free time. 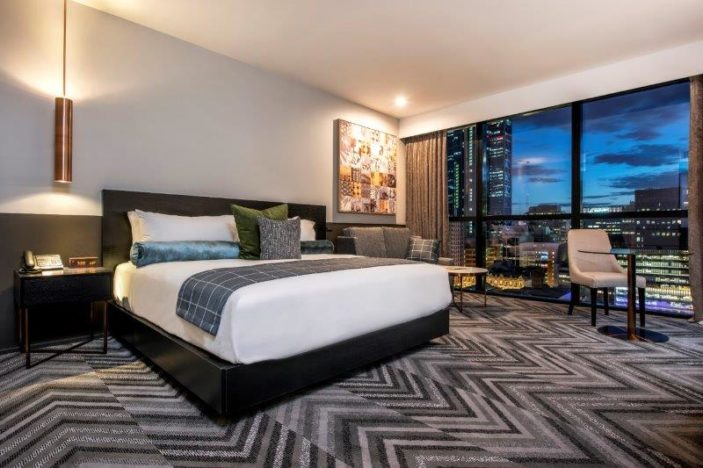 Entry to the hotel is off Wellington Street, opening up into a modest but modern reception area that bleeds into the casual 40-seater Stage Bar & Kitchen, prized for its a la carte breakfast and well-priced dinner which includes dishes like the Crispy 5 Cheeses Ravioli; Pain Fried Western Australian Snapper with soba noodle, lemon gel, asparagus, and sea grapes; and Self-Saucing Chocolate Pudding with honeycomb and spring berry reduction. It also doubles as a nice place to just sit and chill, which is probably why I see so many diners lounges after lunch time as I dart back and forth between the CBD and my room.

While longer term guests may be left wanting for typical hotel amenities like a gym or pool, Peppers atone with spacious, well-appointed rooms, of which there are 120 with only two categories. Though it could use a bit more personality, my Peppers King Room is immaculately clean and offers enough space (30sqm) to make full use of the building’s modular design. Plenty of natural light beams in during the day, and the in-house movies are appreciated after a long night in Northbridge. The bathroom is along similar lines: plain, but functional and comfortable. A rain shower certainly helps, and provided robes are plush and very warm.

The first floor Guest Lounge is the hotel’s big hit when it comes to public spaces. Although the narrow lobby restaurant mentioned above is a welcome space for guests, this light-filled and cosy area is perfect for those who want to keep their working and sleeping lives separate. I see many guests working away on their laptops here (the free Wi-Fi is strong and lightning fast), coffee in hand, bathed in the sunlight as if they were sitting in a park. Although some of those could have been locals, since I’m told the space is open to everyone.

With a lot of activity surrounding the hotel, Peppers King Square is in a good position to remain one of the most valuable mid-range hotels in Perth’s CBD. Plenty of value can be found in its beating heart of a location, and for those of all ages too since just as many younger people would be attracted to this based on price, proximity to Northbridge, and access to Perth station.

The writer stayed as a guest of Peppers King Square.