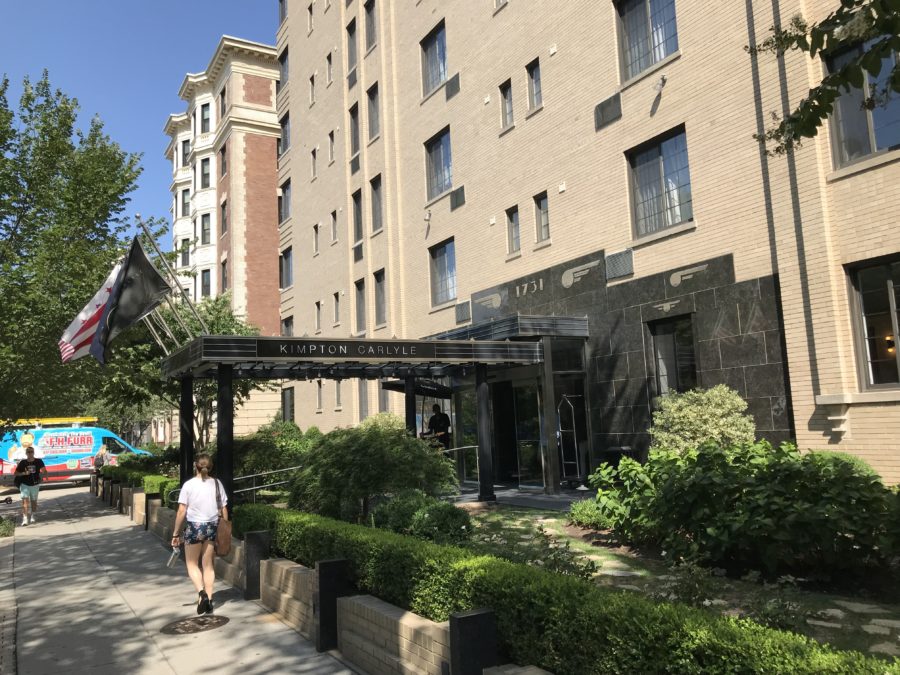 Set in a residential area and surrounded by quite a few Embassies, the Kimpton Carlyle Hotel Dupont Circle sits in an old 8 story building, with the sort of entryway that feels as much as “Old New York” as it does blend into its surrounds. The architectural influence of cities like New York and Philadelphia on the city is hard to ignore anywhere you go in DC; Dupont Circle being no exception.

The hotel enjoyed its last round of major refurbishments in 2015, and so while its exterior may fool you – and the art deco style is amplified to do just that – it is a hotel that feels very new. And it’s one that caters to the modern needs of its guests. Case and point – some doggy treats are left by its door with an important reminder that all dogs are good dogs. Indeed, this is a pet friendly hotel, with select rooms offering beds for pets and water bowls. I’m guessing the names of dogs on the sign are the current pets in residence. It’s little touches like this that make can a hotel experience a memorable one. 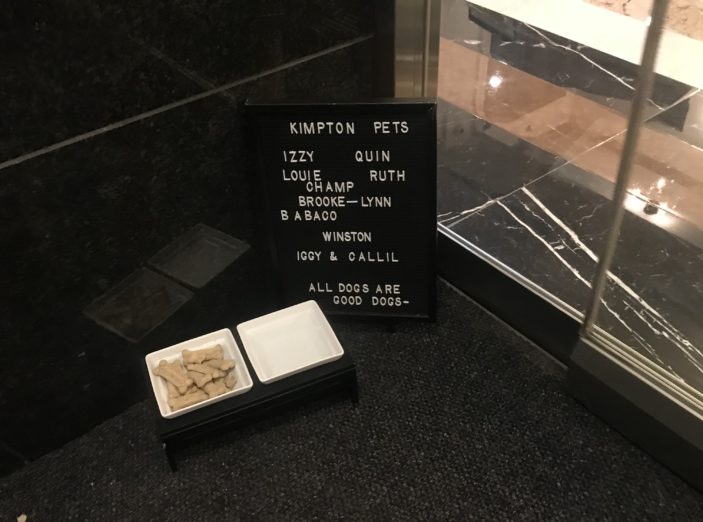 The room – a Deluxe King Room with City View – is cosy with a firm and very comfortable king bed, with pillow-top mattresses and what they tell me are Italian bed linens (I’m sure some people out there can tell the difference, but all I can say is I enjoyed their comfort). The pillows are particularly great too, and a thin robe is available for your enjoyment. USB and AC plugs are built into the lighting fixtures on each side of the bed. 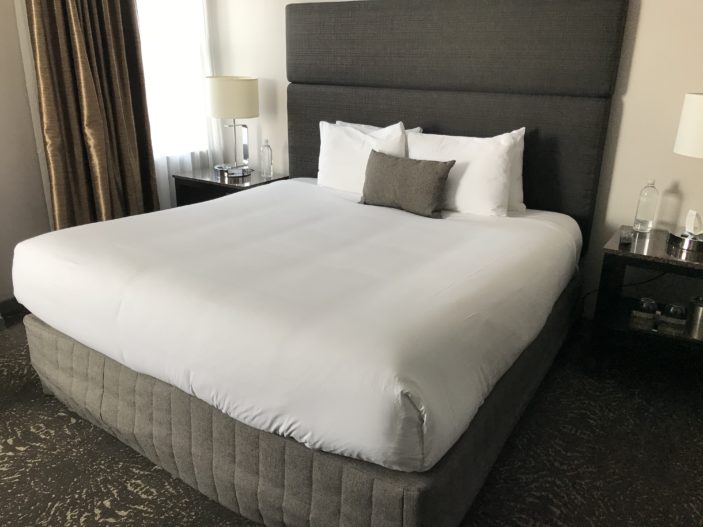 A large flat screen TV sits on a wall to the left of the bed, with the ability to swivel it off the wall for a better viewing angle. It’s a good use of the space, though seems like a surprising position for it at first. A desk and mini-fridge are below it, as well as the typical mini-bar snacks available for purchase. 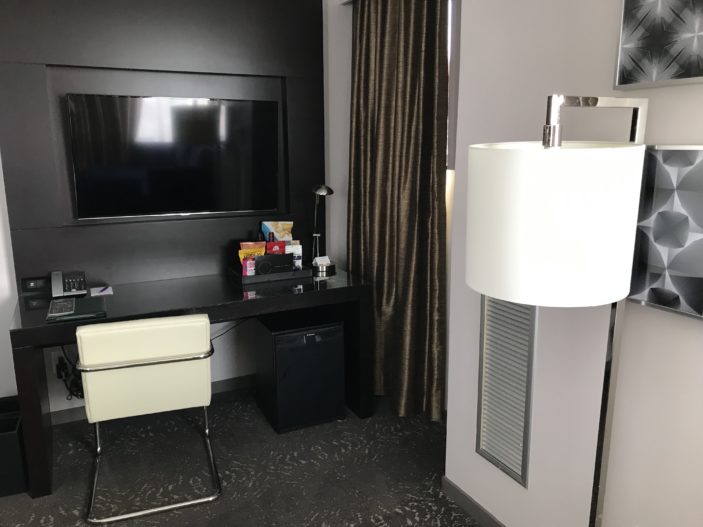 A great view of the city with the Washington monument visible in the distance, with a comfortable blue couch sitting against the window; the only item in the room which sits against the overall black, white and grey colour scheme. 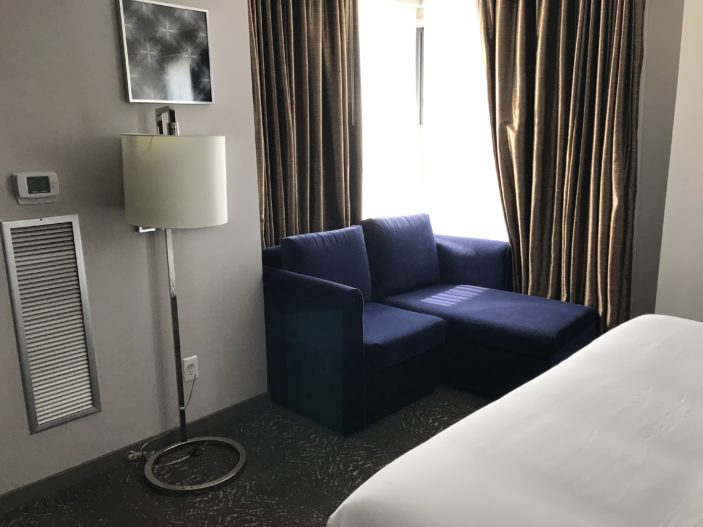 In the bathroom, you’ll find marble fixtures and a large walk in shower, with Atlier Bloem toiletries. It’s a pretty tight space, built for one, but has everything you could possible need in its walls. And the water pressure of the shower is fantastic – which being on the top floor isn’t always a given. 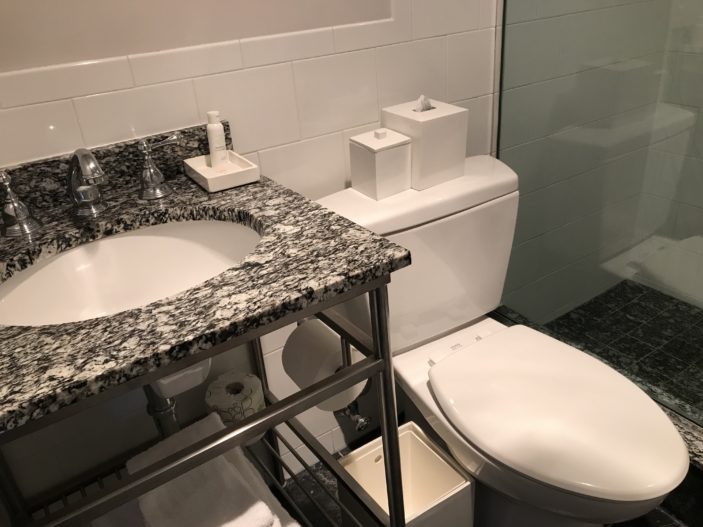 Design wise, there’s a great consistency that runs through the entire hotel. The black and white colour scheme with marble floors in the bathroom against white walls; a dark blue couch in the corner of the room, and a white bed. The curtains are golden, and even the artwork in the bedroom is a white, black and gray mesh. This reflects an Art Deco theme that you see from the outside awning, and the lobby – even the on site bar and restaurant (celebrity chef Michael Schlow’s The Riggsby, which seats 153), whose door is a keyhole, feels stemmed from the era. It’s unsurprising when you consider the age of the building itself, and I’d have to imagine it’s a mix of well developed and existing design aspects that combine for the hotel’s authentic art deco style.

The hotel also has a gym and no less than three function spaces, including the recently renovated Taylor Room, which fits up to 200 guests. There’s also the Horn and the Ellington. Wi-Fi is free and fast – as long as you’re a reward member, which is free to join. 56 of the 198 rooms also feature a kitchenette – and select rooms offer city views and pull-out sofas. The Riggsby do room service, and you can get complimentary coffee in the lobby, as well as enjoy evening wine receptions.

Getting to the Hotel

You’re about an 8 minute walk from Dupont Circle, which in addition to being home to one of the city’s most famous fountains, is also a stop on the city’s Metro line, with connections to the local DCA airport. It costs $2.55 to get to Dupont Circle from the airport, plus a $2 charge for a new Metro card (so hang onto it for your whole trip – and the next one too!).

If you fly into the larger IAD airport in Virginia, you’re in for a much longer commute, as there’s no train out there yet (though this is looking to finally open next year on the Silver Line, after half a century of demands), so you’ll want to drive or get an Uber to/from that airport. It’s worth mentioning that the IAD Terminal is a blast from the past as well…

Now here’s where things get interesting. While you’re a few kilometres away from places like The White House and the National Mall, you are less than ten minutes walk away from some of the most popular places for the locals to hang out and eat – most notably the Adams Morgan and U Street districts. Around U Street you’ll find the legendary 9:30 Club (815 V St NW) for live music, get yourself a meal so famous they named part of the street after it (Ben’s Chili Bowl, see the sign at U at 13th St). Though my personal favourite spot is Oohh’s & Aahh’s (1005 U St NW) for some legendary soul food – fried chicken, mac and cheese and collard greens.

And Dupont Circle itself has some great treats too. A recommended spot for a meal is Pisco y Nazca (1823 L St NW), a ceviche gastrobar which provides a modern take on traditional Peruvian cuisine. I recommended the Chaufa fried rice (with shrimp and calamari), and the Lomo Saltado Sandwich, with a mouthwatering beef tenderloin marinated in oyster and soy sauce. But it’s the ceviches which have made the restaurant a staple of the DC culinary scene and you can’t go wrong with any of them. I enjoyed the Callejero with a mountain of seafood and crispy plantains.

Also a 10 minute walk away from the hotel is The Phillips Collection (1600 21st St NW). Founded in 1921, it calls itself “America’s first museum of modern art”, and has a stunning exhibition right now, until 22 September 2019, The Warmth of Other Suns: Stories of Global Displacement. A timely exhibition about immigration, featuring works from the last 100 years, and a focus in contemporary conversation. Collectively a reminder that we’re not getting much better in dealing with humanitarian crises. The permanent exhibition has Braque, Francis Bacon, Van Gogh, Renoir, Mondrian and more scattered throughout, including some exhibitions of its own.

There’s little not to love about this hotel. The location is fantastic, and they have done a beautiful job of maintaining and enhancing the art deco qualities of the hotel. Everything from the art in the hallways to the colours of the wallpaper and bedsheets have been done artfully, while always ensuring the guest’s comfort is front of centre of any decision. And in terms of what the hotel offers, it ticks every box – from decent charging stations in the room, to a good shower and a fantastic bed. Definitely consider this hotel the next time you’re in Washington D.C.

The Kimpton Carlyle Hotel is located at 1731 New Hampshire Ave NW, Washington, DC 20009. To book a night at the hotel, head to their official website. For more information about what to do in the U.S. capital, head to washington.org.

The author stayed as a guest of the hotel and Destination DC for two nights in August 2019. The author flew to Washington D.C. with Delta Air Lines, with the support of Brand USA.