Around the world, Hotel Indigo is renowned for its ability to shape its design, architecture, style and even offerings around the city it’s built. But few do it better than the Katong Singapore location.

This spot is one of the newer in the international chain’s catalogue, having opened in 2016 – and it’s fair to say that it still feels brand new. But its design embraces the past, incorporating the Peranakan heritage of Joo Chiat, the surrounding Katong neighbourhood; the first Heritage Town of Singapore, which sits on reclaimed land. The complex even utilises an old police station built in the 1920s, that is now their on-site dining option, Baba Chews Bar & Eatery.

There was a notably beautiful smell to the building as I entered, with a vertical garden suspending the recently built structure, and a clearly strong intent on creating one of most unique designs of any hotel you’ll find in the Lion City. There was so much attention to detail in every corner of the building; the vertical garden itself representing the garden that a traditional Peranakan home would have on entry, making use of the small space they’d have available to them. 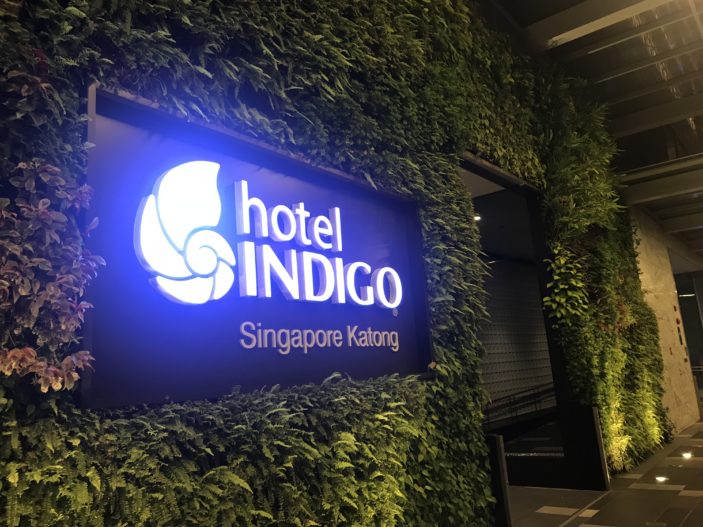 Peranakan itself is an Indonesian/Malay word meaning “local born”, in this case referring to the descendants of the early Chinese migrants who settled around these areas. They adopted a unique style to their architecture and their way of life, all of which is embraced here at the Hotel Indigo – be it the colours used, or the layout adopted. In the rooms, you’ll find the washrooms as a central feature in the bedroom, just like in a home. The mosaic art tiles that are found in the houses of the area sit behind the front counter and on a wall outside as you enter the building, all interpreting the Peranakan design for a new purpose.

In the Pavilion between the lobby and Baba Chews, you’ll also find a traditional 1960s “Mama Stall” where they sell their retail goods, books and merchandise promoting local craftsman. Lanterns lights sits as a chandelier above the colourful room, inspired by hanging dumplings. You’ll also find the hotel’s business working area in here too. 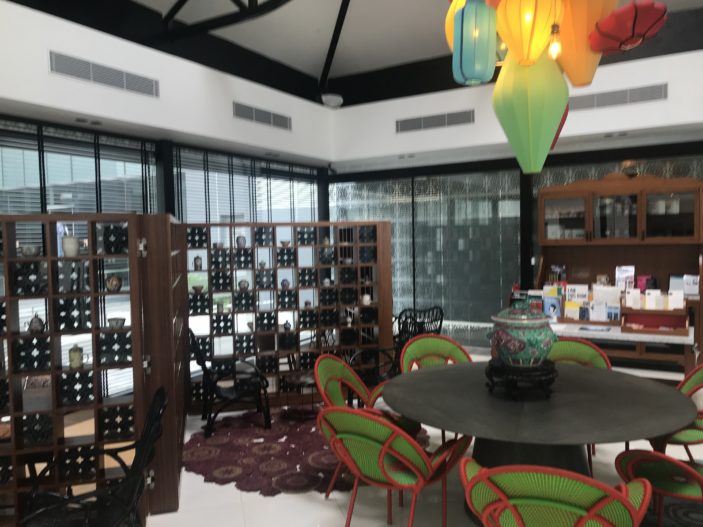 Back at the front desk, we were greeted by aforementioned great smells, high ceilings and friendly staff who offered us an Iced Latte on arrival. We were told of the infinity swimming pool and gym on the roof, which gives you a unique birds eye view – not of the modern Singapore that it so often flashed on our screens, but the residential area; the area of Katong free from the usual array of high rise structures, and home to the locals which have made this city the place it is. On Sundays, the area next to the pool is used for yoga, which they offer to in house guests for SG$20 and to locals and non-hotel guests for SG$30. And those looking for a function room will find it on the 7th floor. 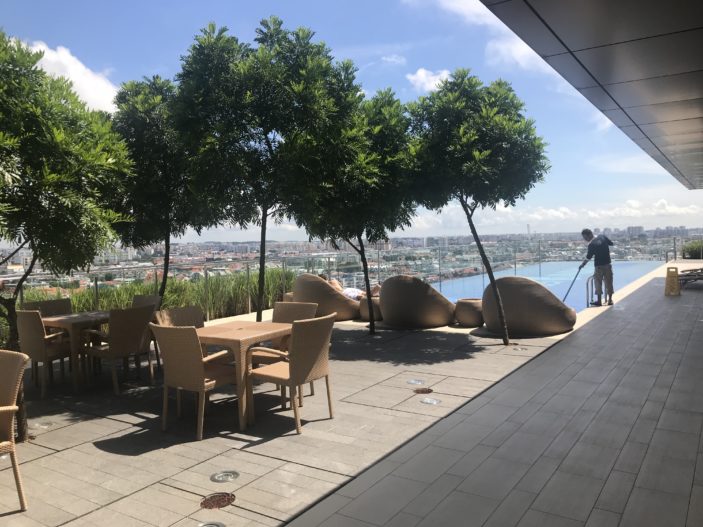 The view from the roof was matched only by the view from our room; with massive windows overlooking the surrounding area, and a sticker on said window (which was in the open plan bathroom area), reminding you that people could see into the hotel. So maybe avoid being too naked while gazing out the window. Luckily there were comfortable robes to enjoy while standing there. The shower was pretty wonderful, as well, and thankfully the shutters were easy to adjust so you could still get a a bit of a view while you enjoyed your hot shower. 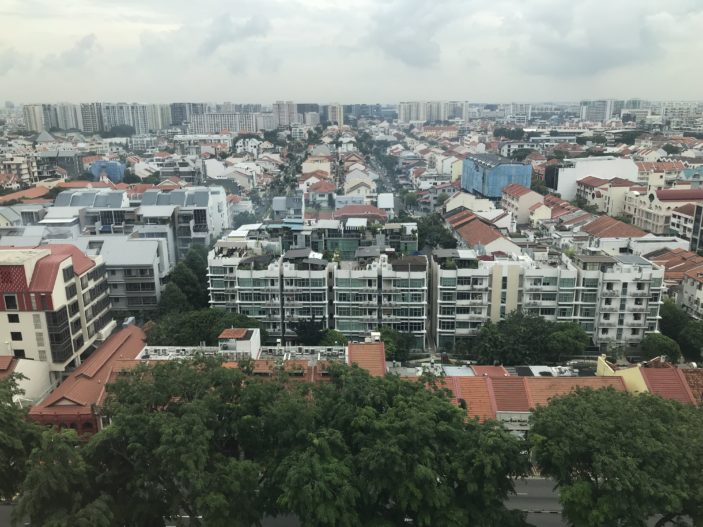 There were a lot of added treats to be found throughout the room, including a beautiful and colourful foot bath, with soothing foot balm and exfoliating foot scrub provided, alongside balancing bath soak from Biology; a nice touch if there ever was one. You can see it sitting in the back corner of the photo below, next to a chair designed to make the experience all the more pleasureable. 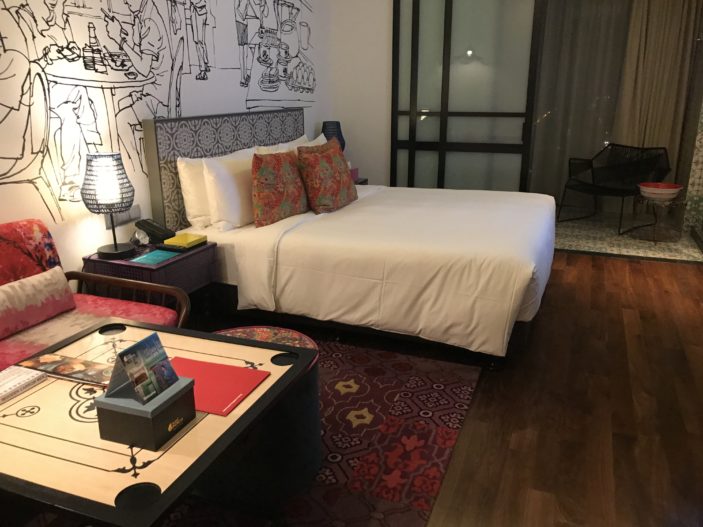 The walls featured drawings inspired by the local area, sitting behind a comfortable bed and its frame that embraced the mosaics; a beautiful red couch; and a Wooden Carrom Men set (a game popular in the area) which doubled as a table. Across from this area was a traditional cupboard with a mountain of literal treats to enjoy and purchase. There are 131 rooms in the property of various sizes, though the design runs through them all. 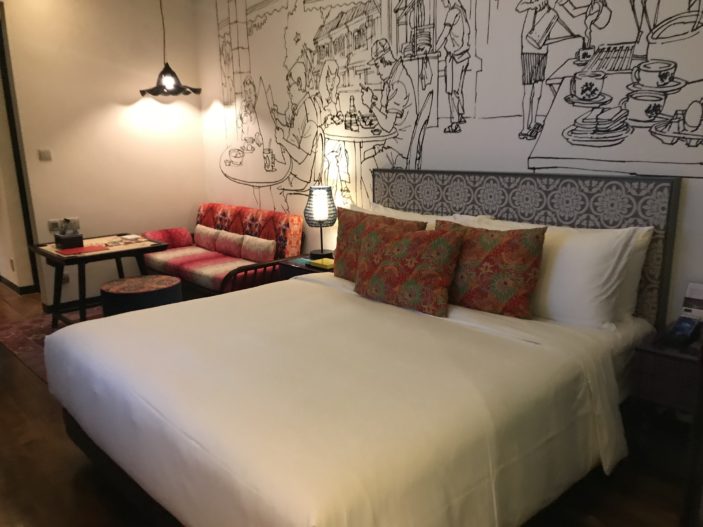 Though steeped in tradition, the room is far from devoid of modern convenience. A large Samsung TV sat on the wall, with 25 channels and a Samsung sound bar underneath it, all accessible from the one remote. There was also a “Handy” travel buddy takeaway mobile phone that you could use to make free local calls, and even take it around the local area to grab Google Maps. And you’re going to need it – this isn’t an area that is accessible via the train, so you’re going to be walking around quite a bit, or jumping in taxis – which is recommended in this city as they’re incredibly affordable.

Next door to the hotel is the shopping centre 112 Katong, with a Tim Ho Wan for dumplings, and a Toast Box for Kaya toast and more. As you walk around the surrounds, you realise how well the room has done at replicating its surrounds. The hallmarks of the Hotel Indigo design can be found in every nook and cranny of the area. And if there’s one thing that Katong is famous for, it’s its laksa – and some of the best laksa can be found at Katong 328, which is a short walk away. Roxy is another that was recommended to me in the area.

Other recommendations for the area include Eng’s noodles, a nearby wanton noodle spot, and across the road on the left side, Sin Hoi Sai Eating House is open until 4am, and there’s a chicken rice place next to it too that’s also open late. So you don’t have to go far for late night dining; which is one of the wonderful things about this city.

Dining at the Hotel 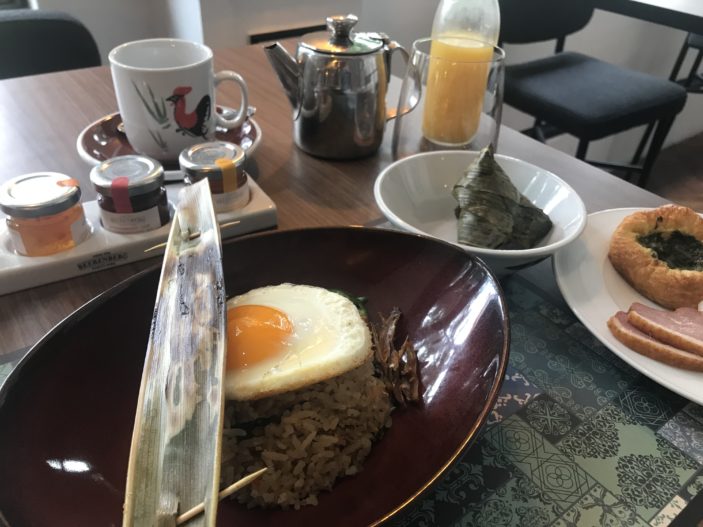 But dining at the hotel comes recommended, and you’ll find an impressive breakfast buffet at Baba Chews Bar and Eatery, which extends upon the design of the room, and the hotel. There’s a buffet, and you can order the rest of the dishes from a menu. There were three Asian specials (they change daily) so we shared pork dumplings and the nasi goreng on day one. On our second day at breakfast, they had a watermelon beetroot juice and three different “Asian” selections including wonton mee, gyoza and fried glutinous rice. So we had it all. The portions are small to encourage sharing. 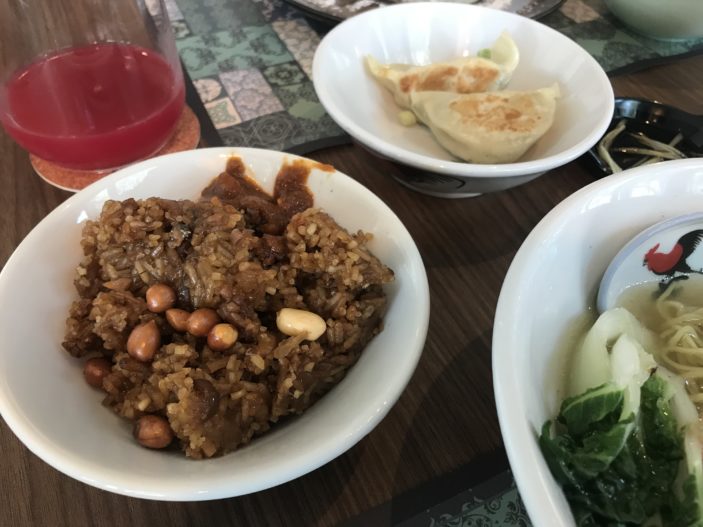 But there are plenty of more traditional Western breakfast dishes too, from Belgium waffles to pancakes and three egg omelettes. But you didn’t come all this way to not eat like a local did you? The buffet was an interesting mix of Dim Sum, pastries including things like a cheese and spinach croissant, cheeses, smoked meats – including duck and tuna – plus fruits, cereals, juices and yogurts for one. There were breads of course, too, with self serve Kaya and plenty of other spreads. You may notice in one of the pictures above, too, that there was beautiful design in some of the mugs, too – which are available for purchase at the hotel. 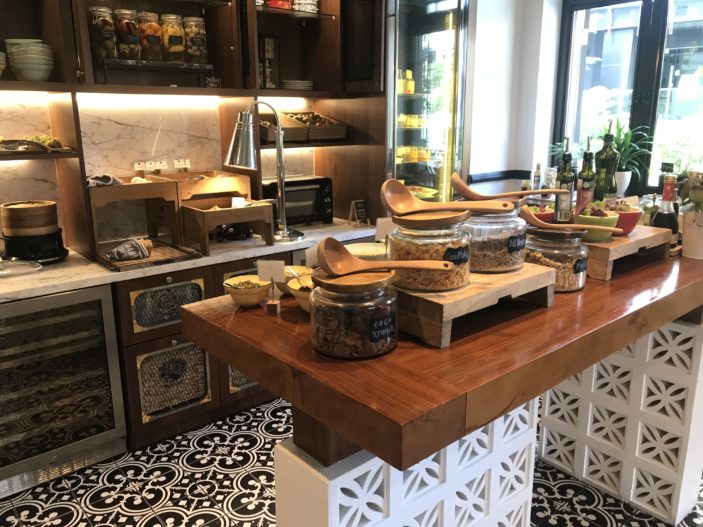 The food was so good that the hotel kindly invited us back for lunch, during which they were doing a seafood “Katong’s freshest catch” promotion. So we had some lobster served over cheesy noodles (because of course). It was real good. 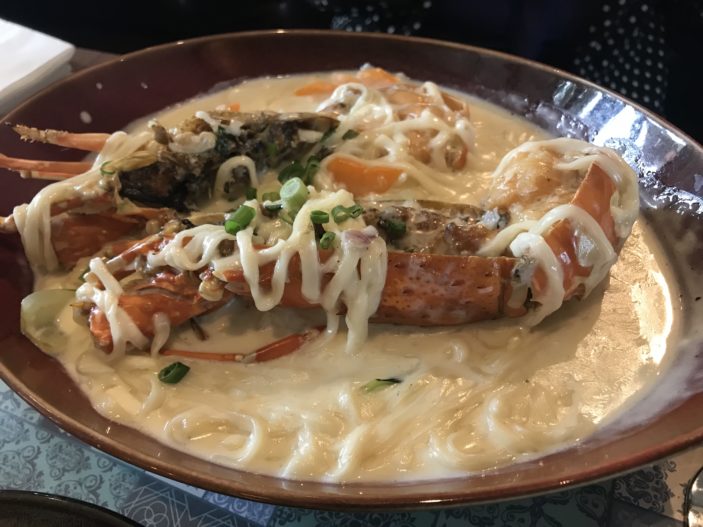 Alongside this were some set lunch menus, and for the affordably price of SG$15.90 you enjoyed a starter, a main and vegetables. The menu was unsurprisingly Peranakan cuisine focused, with dishes like Ngoh Hiang (pork and prawn roll wraped in beancurd and fried), Otah Otah (traditional mackerel fish mousse), Chicken Satay or fried beancurd. For mains there were dishes like Ayam Curry Kapitan (a dry chicken curry flavoured with lemongrass, salted fish and kaffir lime leaves), Udang Masak Sambal (stir fried sambal prawns) and Ikan Goreng Nonya (deep fried fish). All accompanied by Sambal Terung (fried eggplant) or Chye Boey (braised mustard greens with roasted porn and taramind dry chilli). Needless to say, it was pretty damn delicious and great value for a non-hawker dining option. 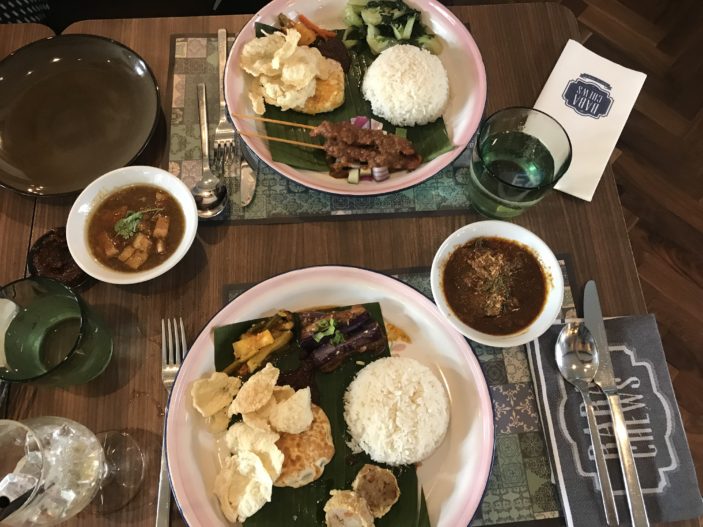 Hotel Indigo Katong Singapore is the perfect boutique hotel experience. The rooms may be steeped in history, but they offer all the modern luxuries you could ask for, including plenty of plugs and a very comfortable bed. The dining options on site and nearby are endless, and the infinity pool on the rooftop was beautiful. And most importantly, the hotel achieves one of the most difficult tasks for a constant traveler – an original experience.

The only thing that may not work for some guests is the location – but the whole point is to get out of the tourist centres and enjoy an experience that embraces the real local Singapore. And for the richness of that experience alone, a stay at the Hotel Indigo is worth your time, and this makes it the best hotel I’ve ever stayed in in the city. There’s just none like it.

The Hotel Indigo Katong Singapore is located at 86 E Coast Rd, Singapore. For bookings and more details, head HERE or search for them through Hotels Combined below.

The author stayed and dined as a guest of the hotel. We flew to Singapore with Scoot.