Glamping and Ghost Hunts: A night on Sydney’s Cockatoo Island 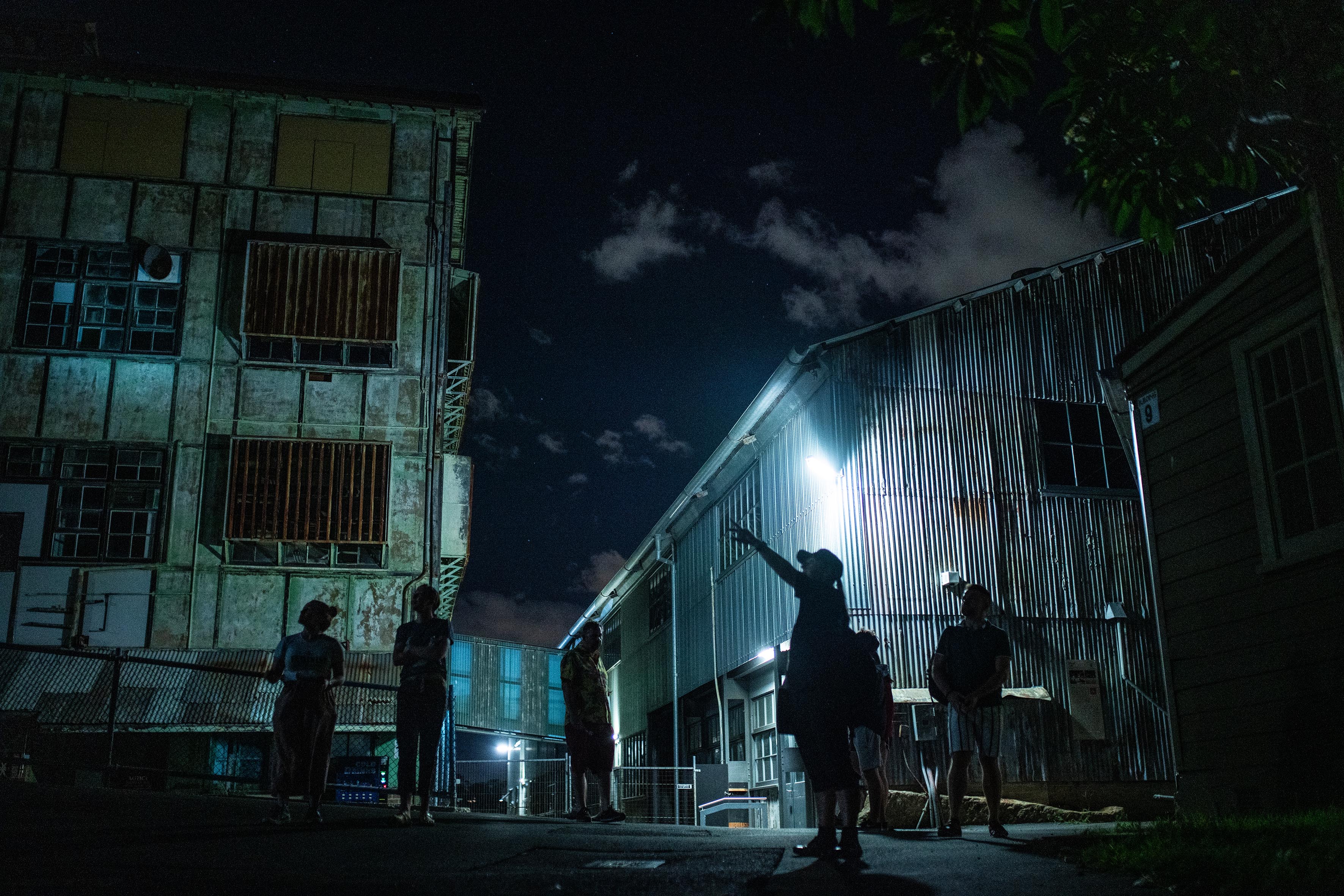 As you step on land, you may forget you’re still in Sydney. Cockatoo Island has always felt like a world away from the harbourside metropolis; yet this small island in the middle of the harbour, where you can glamp and hunt for ghosts, is just a short ferry ride from the picturesque buzz of Circular Quay.

The site of many an art festival, including the epicentre of Sydney’s Biennale, Cockatoo Island remains a mysterious, intriguing and yet a rather peaceful place that invites you to come and stay the night. If you dare.

Often forgotten, the island holds a significant, multifaceted history, operating over the years as a penal colony, convicts jail, reformatory girls home, and an industrial dockyard.

Now a UNESCO World Heritage Site, the island is a landscape of aged sandstone buildings, soaring rock formations and empty warehouses – an eery echo of the buzzing affairs that would have once occurred. It’s not until you learn about the unpleasant events that unfolded here that the dark and disturbing side of Cockatoo’s history is revealed.

So round up your mates, grab some sangas, bring your fearless can-do attitude, and head over to Cockatoo Island for a night of glamping and ghost hunting. Here’s what to expect. 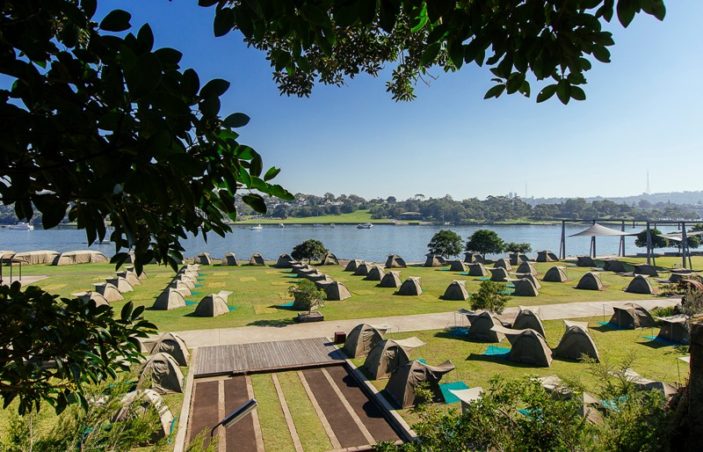 Sitting across a lawn, facing the sparkling water’s edge are rows of a few dozen green tents. If you’re staying the night on the island, choose from the Camping, Deluxe or Deluxe Waterfront Package. We went luxe and experienced the Deluxe waterfront package, and it was worth it. With the Deluxe Waterfront Package you are provided with a raised camp bed with linen, blankets and pillows, as well as a range of extra comforts like an esky, lantern, hot water bottle, towels and toiletries package. The special touch is when you wake up the next morning and you unzip your tent to the onlooking view of spectacular pastel colours of the harbour waters and sky.

There is a communal outdoor kitchen and dining area for when you want to flame up the barbeque (and fight for one of the power sockets to charge your phone), as well as a large toilet/shower area. It may be somewhat reminiscent of childhood camping trips, but the facilities are pleasant, the glamping tents comfortable and the surrounding location rather beautiful, especially when the sun starts to set.

The next morning, take a stroll round to the other side of the island, where a cafe set up in a former shipyard serves quality coffee poured by friendly staff. 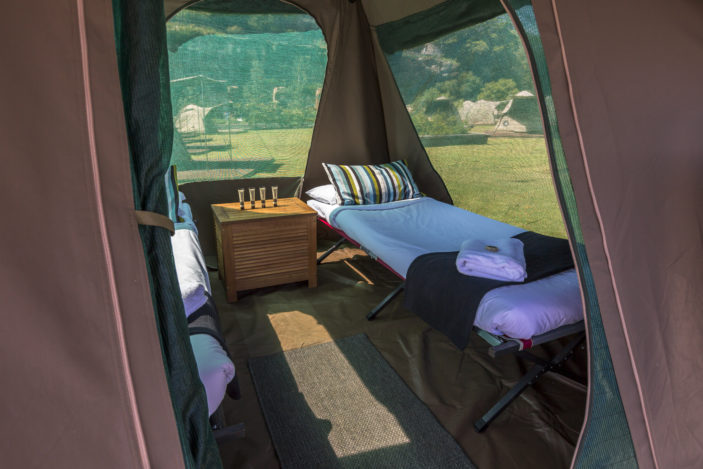 If you’re fascinated by the supernatural or curious about paranormal sightings, then the evening Ghostyard tour is not to be missed. A sceptic of ghosts, I admit I was intrigued about the uncanny stories that haunt the island, so while there is an option to go on an all-ages Haunted Histories tour, the former and more frightening exploration of Cockatoo Island was the undoubted choice.

As you’re guided inside dark spooky buildings and told stories of what unfolded within these walls not long ago, you’re transported to another time.

From 1871 and 1880, a part of the Island was a Biloela Reformatory School for Females, where supposedly delinquent and orphaned girls called home. From what was told by our compelling guide, life didn’t sound too good for these girls, with gruesome accounts of abuse and neglect, and awful insinuations from the fact that the other part of the island was occupied by male dockyard workers and labourers. 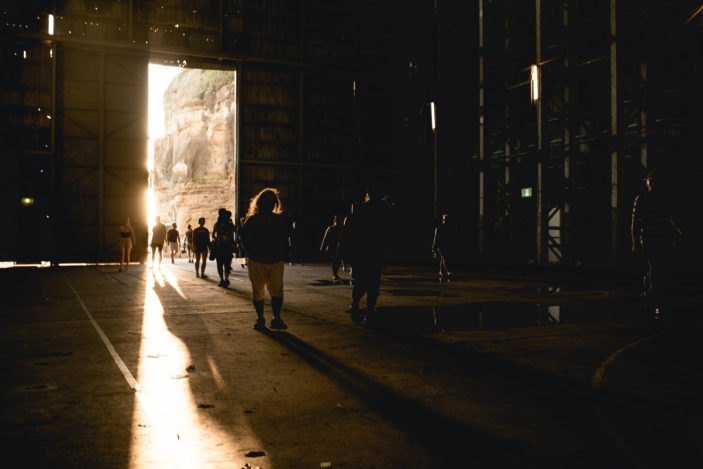 There are other chilling accounts of those once imprisoned, the mysterious deaths of dockworkers and a little girl named Minnie, as well as the shivering experiences of hearing strange sounds from rooms above and seeing shadows mysteriously appear and disappear. Perhaps it is just the mind fueling the imagination, or, the island really is as haunted as the say.

Whether you believe or deny supernatural existence, the tour is still a fantastic experience. Not just for a bit of frightful fun, but also for learning about the incredible history of a (sometimes) forgotten island in the middle of Sydney Harbour.

If you are ready to get your glamp on, the Cockatoo Island’s Deluxe Camping package starts at $130 a night or $150 a night for a waterfront tent. The ghostyard tour is $45 per person and runs from 9 – 11 pm on Saturday nights.

The writer was invited to stay as a guest of the Harbour Trust.