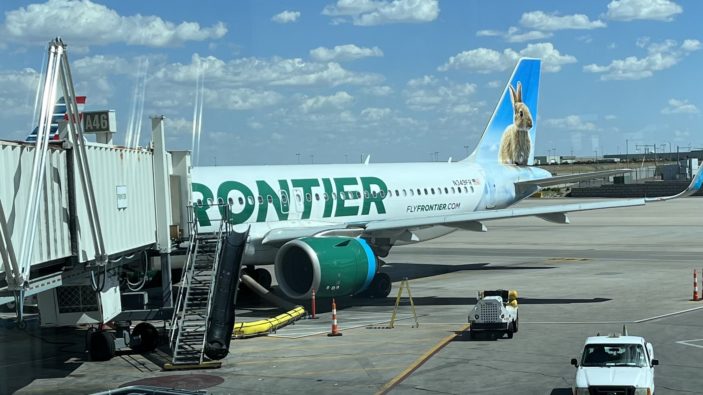 It’s understandable that most frequent travellers will instinctively shy away from “ultra low-cost carriers”. With limited service both in terms of the amount of daily flights, and the actual service they offer, they are generally far from the best, nor most reliable ways to travel.

But every so often, a deal is too good to pass up, or a route is too convenient. Both were the case when I flew Frontier Airlines for the first time last month, with a direct flight from their home base of Denver, to Washington D.C. (DCA).

The timing was perfect, the price affordable – but just how “ultra” was the “low-cost” experience?

These days, you’re either an airline that charges for carry ons, or you’re not. While this used to be something exclusive to low-cost carriers, nowadays it can be a surprise cost for any airline (I’m looking at you, Porter Airlines). But, if you’re an “ultra low cost carrier”, you can just about guarantee that it’s going to be an extra cost.

That doesn’t mean you can’t bring anything on board without paying extra, however. In short, if it won’t fit under the seat in front of you, it’s a paid extra.

Rather surprisingly, however – on my flight at least – a carry on bag (determined as anything larger than 14″H X 18″W X 8″D), actually cost more than checked luggage. We’re talking US$65 for carry on, or US$60 for checked luggage (with a low 40lb limit).

I appreciate an airline discouraging larger bags in the cabin – which seems to be the opposite of most airlines who see their customers bring on board the largest possible carry on to quickly fill up the bins – but it’s difficult to rationale the extra cost.

Still, a typical JanSport backpack will travel just fine for no extra cost, and on check in, they didn’t seem to care I had a smaller tote bag alongside it. It all just needs to fit under the seat in front of you.

Getting to Denver Airport couldn’t be easier thanks to the RTD train that runs directly to the terminal from the city. It takes 37 minutes from Union Station to the DEN airport. And it’s a comfortable airport to spend time in. And we did end up spending quite a bit of time in the airport, as after we had fully boarded the aircraft, we had to deplane due to inclement weather at the destination. We didn’t end up taking off until about three hours later.

The airline and its staff showed excellent foresight and initiative in making that call, rather than keeping everyone on board, and they were good to keep everyone in the terminal posted on the changes to the departure time. Though several passengers barely made it back to the flight, as we left earlier than we were originally told it was likely to be – so some had to return through security. I would never recommend doing that – no matter how long they say it’ll be, stay close to a monitor and listen out for updates.

In Flight Service and Experience

While staff were helpful with communication, both at the gate and on board, they were rather unhelpful on board. This seems to actually be a policy with the airline, as when an older woman asked for help with placing her bags in the overhead storage compartments, the stewardess replied “we don’t usually help with bags”, and walked away. I ended up helping her (hold your applause), and she was fine, but what a ridiculous policy.

After we finally took off, there was one round of service shortly after take off, with nothing complimentary – though they will give you a small cup of water if you ask for it. But a bottle will set you back $3.25 – so bring your own, and fill it up in the airport before you board. There are plenty of places to do that. They sell light snacks, soft drinks, tea, coffee and the usual assortment of alcohol.

The airline claim to be America’s “greenest”, and they certainly make sure the aircrafts are as fuel efficient as possible by removing anything that you might see as “extra”. There’s no power at the seats, no wi-fi available and no entertainment on board.

We were flying on an Airbus 320, with Hop the Bunny on its tail, in a 3-3 layout. I was lucky to get an aisle seat as I didn’t pay the extra for a seat reservation, and it was a full flight (well, originally – a few people missed the rescheduled service, or perhaps got themselves on another flight with another airline.

The aircraft, including toilets, was clean, and the seats uncomfortable with very average leg room – though I have certainly had worse. The seats had no recline, and the world’s smallest tray table – just large enough for a drink.

Coming in at just under three and a half hours, this flight was just that little bit too long. Not long enough to warrant it unbearable, mind you, but long enough that the discomfort started setting in.

For what it’s worth, this is absolutely the most authentic “ultra low-cost” experience I’ve had in the USA, with the experience similar to that of Ryanair or Easyjet in the UK/Europe. While they advertise themselves as such, and there shouldn’t be any surprises, the lack of help from staff and high cost of baggage remained disappointing nonetheless. The seats were uncomfortable enough to make me unlikely to travel the airline on that route again, though for routes under two hours, I would certainly consider it. For the right price, on the right route, the ultra low-cost experience is certainly one worth taking.

This flight was possible with the support of Visit Denver and Destination DC.