More people than ever are convinced things need to change, but we also really like meat.

We humans may be omnivores, but we really like meat. Some 86 percent of people surveyed by data-gatherer Statista say their diet includes meat. So, when you read articles about “strong trends toward veganism” or with provocative headlines such as “Will We All Be Vegans by 2030?” take them with a few shovels of salt. No, we won’t all be vegan by 2030, but yes, there is a trend – perhaps not all that ‘strong’ but a trend nonetheless – toward vegan and vegetarian diets.

Again, however, more salt must be added: this trend is primarily in rich western countries… particularly in western European countries. America and Canada are also slowly moving toward consuming less meat, but are still trailing places such as Germany where as many as 30 percent of people self-identify as “flexitarians,” a term for people actively trying to cut down on their meat intake. In the rest of the world, only India stands out as having a significant vegetarian population, mainly due to religious reasons. Even in places such as Taiwan (thought of as Buddhist but actually majority Taoist), and solidly Buddhist Thailand, the vast majority still eat meat, despite adhering to a faith that generally promotes vegetarianism… Some, however, do skip it during certain festivals or on certain days of the week.

But 2020 was a “breakout year for plant-based foods – in particular, plant-based meat,” according to Kyle Gaan, an analyst with the Good Food Institute.  The market for meat substitutes grew by 45 percent in 2020… an impressive figure.  In the later 2020s, the meat alternative industry could be worth close to US$10 billion but by the same time, the traditional meat industry will be bringing in over US$1 trillion annually. Despite this disparity in revenue, change is coming. Ask any Millennial or Generation Z person how they feel about meat consumption and you’ll probably get a conflicted answer. Most accept that the current way we raise and consume meat is hugely destructive and unsustainable. Plenty of people are willing to give “plant-based” meat a try, but any sort of “new meat” or “alt meat” as a complete replacement is a hard sell. Despite the slender minority of hardcore vegans who say they find meat ‘disgusting,’ the rest of us belong to a meat-loving species. How much do we love the planet to give up that kabab or two after a night of partying? If the substitutes are good enough to pass the “after-a-night-out-need-for-meat” test, however, we might have some real contenders

A huge number of celebrities are already on the vegan train. The list of the rich and famous who have given up meat and or all animal products includes singer Beyonce, tennis star Venus Williams, actors Woody Harrelson (whose example helped convert Liam Hemsworth), Natalie Portman, Benedict Cumberbatch, and Joaquin Phoenix, singers Billie Eilish and Ellie Goulding, race car driver-god Lewis Hamilton, and tattoo artist Kat Von D, to name just a few. But how many of your friends are veggie or vegan? Likely not too many. For many years, we’ve been offered mainly soy-based products as meat replacements. 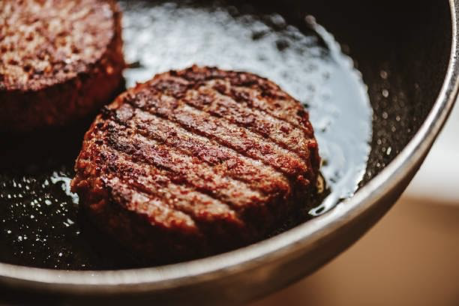 Soy milk is pretty darn good, but soy doesn’t deliver the rich tastes and textures found in meat, making many of the current alternatives more niche products rather than something that could actually evolve into a substitute for the unsustainable meat industry. We are, however, seeing some serious evolution in the technology of food, and in consumer choices. Could the 45 percent boom in alternative meat sales over 2020 be the result of the COVID 19 pandemic?  It almost certainly was  a factor. Spending a year or so in some form of lockdown, thinking daily about health issues is bound to make some folks reconsider their lifestyle choices – which includes everything from getting one’s posterior off the sofa on a regular basis to not chowing down on animal products at every meal.

In the end, things will have to change whether we like it or not. In America and most of the rest of the world, a massive portion of annual freshwater use goes to the huge amount of feed needed for raising cattle. Mind you, this is happening at the same time places such as California are experiencing record droughts. There may be climate change skeptics in the ranks of the older generations but younger people almost universally accept the science that is unfolding in front of our eyes.

Our planet is changing and we are not changing fast enough.  Experts discussing the crisis almost always cite the huge toll the meat industry takes on resources and how much it contributes to advancing climate change. Younger people understand these facts but they are human, so they very often enjoy eating meat. If someone can offer something that’s a step up from veggie burgers, there’s a good chance millions will go for it.