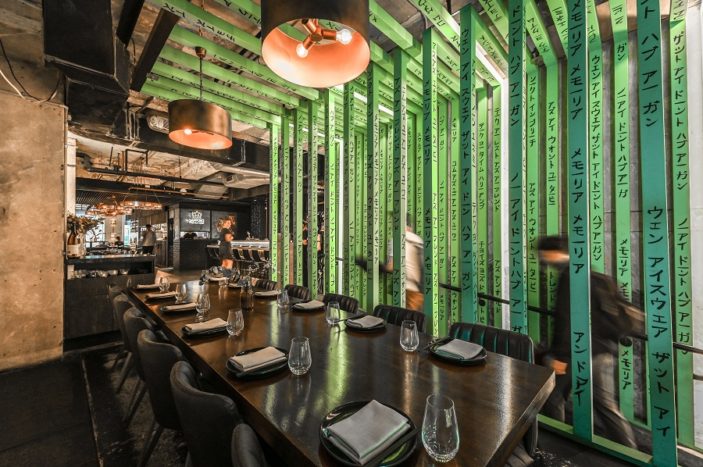 Kid Kyoto is like your trendy cousin. You envy their effortless style and try to imitate their endearing nature, but no matter how hard you attempt to recreate their swagger, it just isn’t right. These are my favourite types of dining experiences – the ones you genuinely can’t replicate at home. As I
walked Bridge Lane’s cobblestone laneway, the rain glistening against the “Kid Kyoto” neon blue sign, I knew the cool cousin effect was about to take over.

Upon entering, you’re immediately transported to the laneway bars of Tokyo. In fact, the only thing that reminded me that I was indeed in Australia was the noteworthy hospitality and the host sensing my need for a glass of Margaret River Chardonnay. As I sipped, I admired the bottles of sake adorning the bar and booths and quickly set to work perusing the menu to a melody of guitar riffs strumming against the venue’s exposed ceilings and polished concrete walls. 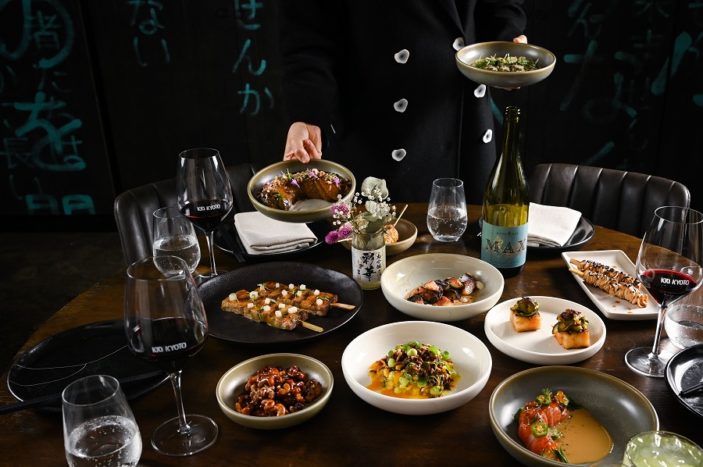 My eyes were immediately drawn to the takoyaki croquettes with octopus, katsuobushi and bulldog sauce ($16) which honoured the humble takoyaki stores you find in Osaka while giving it a crunchy, rebellious twist. Our host then guided us to an unlikely hero of the evening which can only be described as umami on steroids, the grilled daikon mochi with salted cucumber and chilli oil ($6 each). It’s an injustice to leave without ordering a double serving.

Save your classic cocktails for a more subdued venue and give as much TLC as you can to Kid Kyoto’s signature tipples. I sipped (read: inhaled) the Yama Yama ($16) containing sake, cucumber, yuzu and grapefruit. Let me tell you; if Kyoto’s Arashiyama Bamboo Grove was a cocktail, this would be it. Stunning, beautiful, gorgeous – Mother Nature in a glass.

Other notable mentions are dishes I’m told have been on the menu since inception (and aren’t going anywhere!) include the watermelon sashimi with tamari dressing, pickled ginger and wakame ($15), and the corn ribs with smoked chilli miso and togarashi ($15). Corn has never been a vegetable that
overly excites me, but that’s the beauty of the Kid Kyoto menu. It takes great local produce and injects lashings of eclectic Japanese fun. 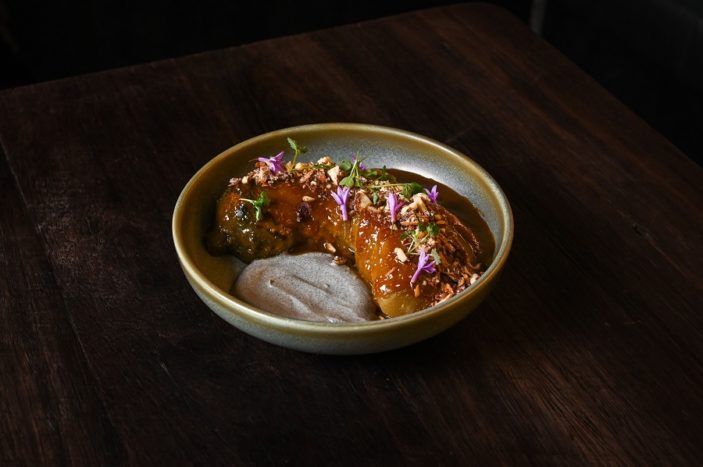 The king brown mushroom with truffle tare ($15) was rich, moreish and thankfully portion controlled to two heavenly skewers, allowing room to explore the mains. The steamed barramundi was drenched in koji, brown butter and wakame ($36), and my tastebuds get tingly just thinking about it (fingers were harmed in the fight for the last spoonful of brown butter and wakame sauce). The mains were rounded with a newcomer to the menu, the eggplant dengaku with smoked yoghurt and almond furikake ($20) which came out looking like a masterpiece, yet left me underwhelmed. The eggplant was dense and didn’t hold its own against the smoked yoghurt and almond furikake. I kept bracing for the flavour bomb to hit, but the target was sadly never located.

Overall, Kid Kyoto is one of those restaurants where you know each ingredient and flavour combo has been meticulously thought out.

As I said, it’s the cool cousin effect; consider me mesmerised.

Kid Kyoto is located at 17-19 Bridge St (entry via Bridge Ln) and is open Tuesday – Saturday from 12pm until late. Bookings are available online via kidkyoto.com.au

Naomi Rheinberger is a professional hotel stayer and skincare guinea pig who makes a living from talking and writing.