a’Mare, Crown Sydney Review: Golden-age service with a side of theatre 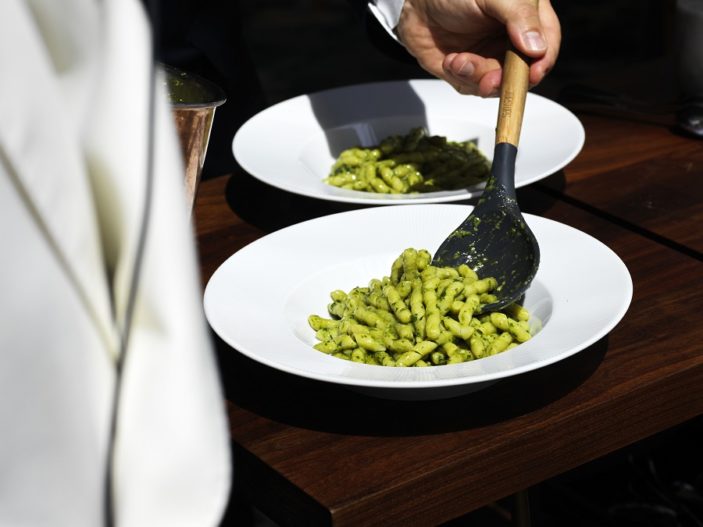 Alessandro Pavoni doesn’t have anything to prove. His Ormeggio at the Spit – old enough to be considered legendary – has always been a reference point for Sydney’s excellent spread of trattoria-inspired eateries. The Mosman restaurant’s more recent turn, skewing seafood and flirting with Puglia, has only solidified that reputation. But the chef is clearly not one to rest on his laurels. Though his name is already iron-clad, as far as Sydney’s gourmands are concerned, Pavoni is ambitious as he helms Crown Sydney’s big, sociable scene-stealer: a’Mare. 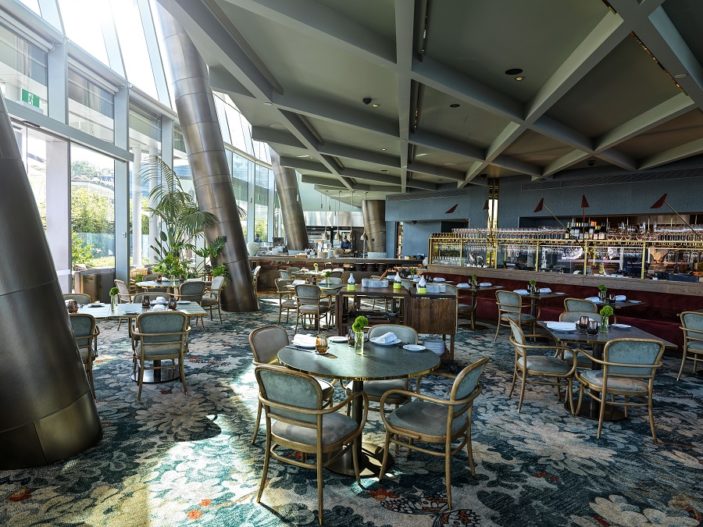 a’Mare (translation: “at sea”) is a romantic view of old-world Italy, stretching back beyond the 1950s and into an era when the country’s dining scene was more patient, less contemporary. This is a time when food prep really began to emerge as an art form unto itself; Pavoni has drawn on that idea to give a’Mare its defining quality: service. A lot of service.

Service so busy in fact that a single table of two could be crowded by three waiters at a time. Not a bad thing. While the palazzo-inspired floor is covered by a small army of staff in white tuxedos, it seems everyone here has been trained to be self-effacing – unobtrusive as they wait on each table with eagle-eyed enthusiasm.

This is helped by Michela Curetti’s smart interior planning. Prime tables are cradled in sharp angles, separated from others both by distance and by design. It’s intimacy without actually needing to book a private dining room; so close to the inharmonious noise of such a bustling space but distant enough that conversation can flow without interruption.

The Dubai-esque building’s lobby, leaning heavily on the visual pizzazz of an 8-metre, 396-blade crystal chandelier, is nice enough, but looks like it’s been inspired by a Western Sydney Westfield. Woodcut, the neighbouring street-level restaurant to a’Mare, is uninspiring. The Crown’s hallways are oddly narrow and largely bare. a’Mare, on the other hand, looks like it has staying power. It tastes like it too, for the most part. 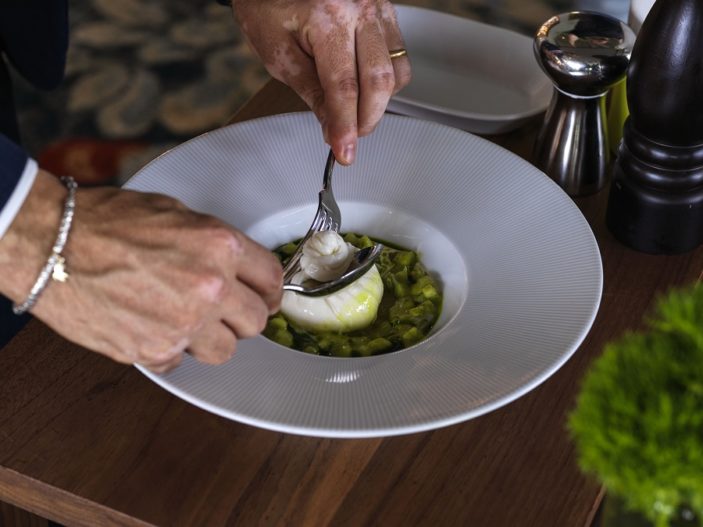 Plating here is more Machiavelli than Ormeggio, simply presented without the photo-worthy flourishes. That’s not to say you wouldn’t want to throw up some of that showmanship on the ‘gram. A tray with two neat columns of triangular brioche toasts sliding back to reveal a full caviar set-up; fiery orange pieces of lobster heaped amongst egg spaghetti; tiramisu that’s delivered as a full pie tableside, with one enormous scoop lumped onto a share plate. You want people to know you’re here.

If you’re starting with a platter of oysters, it’s worth ponying up so at least some of those briny little babies are topped with pops of caviar. Oysters and caviar ($6 each for natural; $20 each for caviar) sure set the tone for opulence. If you’ve got the dosh, that ambition only picks up with a wooden box layered with the aforementioned caviar service ($295). Spread the mascarpone generously, spoon on some chives, and top with ARS Italica oscietra. But be warned, it obviously sets the standard very high for the night.

So high in fact that not much else stands a chance. Although other antipasti options try their best. Local burrata ($29) is served with salsa verde and green tomato for a garden-fresh palate. Nice enough. But the real winner is the daily crudo selection ($48), mounds of finely cubed and chopped raw fish swimming in a rich crustaceans oil with some mild Calabrian chilli.

If you’ve ordered the signature trofie al pesto ($35) then your table should already be flanked by a giant mortar & pestle, wheeled out inconspicuously so freshly picked basil can be crushed into toasted macadamia nuts, pine nuts, and Puglian EVOO. The pesto wafts a mild herbaceous scent onto the table while antipasto dishes are picked clean.

The staff return with some freshly rolled and twisted trofie, invoking one of the signature products of Liguria. The pasta is tossed with the pesto and topped with grated pecorino and parmigiano. The show alone is worth the $35. The taste, however, is not. While the freshly made pesto can hook onto the tapered ends of the chewy trofie, the nutty palate is too light and underwhelming.

Can the most expensive pasta dish on the menu make up for it? No.

You’re paying $225 for whole, or $125 for half, if you want the musically-inclined (the Abruzzo-originated pasta is famously made using guitar strings) spaghetti chitarra a’Mare. Densely layered, the egg spaghetti is flecked with rock lobster, cherry tomato, garlic, basil, and chilli. The menu doesn’t list salt. It should. The kitchen went too heavy on the salt here, at least on my visit. So heavy in fact that you’d be forgiven for picking around the spaghetti trying to fish out as much of that beautifully rich, chunky lobster meat as possible. Hey, at least the lobster is spectacular.

The hero of the pasta dishes is instead the casoncelli. The ravioli-like pasta, best credited to the Lombardy region, is here filled with a deliciously creamy blend of pumpkin, hazelnut, and sage, and topped with parmigiano reggiano. You’ll fork out $34 for the unadorned version, $99 to pimp it up with some caviar, and a bit extra if you instead want it with a side dish of truffle. Whichever of the three routes you choose, make sure this ends up in your mouth – you’ll need a bit of faith restoration if you’ve followed my order and went for the other two pasta dishes. 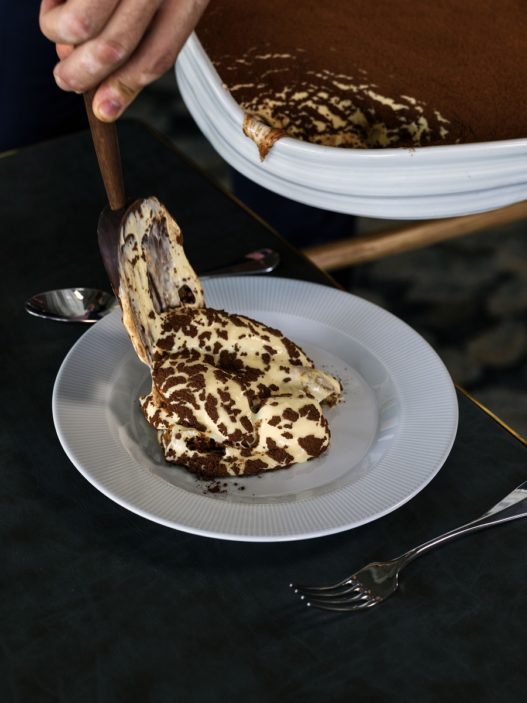 There are a number of dessert options to cap a feast at a’Mare.

Most would go for the tiramisu – another romantic option for those who want to sync with Pavoni’s old-school vision. The pie of tiramisu is bought to the table as a whole and, as mentioned above, spooned for the table. I’ve only ever had tiramisu served according to this tradition in one other restaurant in Australia, that being Santini Bar & Grill in Perth. Although here the crucial balance is missing. Perhaps it needed more time to set, or the kitchen went wild with mascarpone and forgot about the coffee.

Similarly disappointing is a rich hazelnut dessert akin to a giant ferrero rocher. Perhaps a better choice would have been the lemon sponge, or the gelato fior de latte service – one last attempt at tableside theatre where gelato is sprinkled with various toppings in front of you. The latter is invariably the most popular dolci as far as I can see as I get up to leave.

a’Mare is inspired culinary theatre before the food even this the place. It really is all about the service here – gentle, attentive, but still showy enough to remind you that you’re in Sydney’s newest big-ticket “casino”. I have little doubt Alessandro Pavoni can turn this into the show-stopper it promises to be, but some of the dishes don’t quite justify the prices. A gorgeous menu with plenty of options, sure. But you’ll still need to make the right choices to avoid a few underwhelming dishes.

Is it one of the best Italian restaurants Sydney has to offer? Make the right choices and it’s definitely up there.

The writer dined at a’Mare as a guest of Crown Sydney.