Flights between Australia and the USA right now are under $799

There’s a bit of a price war going on over the Pacific right now, and the winners are us as consumers. Whether you’re flying to Honolulu or Los Angeles from Australia’s East Coast, full service airlines such as Hawaiian, Qantas, Virgin Australia and Air New Zealand are offering fares below $800, and even as low as $755 for the popular Sydney to LAX routes through some sites, or $680 return to Honolulu.

The even better news is that these fares aren’t just limited to an obscure off peak time in 2019, but as soon as this month – and even in the peak travel time of December. What’s fuelling the discounts? Likely the high US dollar, which is making the US a more expensive destination for travellers. But also increased competition in the market from budget carriers and full service carriers alike, with more services over the Pacific than ever before.

A quick search on flights through the popular app Skyscanner shows flights for $774 return with Air New Zealand and $790 return with Virgin Australia, for Sydney to LAX. And that’s for a return trip within the next month!

Christmas has definitely come early, because these are the cheapest fares we’ve ever seen on the route. 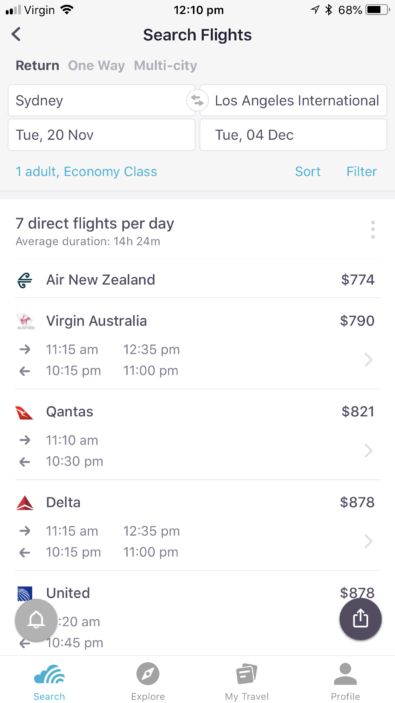 So how can you take advantage of these fares? Search for dates through websites like Expedia, Skyscanner, talk to your travel agent or book directly through the airline. These fares won’t stick around, so don’t wait too long…