As part of our brand new section AU Abroad, we bring you a birds eye view of the world of travel. In this article series, we let you in on the best airlines to fly with. We kick things off internationally with Virgin Australia’s flagship service, taking guests on an affordable direct service from Sydney to Los Angeles International’s new Tom Bradley terminal.

Frequent Flyer Program: Velocity, Silver
Benefits/Lounge Access: Silver status provides two complimentary lounge passes, but that can only be used for domestic travel. Silver status is fantastic when you’re flying internationally, however, as you get priority for your baggage, priority through customs and additional baggage allowances. Plus, you get to board early, meaning you get to see the plane when it looks like this! 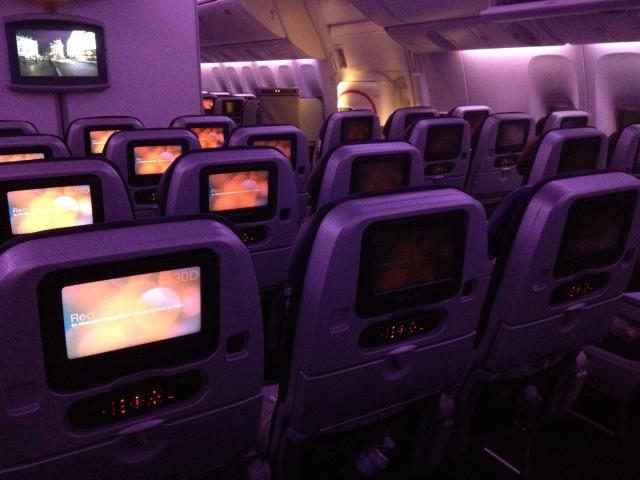 Meal Service: First meal service was dinner, and you could choose between the Parmesan chicken with mashed potatoes, carrots and broccoli, a beef chili con carne and a bean and cheese enchilada. I went for the chicken which was surprisingly good and served with chocolate moose, caesar salad, roll, crackers and cheese. Filling and served comfortably with a whiskey and ginger ale.

A melted pesto vegetable sandwich from Paddington market was served for snack service, and chips and sodas are available throughout the flight at a self-service spot in the centre of the economy cabin.

Breakfast was scrambled eggs with hash browns and sausages, or potato hash with bakes beans, spinach and mushrooms, served with an apple and cinnamon muffin, fruit and OJ. I went for the latter, which saw the muffin as its highlight.

In-Flight Entertainment: As always, the entertainment system was top notch, with more entertainment than you could possibly need for a 14 hour flight. You can watch entire seasons of TV shows, the full Lord of the Rings trilogy and more… all alongside the biggest blockbusters and the recent troupe of Academy Award winners – which for me was great to catch up on.

I’d already watched almost an entire film before take off, thanks to some delays, and made my way through three other films along the flight! Productive!

There is also USB power at the seat and connectivity, however there’s no in seat power for your laptops which some of the more premium airlines provide, like Singapore and even Qantas. This is probably the only thing that Virgin don’t match the premiums on… Strangely though, there’s a note in the RED entertainment unit that there is a power plug slot, so maybe it’s just specific aircraft or seats that don’t have the in seat power? Or something coming soon?

Comfort: With a seat empty next to me, I was able to stretch out just enough to be comfortable – but in my experience, even without that room, Virgin seats provide enough recline and foot space to give you just enough comfort to get some sleep – even in Economy. Unfortunately, I’ve never had the luxury of flying one of the other classes to compare – but I’m saving up the points!!

Customer Service: Polite, courteous and helpful both on ground and in the air. The seat next to me was actually locked off when I checked in, which was marvelous. During the flight, someone near me dropped their glass on wine, which saw the glass shatter – staff were quick to vacuum. I slept through snack service and they were kind enough to feed me when I woke up. With some airlines you get the sense that asking for something – anything – is like asking them to cut off their own hands. With Virgin, it’s always with a smile, and it’s that sort of service that puts them above the rest.

Extra: The seat next to me was empty which is always a bonus on a flight, especially an international flight. I always go for the middle aisle though as you rarely have anyone jumping over you. Water bottle was provided at your seat on arrival which is a newer addition to the Virgin service. You’re then able to refill the bottle at refill stations in the cabin. They also still provide you with ear plugs, a pen and an eye mask, which many other airlines do not, alongside the standard headphones, blanket and pillow!

Also worth mentioning is the fact Virgin now lands at the new Tom Bradley International Terminal, which is a might brighter welcome than the old terminal they landed in… and on your flight home you’ll enjoy tonnes of shopping and some great food in the terminal.