Earlier in the year, as we flew from New York City’s JFK to London’s Gatwick to make it to The Great Escape, AU Abroad’s Larry Heath tried out the service of Norwegian Airlines for the first time. It also marked his first flight on the new Boeing 787-800 Dreamliner. A budget airline along the lines of Jetstar, this route is often the cheapest way to get from the US to the UK. The only catch is that it’s a red eye… let’s see how Larry fared in this week’s flight review:

The check in process at JFK Terminal 1 was pretty painless. I arrived just over 2 hours before my flight and didn’t have a queue to deal with at the airline counter. The check in lady seemed to have never seen an Australian passport before though, having to get a second opinion in regards to the Visa requirements travelling to the UK, which slowed things down. Customs was a long line but it moved quickly.

Once through security, the area only had ten gates, so the options for food were limited, but there’s a good amount of shopping (surprise surprise!). This in mind, it may be best to eat before you pass through security, where possible. There are a couple of fast food sandwich places (“Panini Express”) and then three bars, one of which serves its own hot food – though it was, naturally, not serving food at 9.30pm when I arrived for my late night departure. A Starbucks was also hidden away.

The terminal offers thirty minutes free wi-fi, which I had trouble getting to work in the first instance, but was better than nothing. For whatever reason, my T-Mobile’s internet connection didn’t want to work in the terminal – others seemed to be having the same issue, though I couldn’t say if it’s a regular occurrence.

Once it was time to board, it was a bit of a nightmare. There was no line, just a moshpit of impatient people. I bumped into a friend who was taking the same flight and opted to stand back and wait until the flight was almost fully boarded before I bothered entering the scramble. Of course, it made no difference and I got my seat just like everyone else. The airline definitely need to signpost everything better, and set up a more organised boarding system – but also, guests need to relax as well! We’ll all get on the plane… eventually!

As the flight filled up, so did the storage bins above our seats. Stewardesses were incredibly unhelpful with baggage, as people fought over what remained. As some asked for help, they were largely ignored or told to put the bag under the seats in front of us, in spite of room available elsewhere in the cabin. As a frequent flyer I knew if I moved further back in the cabin I’d find a spot for my bag, and of course I did – the 787’s have increased storage. But we were on our own, which was unnecessary.

The service was better for the flight itself, and a touch screen ordering system seemed to work well for those around me, with reasonably fast service.

I prepaid a “package deal” that included an allocated seat (recommended as you don’t want to end up in the middle on these budget airlines), meal and checked baggage. I opted for a window, more out of curiosity of the 787 experience than anything else (normally I’ll be on the aisle in the centre). Of course a window seat gives you something to lean on, but it also pretty much ensures you’re living in something of a prison for your flight, especially on a red eye when many flyers will try to go to sleep the minute they sit down (and fair enough too, this isn’t a long flight and you arrive long after the sun has risen). But I made an exception here so I could experience the much talked about windows, with touch sensitive tinting. They were also the largest I’ve ever seen on a plane, giving you a pretty amazing view of the flight path and that technically impressive wingspan. 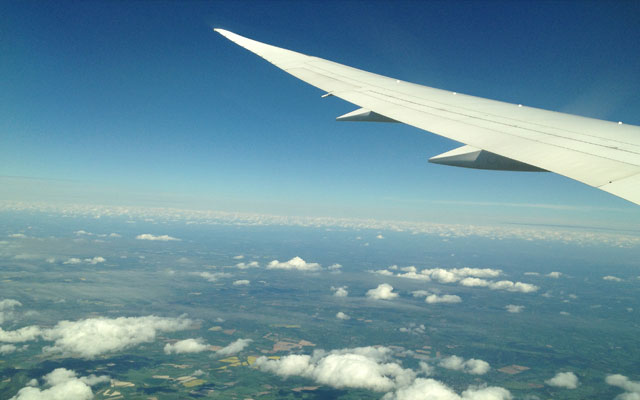 As for the seats itself, for a budget airline, you’re sitting pretty comfortably. With a seat width of 17.2″ and pitch of 31-32″, it’s comparable to almost all the aircraft doing the same route – even better than a few. There was more than enough leg room and your headrest was movable with side flaps for added comfort.

The flight was a smooth one. They say the 787-800 is designed to provide a different level of air pressure, promoting comfort on board and a decrease in jetlag when you land. When you’re on a red eye with the ability to get three or four hours sleep at most, nothing is going to help you there – but it’s difficult to describe. Maybe it’s the more precise and less extreme temperature control. Maybe it’s the air pressure. But either way, you do feel a lot “fresher” on landing and irrespective of it being a budget service flight, my first day in London was a lot better for it. They don’t waste any time in telling you how revolutionary the aircraft is, either, with a prerecorded announcement about how great the 787 is at take off.

We were delayed about 20 minutes on take off, thanks to being rerouted at JFK – we essentially had to take a three mile long scenic route to another runway, as the pilot politely put it. No doubt typical behaviour from one of the busiest airports in the world. We ended up making up a bit of time in the air and were departing the plane about 15 minutes later than scheduled.

Designed more like a iPad touch screen than a traditional seat back entertainment unit, the devices on the back of the seats have USB charging, and a headphone slot on screen, rather than in your arm rest. The touch screen was comparatively small, but there was a decent selection of films and TV shows to watch as well as albums to listen to. Thankfully this is one aspect of the flight that is included in the price of admission. I watched an episode of something while I ate and then tried to fall to sleep as quickly as I could.

Meals and other optional extras:

For those who had pre-purchased a meal, it arrived shortly after take off, with a chicken or beef option, accompanied by a choice of wine, beer or soft drinks. Spirits were an additional $8. There was one additional service with tea, coffee or water after. A cold meal was served before landing, though I slept through it. The dinner I had was the chicken chipotle, served with a salad and a muffin. It was a small portion by any standards, but it tasted fine. 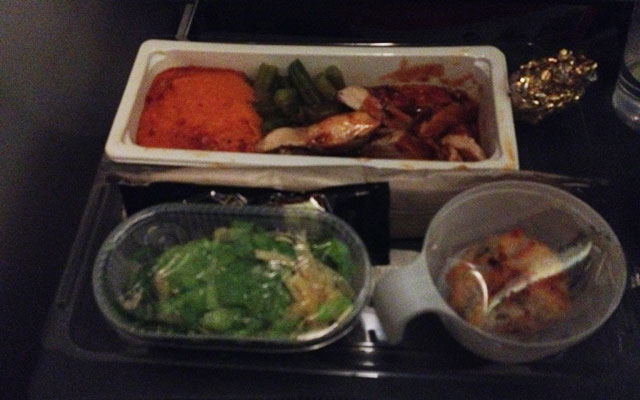 After the main meal service, you could order additional food and drinks on the touch screens at any time. At US$10 for a cheese sandwich, however, I didn’t see too many people taking up the option. If you wanted a pillow or a blanket you needed to pay for it. US$5 for blanket gives you the idea of the costs involved. Typical for a budget airline, though still a frustrating additional expense. Thankfully the plane was at a comfortable temperature and the blanket wasn’t necessary in any case.

Arriving at Gatwick is rarely a first choice for those travelling to London, as it’s further away than Heathrow or City Airports – however it’s a fantastic option if you’re heading to Brighton, or somewhere in that vicinity. If you need to get to London, however, we recommend the Gatwick Express service. It’s not cheap, but will get you from point to point in around 30 painless minutes. For more details head to http://www.gatwickexpress.com/.

One of the benefits of arriving at a smaller airport, too, is that you’ll be greeted with shorter queues and faster disembarkation than you would at Heathrow – and that was certainly the case. It’s not a bad option at all, in the end. Though allow for the extra travel time on landing.

This is a budget airline and you’re getting what you pay for in terms of service. But you’re flying on the airline industry’s most talked about new aircraft, which, in its very nature, makes for a much more comfortable ride than you would expect. A 6 hour red eye flight is never going to be an experience to write home about, because it ensures you get less sleep than you need, but there are a lot worse ways of doing it than on a Dreamliner. And it helps too that you know you’ve saved a lot of money in doing so. We happily recommend the service – just always keep in mind that you’re getting what you pay for and enjoy the little extras along the way…

For more details about the airline, and to see their full network of service, head along to their official website: https://www.norwegian.com/en/

The writer flew at his own expense.