This time last year, I flew from the Calgary Stampede to Ottawa Bluesfest (both happening right now!) on board Air Canada‘s regular service between the two cities. Lucky enough to get bumped up to Business Class on the flight, here’s a look back at that journey.

Scheduled Flight Time: 4 Hours
On Schedule? Over 2 hours of delays due to lightning.

Air Canada’s Frequent Flyer program is Altitude. Air Canada are part of the Star Alliance Network, so you’ll be able to get points if you’re with a partner airline on that network, like Air New Zealand.

Check-in was quick and easy. I was allocated an economy seat originally and then lucky enough to be bumped up to business class at the gate. The baggage you’re allowed depends on your ticket type. Head HERE to work out what you get.

There was one main meal service on the flight for business class passengers, and you were provided with three mains options. I went for the steak, which wasn’t bad, served with a potato cake and veggies in a gravy. Proper knifes and forks are served with the meal, as well as cake, bread and a salad. 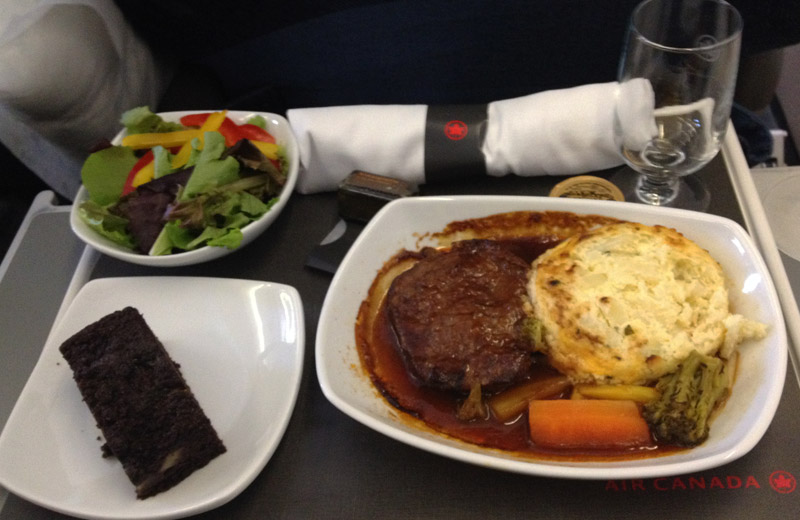 Earlier, cashews and almonds are provided with the first round of drinks. Later, there’s a chip and snack service and fairly continual drink offering as the flight attendants made sure you were never empty (If you didn’t want to be).

There are screens in front of you, both in business class and economy, and a USB on screen to charge your phones and tablets. In business there’s also a plug next to the seat. A 4 hour flight time is more than enough to watch a movie and a couple of TV episodes. I caught a Canadian program I’d never heard of that had Eugene Levy in it – he has the best eyebrows doesn’t he? They have plenty of entertainment for the flight, provided complimentary.

It’s pretty classic Business Class comfort here on the Air Canada Embraer service. You’re served a hot towel early in a flight and there’s a pillow for you on the seat. Blankets are available by request – as this is an afternoon flight they’re not sitting there as standard. These are wide seats, though older models. The head cushion has movable sides and the seat is more than comfortable enough for the 4 hour flight. The flight wasn’t too bumpy for its duration, though it was a lengthy take off due to the weather, and it was a while before we were able to move about the cabin.

Both on ground and in the air the Air Canada staff were fantastic. Though we had a two hour delay due to lightning, they kept us well informed and didn’t let us board the aircraft until they knew we were going to take off. In the air, I was given constant attention – thanks to being in Business Class – and didn’t spend much time on board without a drink in my hand. Which is time well spent.

About your Departure Airport, Calgary:

One thing I wanted to mention about the departure airport at Calgary is what a great airport it is to both leave and depart from. A lot of this has to do with the vast amount of volunteers who help out at the airport; retirees who are there to greet people and help them get to where they need to go. And everyone is wearing white hats! It’s great for the airport to encourage this and those who volunteer seem to really enjoy it. And as a traveller it’s great to see a smiling face on arrival who wants to help – and not just rip you off with something or other, as is prevalent in many airports around the world.

The writer flew in July 2015 with the support of Destination Canada.