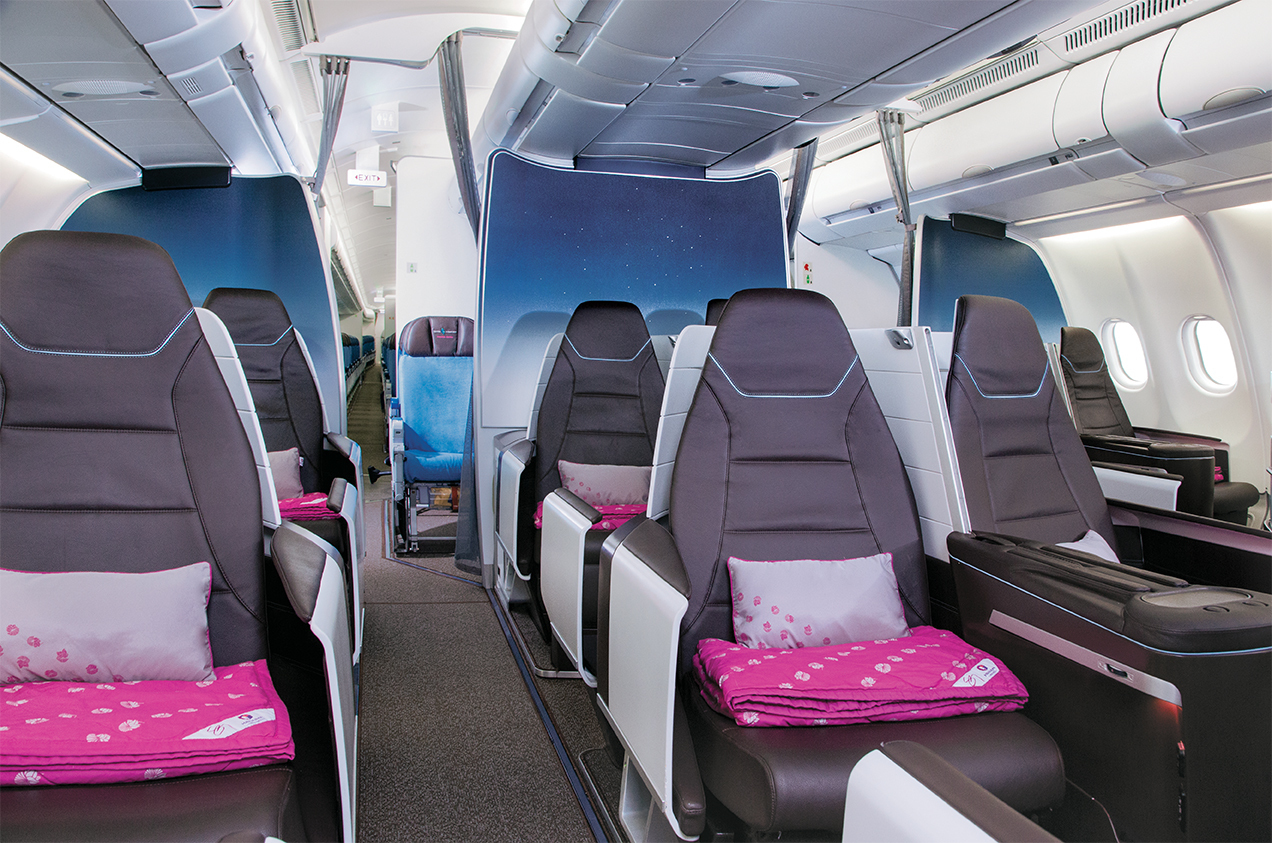 There are a number of airlines flying from Brisbane to Honolulu, but what is it like to fly with Hawaii’s flag carrier? Flying direct, competitive pricing and kick-starting with the Aloha Spirit from the moment you board – all benefits to flying with the fourth largest airline in the USA. But what else? Sally Scott took the skies to find out, testing out business class on Hawaiian Airlines’ A330-200 from Brisbane to Honolulu.

Getting to Brisbane Airport

Getting to Brisbane Airport is easy. The Airtrain is an affordable and convenient way to get to the airport or an Uber from the city is around $35. On this occasion, I was travelling from Newcastle on Jetstar and therefore had to transit from the domestic to international terminals.

It was a simple process. Once you’ve collected your luggage and exited the domestic terminal; there is a free shuttle bus that scoots you across to the international terminal. It was well signed and easy to navigate.

As Hawaiian Airlines doesn’t have a dedicated lounge at Brisbane Airport, the option to utilise the Plaza Premium Lounge and Wellness Spa was available to us. It’s a pay-per-use lounge and is smaller than the major airline lounges but still offers travellers comfortable seating, a quiet sanctuary away from the crowds to relax before your flight with a range of food and beverage options, free Wi-Fi and more.

Normally around AU$65 for 2 hours, it’s complimentary for first and business class passengers on
Hawaiian Airlines. Brisbane Plaza Premium Lounge is located on Level 4, between Gate 81 and Gate
82 and is easy to find.

The check-in counter opened 3 hours prior to departure, though the process was a bit confusing, as the self-check kiosk didn’t issue a bag tag. Other passengers also appeared confused by this and we were finally ushered to line up for manual bag check-in, which seemed a clunky process.

As a business class traveller there was a separate priority line, which meant I became first in line. Business class passengers are generously permitted two pieces of luggage up to 32kg, obviously anticipating some serious shopping in Hawaii.

After relaxing in the Brisbane Plaza Premium Lounge, I headed down to the gate, which felt disorganised with passengers being shuffled into various lines. A few people were asked to step aside behind some intimidating looking barriers, presumably for extra security checks.

As such, I found the boarding process not as streamlined as other airlines.

Upon boarding, I was quickly shown to my business class seat and promptly served a signature Mai Tai garnished with pineapple. This delicious tropical cocktail really kick-started the holiday vibes before take-off.

Dinner service showcased some Hawaiian flavours thanks to the inventive menu by Executive Chef Lee Anne Wong. Wong owns the amazing Koko Head Café in Honolulu, which is a must-visit once you land.

The dinner menu included a Yellow Lentil Curry Soup, which was flavoursome and delicious followed by Lemongrass Chicken with Roasted Vegetables and a Lilikoi-Chili Sauce which was a hearty serve despite the menu being billed as “light dinner”.

Dessert was a Lemon Polenta Cake with a berry coulis and garnished with mint. Wine pairings are by Master Sommelier Chuck Furuya and included Ancient Peaks Chardonnay from California and Sella & Mosca Cannonau Di Sardegna Riserva from Italy.

Snacks were available upon request during the flight, although after such a filing dinner I found no reason to indulge. Prior to landing you may choose between a light continental or full breakfast. The full breakfast included Kim Chee, Tomato and Cheddar Quiche with Pork Sausages, Seasonal Fruit, Warm Croissant with Butter and Australian Beerenberg Strawberry Jam.

Coffee is by Lion Coffee, one of Hawaii’s favourite coffee brands, with an exclusive blend designed to still hold on to its bold flavours when brewed on board at high altitude. The meals were well presented and came with the cutest mini salt and pepper shakers, completing the white-clothed, business class experience.

In business/first class, the configuration is 2-2-2 with a total of just 18 passengers, making for a quiet and comfortable travelling experience. In row 1 there is a little footrest while you’re upright and then the seat transforms to a lie flat bed with premium bedding for the overnight flight.

The entertainment system consisted of a large format tablet that the flight attendant popped in to the adjustable in-seat tablet arm. It is meant to allow viewing at all angles, but we found it really didn’t sit straight so you were watching movies at a bit of an angle. The inflight entertainment had a fairly limited selection and had to be stowed during take off and landing.

Each business class guest is presented with a premium amenities kit designed by local designer Sig Zane Designs featuring the Lehua flower in its design. The kits included the usual suspects like socks, toothbrush, earplugs etc however we were disappointed that so much was wrapped in single use plastic. It would be great to see Hawaiian Airlines move toward reducing the amount of single use plastics on their flights.

On Arrival in Honolulu

Honolulu Airport is a primitive looking airport but there are plans for a refurbishment. The airport is approximately 20 minutes to Waikiki. There are various shuttle services as well as Uber or Lyft. We had pre-arranged ground transport with Executive Chauffeur Hawaii (echawaii.com) and I’d highly recommend Dustin Kalei who was professional, courteous and provided lots of wonderful local tips and recommendations during our journey.

Hawaiian Airlines flies direct three times weekly from Brisbane (daily from Sydney) to Honolulu, making it an affordable and convenient choice for a Hawaiian holiday, conference group or business trip. While it might not feel quite as luxe as some of its competitors, service is efficient and the meals and décor really embrace the Aloha spirit of the Hawaiian Islands to put you in the holiday mood.

To book your next flight with Hawaiian Airlines visit hawaiianairlines.com/

The author was a guest of Hawaiian Airlines