Some of Phuket’s most beautiful national parks and jungle trails are actually found north of the airport. While much of the island’s often chaotic nightlife kicks off in the opposite direction, it’s the unspoilt natural beauty and lush landscapes that make heading up the right choice for visitors to the famous island.

Though that doesn’t mean North Phuket doesn’t know how to party. In perhaps what is the best possible balance between a lively Phuket lifestyle and a more peaceful journey into the island’s beauty, the relatively new Baba Beach Club seeks to offer guests an all-in-one experience. You’ve got some of Phuket’s biggest bucket list destinations nearby, exceptionally comfortable luxury accommodations, and a party life that both channels the best of Ibiza and reimagines it as something much more relaxing.

To give you a bit of a better idea of what to expect from Baba Beach Club, here is an overview of the luxury property and the type of itinerary you can build around it. 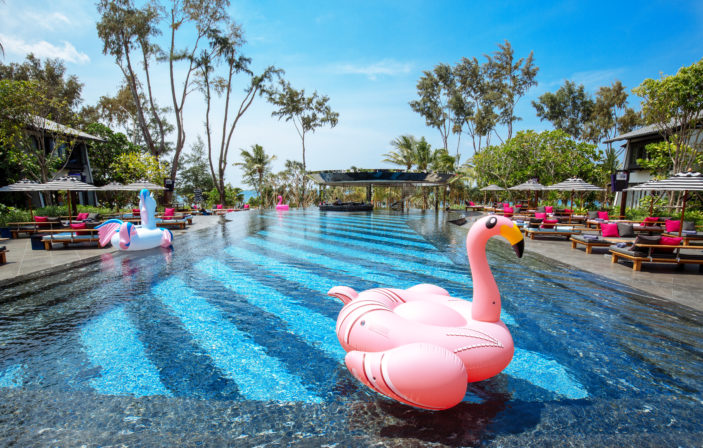 Owner Wan Issara opened Baba Beach Club in 2017, seeking to splice luxury living he perfected with the famous Sri Panwa and ambitious hybrid of Ibiza and Phuket, bringing something entirely unique to Thailand’s most famous island.

And it’s also opened up a very smart resort option just a short 20 minute drive north from the international airport.

Anyone who has been to Phuket before would know that location matters a great deal. A big reason for this is that it’s just so damn frustrating to drive anywhere across the island, mainly due to constantly chaotic traffic.

So having a resort like this so close to the airport is invaluable.

Though location is nowhere near the defining point of Baba Beach Club. As the younger, more musically discerning sister of Sri Panwa and its staggering sense of luxury, this relatively intimate property, fronting gorgeous Natai beach on one side, and creeping into jungle on the other, pushes itself as a funky, incredibly trendy Thai answer to the famous beach clubs of Bali (and the aforementioned Ibiza).

The accommodations are immaculate; bright and relaxed spaces, with the lounge area and kitchen on ground, and the bathroom, bedroom and walk-in wardrobe up top.

More so than many other similar styled resorts, the lounge area can be completely opened up to the villa’s individual garden, which also faces the pool area separated only by a small French door. This breaks down any barriers and really welcomes the entire resort in, shaping the social vibe of Baba Beach Club.

Although the party vibes were winding down during my stay, I could imagine this openness being extra special if one of the club’s regular festivals or events were on.

Behind these Gabana Villas are more accommodations, and across the road to the jungle side are private residences and larger villas best used by longer-term guests.

There’s also a large clearing within the jungle that the club uses for events, such as when the very well-connected Issara brought Ibiza’s famous Circoloco festival to Phuket.

Though none of this would mean much without good service. A $300,000 sound system, curated playlists that you actually would want to listen to, tech-forward rooms with expensive Bluetooth speakers (Marshall downstairs, Bose upstairs), and a beautiful – Instagrammable – line of crooked palm trees vaguely separating the resort from the beach: all fantastic. But it’s the service that ties it all together.

Seeing as Baba Beach Club is so well placed on the Northern tip of Phuket, the staff are well trained at taking the guest experience beyond the club and helping guests explore the bucket list surrounds.

If you’re headed to Baba Beach Club to stay a few nights, whether it’s to soak up one of their regular events, or escape Phuket’s more typical spots, be sure to take note of the following four activities. Having easy access to all of them will definitely make the most of a limited time on the island, and the Baba staff are able to help with organising them to ensure no hiccups occur along the way.

You’ll get this suggestion no matter where you go in Phuket. Phang Nga Bay is a world renowned icon, vast and absolutely breathtaking at times. Cruising through the seemingly endless expanse of dazzling green water only to brush gorgeous limestone cliffs and float by small islands is a Phuket essential. But the bay is most famous for Koh Tapu, which is otherwise known as tourist favourite “James Bond Island” with the very uniquely formed rock you always see on Instagram.

If you’re staying at Baba Beach Club, just tell the front desk you want to zip on over to James Bond Island and they’ll book you into a long-tail boat. It’s about a 30 minute drive to Surakul Pier (a shuttle is available from the hotel), and from there a 20 minute ride on the long-tail boat.

While you’re over at James Bond Island look nearby to find the bright red barge of Newfern Sea Canoe. Call ahead to book in, and let them take you canoeing around, through and inside the caves. It’s an incredible experience, with good service and plenty of photo opps. There will be someone taking care of all the rowing so grab a beer and relax. 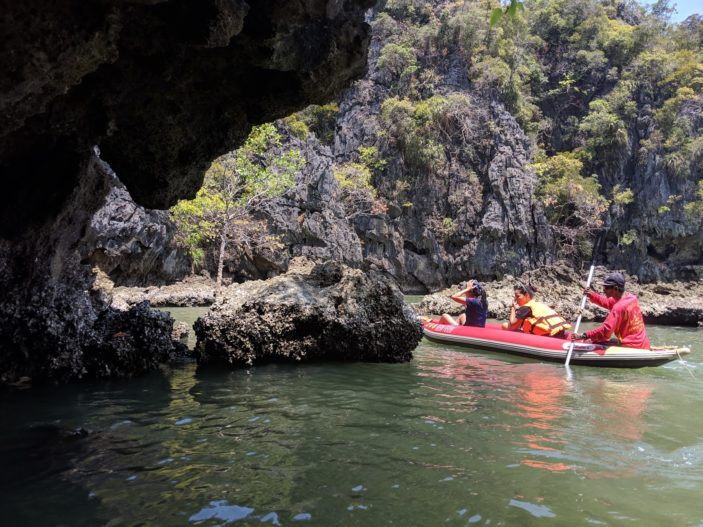 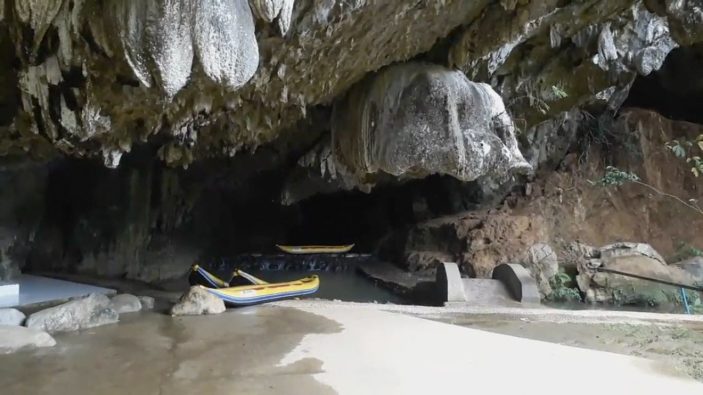 Phuket is packed with fascinating caves glowing with the highly attractive colours of limestone, and the jagged formations that make them so unforgettable. Luckily one of the island’s best is only around a 40 minute drive from Baba Beach Club. Phung Chang Cave (AKA “Elephant Belly Cave”), which is open to visitors until 5pm each day, is a 600 metre run of some of the most gorgeous formations you’ll find in Thailand. You can canoe or take a bamboo raft through here, which will take around one a half hours.

If there’s one activity you must do on this list, it’s visit Ko Panyi. If you’re doing the aforementioned kayaking and James Bond Island options then this is an easy detour on the way back. Also located in Phang Nga Bay, this colourful Muslim fisherman village stands strong on stilts in the emerald green waters.

Around 315 Muslim families live together in this community, which is best known for its fresh seafood restaurants and vibrant shopping walks. It gets quite packed in high season, so locals always bring out their wares and hand-crafted goods for sale. Plus, not many villages offer this kind of view while you’re dining on full-flavoured seafood. 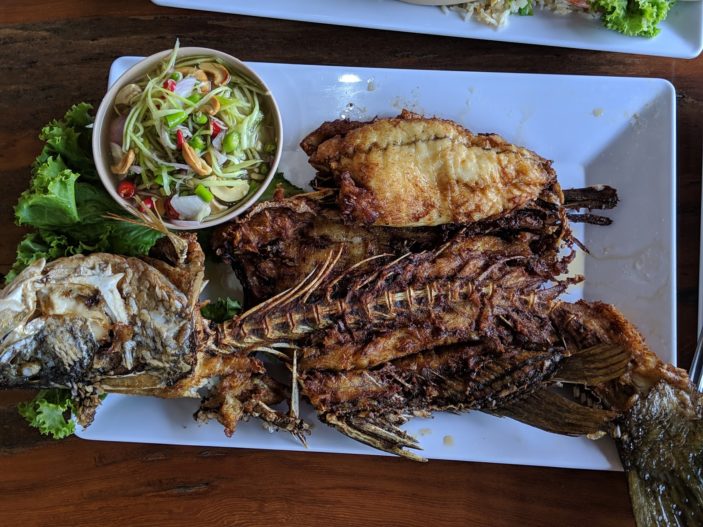 The village is also famous for its – out of all things – football club. Panyee FC was formed by locals back in the late 80’s when a bunch of footy enthusiasts, inspired by the 1986 World Cup, decided to build a floating football pitch so they could practice. Documentaries have been made about how that one decision lifted the entire village out of poverty and unemployment, with Panyee FC going on to win seven consecutive regional championships and become one of Thailand’s most celebrated football clubs.

Now disused, you can actually visit the pitch – although actually standing on it is not advisable. And it’s definitely something that needs to be seen in real life, surrounded by the bay’s natural beauty and those towering limestone cliffs. With that kind of daily inspiration, the club’s success is of little surprise.

Here’s a short little documentary about it

Again, just tell front desk at Baba that you want to visit Ko Panyi during your trip out to the bay and they’ll take care of the rest.

The writer stayed as a guest of Baba Beach Club. The average nightly rate at the resort starts from AUD $544 for a Baba Suite.