There are few places in the world which change as regularly as New York City. The dynamic, kinetic centrepiece of the U.S is rightfully one of the most common answers to the question “what is your favourite city in the world?”, with it’s unmatched landscape of world-class restaurants, museums, comedy clubs, public parks, and distinctive neighbourhoods.

Chances are you’re going to be overwhelmed searching for cool things to do in New York before the year is over; there are just so many experiences laid out in front of you, so to help lessen the load we’ve gone and rounded up five things you must do in New York City for the rest of 2018. There’s plenty of art exhibitions going on, that aren’t at your typical spots like MoMa and PS1, as well as fresh new openings on the Lower East Side, and the chance to witness the birth of New York’s newest neighbourhood. Make sure you fit these ones in between all the typical Big Apple essentials.

Celebrate 30 years of The Peninsula 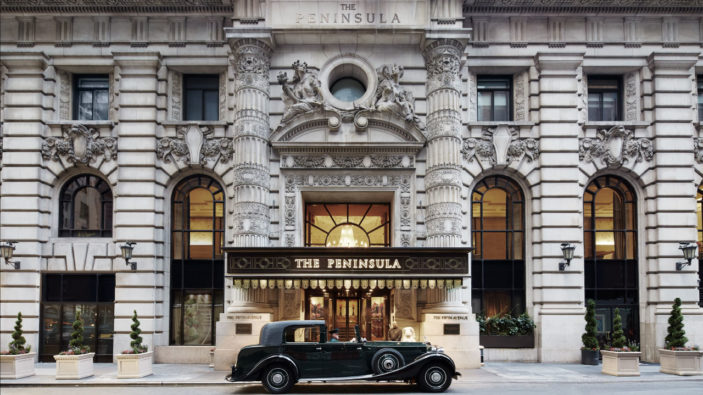 You’ve got until the end of October to catch the last few weeks of a new pop-up exhibition at The Peninsula New York. As part of their 30th anniversary, the beautiful high-end hotel has introduced a curated art exhibition paying homage to some of the 80’s most celebrated artists, hosting some of their original works throughout the property’s public spaces. Not that the Peninsula needs any more character, but this is a good chance to immerse yourself in a substantial temporary makeover, whether you’re a hotel guest or just popping in.

The artists displayed throughout the hotel include Andy Warhol, with 10 original screen prints of his “Campbell’s Soup” in the upper lobby seating area alongside additional works like “Sausage Tree” (1986) and “Diamond Dusk Candy Box” (1981)”; Keith Haring, whose large-scale piece, “Untitled”, overtakes the lower lobby seating area to greet guests, filling the space with red and black hues painted on metal, in addition to his other works like “Untitled Subway Drawing” (1, 1981-1985) on display to the left of the Concierge desk; Italian contemporary artist Francesco Clemente, with “Number Five” (1985) on view across from front desk reception, and his self-portrait of Warhol (1982-1987) in the Palm Court; Barbara Kruger with “Untitled, Your Pleasure is Spasmodic and Short Live” (1980), also in Palm Court; and finally Jean-Michel Basquait with various works throughout, including “Untitled” (1984) at the top of the stairs of Gotham Lounge.

In addition to these works, the exhibition features three iconic portraits of Warhol and Basquiat by famed photographer Michael Halsband, inspired by boxing-style posters and shot in 1985 to announce the collaboration of the two artists for a future exhibition. The three portraits are all proudly displayed in the Palm Court.

Most of this exhibition will start to wind down at the end of October, so be sure to get in quick if you’re in New York this month. The Peninsula has been celebrating their big 30th anniversary in other ways as well, so be sure to head to the website listed below to keep up to date.

Walk on water at the Rubin Museum Gallery

Ever wanted to walks across water on wooden disks sourced from non-native trees species? Yeah you do. You’ll get the chance with Matti Braun’s new site-specific work at Rubin Museum Gallery, an immersive work that will remain in the museum until 4th February 2019. Titled “R.T/S.R/V.S”, the piece is the focal point of the final rotation of three-part exhibition “A Lost Future”, which features art in an evocative range of mediums by Braun as well as Shezad Dawood and The Otolith Group. The idea is that by challenged existing histories and considering speculative futures, the artworks will offer guests a unique way of exploring “The Future”.

Guests walk on slices of tree trunks peeking above the water on an in-gallery lake, engaging a piece built from an expansive range of materials and medium from an artist whose practice is grounded in rigorous intellectual and skill-based research. The piece forms a bridge between Braun’s extensive research and a science fiction script, The Alien, by Bengali filmmaker Satyajit Ray. For example, the first scene in Ray’s script concerns a friendly alien from another time who lands in a small Bengali village and described a lotus pond, which has been referenced in the work.

Most importantly, the tree logs which guests walk on were sourced from local, non-native trees, said to represent the question of “alienness”.

Welcome the new faces of the Lower East Side 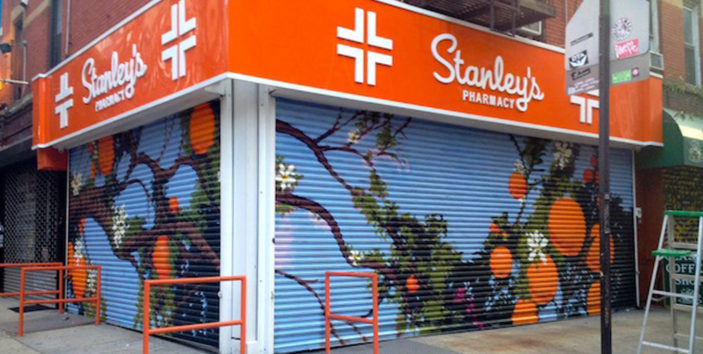 If you’re heading over to New York you may notice a slight change with the NYC Ferry, which made its debut in the summer of 2017. They’ve just introduced their sixth and latest route, connecting Manhattan’s trendy Lower East Side to Queens’ Long Island City, Corlears Hook, Stuyvesant Cove, and E. 34th St. What’s more is that a one-way ticket on this route will set you back the same amount as a NYC Subway ticket ($2.75), so there’s little excuse not to spend more time on the Lower East Side as New York enters one of it’s biggest periods of change, ever.

There’s a bunch of new hotspots to check out on the Lower East Side so we’re going to give you a brief run down of the most exciting; make sure you’re putting these on your to-do list to get the most out of the L.E.S (in between your regular trips to Katz Deli of course). And while you’re out eating and drinking your way through the area, make sure you keep an eye out for the many murals that make up the 100 Gates project, an initiative which kicked off in 2014, aimed at beautifying 100 security roll-down gates with street art murals.

First off, Randall’s Barbecue is one of the neighbourhood’s newest restaurants, no doubt adding greatly to the scene with a focus on slow smoking and a menu offering brisket, pulled pork and spare ribs along with smoked duck, lamb ribs, homemade pastrami (of course), smoked meatloaf and chopped chicken livers. It just opened at the end of August and from all accounts has been buzzing so far; make it a long lunch with a few craft beers before you head out to the nearby bars.

Teenage chef Flynn McGarry – you know, the kid who developed a cult following throwing dinner parties out of his mother’s house, which led to acclaimed pop-ups in L.A and New York – opened his first permanent restaurant earlier this year. Gem is a coffee shop by day and a dinner party at night with a whopping 12-15 course menu of bite-sized meals.

Those looking for some late-night crispy whole fish will be happy to know that Williamsburg’s popular Kings County Imperial has opened up on Delancey Street, while fans of Malaysian food will flock to new all-day café Kopitiam, which has reopened on East Broadway with an aim to preserve the fading Baba Nyonya tradition through its food.

If you’re fixing for a drink, head along to the neighbourhood’s several rooftop bars, the best of which include Mr Purple at the fab Hotel Indigo, The Roof at PUBLIC, Make Believe at SIXTY LES, and Hotel Chantelle.

Use your time on the Lower East Side to also check out the brand new location for New York’s iconic Essex Street Market, easily the city’s most historic public market which has now made Essex Crossing its home, with more space to accommodate existing vendors, welcome in a few new ones, and host private events. 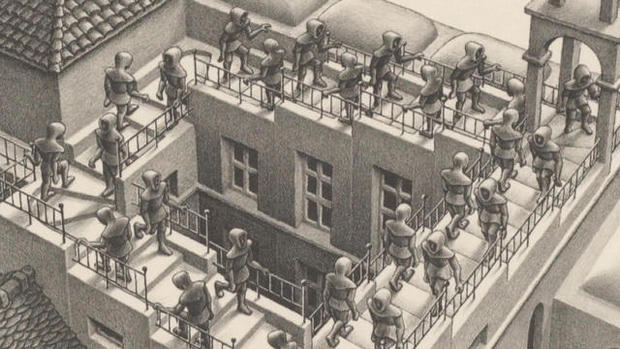 Over 200 works by iconic Dutch artist M.C. Escher (Maurits Cornelis Escher) are on display in Brooklyn’s Industry City and will be until February 3rd 2019. The comprehensive collection is the American debut from Arthemisia, Italy’s leading art exhibition producer, and the vision of curators Mark Veldhysen and Federico Giudiceandrea, brought to Brooklyn after massive success across Rome, Bologna, Milan, Singapore, Madrid and London.

Art and design lovers visiting New York this year would be wise to head along and witness Escher’s enigmatic works: sketches and paradoxical designs famed for their incredible detail and mathematic precision, used to construct works far beyond imagination. Escher’s works are best known for their exploratory approach to art, mathematics, science and poetry, often sitting at the intersection of these distinctive disciplines.

If you’re up for some very complex and influential art then Escher: The Exhibition and Experience is most certainly unmissable. Plus, it’s a good excuse to head along to Industry City, which is one of the most intriguing and dynamic spaces in Brooklyn.

If you’re over in New York City this year, you’ll be able to witness the early stages of the largest private real estate development in the United States, and one of the most substantial changes in the city’s storied history. We’re talking about Hudson Yards of course, a 28 acre mega-development which upon completion will hold around 18 million square feet of retail, residential and office space, transforming a former rail yard into New York’s newest neighbourhood. It will house the city’s highest open-air observation deck, feature a multi-disciplinary arts centre housed in a groundbreaking transformable building, around 100 retail outlets, three dynamic public parks, and more.

Hudson Yard is being pushed as the future of New York City, and in the next few years it’s likely to be one of the most talked about modern neighbourhoods in the world. Of course you’re going to want to head on down to see this major extension of Manhattan, one that has been in the works for over a decade, before it truly takes off next year.