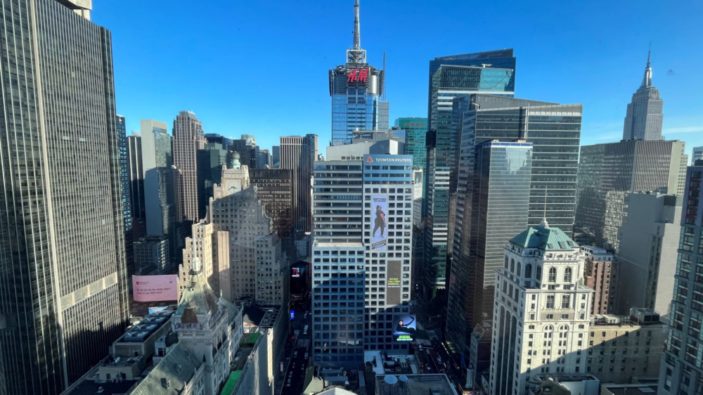 There’s always something new to experience in New York’s Times Square. And this year has been no exception, with new museums, hotels and Broadway shows opening every month. So what are some of the best new(ish) things to do in the heart of the Big Apple? I headed over earlier this month to get a taste of some of the newest attractions and activities that Times Square has to offer.

Soar over the city in RiseNY

Opening in March 2022, Times Square now has a permanent ride for tourists to enjoy. And it’s a surprisingly engaging and well considered experience.

You start off in a faux subway station, with an impressive immersive projection designed to make you feel like you are sitting in the city’s first station. The video that accompanies it is narrated by none other than Jeff Goldblum.

You then move through a museum, detailing the local history and global influence of New York City across a variety of creative mediums, before being taken back in time to New Years Eve 1958.

From there, you line up for the main attraction, a ride that sees you soar over New York City; an experience not unlike the Soarin’ attractions at Disney Parks (who premiered the technology in 2001), and FlyOver Canada, which you’ll find in Vancouver.

Now watch this teaser and enjoy the joy of Jeff Goldblum:

RiseNY is one of the attractions included in the Go City sightseeing pass, which gives you entry to an endless array of attractions in Times Square and around the whole city, or you can buy an individual ticket directly through the RiseNY Website.

Spend (at least) a night in Times Square

There’s no shortage of hotels in Times Square, and one of the newest is the incredible Hard Rock Hotel, which opened in May of this year. You can read more about that in my full review of the accommodation HERE.

And while it’s not a new build, the Westin New York at Times Square debuted a $39 million renovation in August, with new rooms, lobby and a restaurant – Foundry Kitchen & Bar. The hotel beams with comfort and sitting at the corner of 43rd & 8th gives incredible views of Times Square and surrounds. The view from my room is featured in the header of this article. 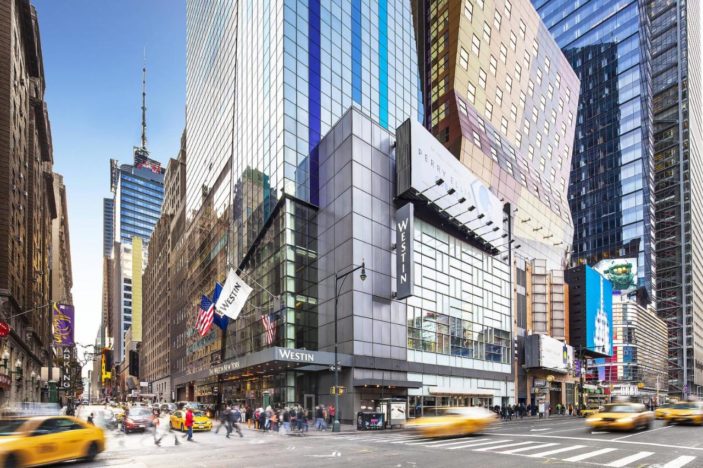 Eat at Los Tacos No.1

On the same block as the Westin – on 43rd between 7th and 8th – you’ll find one of the best spots to eat in Times Square – Los Tacos No.1.

This isn’t a new establishment – it’s been there since July 4th weekend, 2017, in the old New York Times building. But it remains one of the best kept secrets in the city – especially as it was hidden behind scaffolding when I was there earlier this month.

They’re some of the most reliably good tacos in New York, and at an affordable price (for Times Square), so you’re almost always going to find a line here – never a bad sign! And they are simply delicious.

Times Square (229 W 43rd St) was their first brick and mortar location, after their original stand at the Chelsea Markets, and now there are three other locations around the city in Tribeca, Grand Central Station and NoHo, which opened earlier this year.

Visit The Museum of Broadway

While I haven’t had the opportunity to visit the Museum yet myself – it only opened on 15th November of this month – New York’s newest museum is (incredibly) the first ever dedicated to Broadway itself. And naturally this interactive, immersive experience sits in the heart of Broadway, Times Square, sitting right next to the Lyceum Theatre on 45th Street, where A Strange Loop (which won this year’s Tony for Best Musical) is currently enjoying performances.

Here’s a look at what to expect:

And speaking of Broadway…

Well, this one goes without saying, but there are so, so many new shows happening right now in Times Square it’s hard to keep up. You’ve already missed some incredible shows this year – like Mr. Saturday Night starring Billy Crystal, the hilarious POTUS starring Vanessa Williams and Rachel Dratch and American Buffalo starring Sam Rockwell and Laurence Fishburne.

Thankfully, some of the hottest tickets of the year remain in season.

There’s the revival of The Music Man, starring Hugh Jackman and Sutton Foster, which was touted as the show to relaunch Broadway earlier this year. Given it’s been a sell out every night, we can safely say it’s been a success.

Due to popular demand, the show has been extended two more weeks and will run until January 15th at the Winter Garden Theatre. And while some aspects of the show haven’t dated terribly well, it’s a show with some of the most iconic music from the history of Broadway, and it’s a joy to witness it in the flesh – and one that’s suitable for the whole family! At the end of the show, Jackman makes a point to see how many people are at a Broadway show for the first time, and the amount of people who raised their hands was an impressive one. As he said on the night, “we hope you keep coming back for more!”

I caught the Pulitzer Prize and Tony Award winning A Strange Loop on my last visit, which is in many ways playwright Michael R. Jordan‘s one man show. Because of that, it’s unlikely to hit quite the same with a different performer or cast, so it’s a must see before it leaves on January 14th at the Lyceum Theatre. With some of the more confronting scenes Broadway has seen, this isn’t one for the kids, and honestly it’s just a pleasure to see the voice of a young, African American queer playwright get heard on Broadway, which has long been in need of diversification.

You can get tickets to both shows on Broadway Inbound, alongside all the new premieres and old favourites.

Of the shows that have premiered recently, look out for KPOP at the Circle in the Square Theatre, Some Like It Hot – based on the iconic film of the same name – which is currently in previews at the Sam S. Shubert Theatre, and officially opens on December 11th. There’s the new Tom Stoppard play Leopoldstadt, a Michael Jackson musical called MJ, that premiered at the end of last year, and you can even see Fiddler on the Roof in Yiddish! And though it opened more than a year ago, SIX The Musical also remains one of the hottest tickets on Broadway, with a recently updated cast.

If you’re on a budget, make sure you enter lotteries for your desired show – most will have digital systems in place on their official websites, that will require you to sign up the day before. You can also line up the morning of the show at the theatre box office for discounted rush tickets. You can see a handy list of all the shows and their policies on discount last minute tickets over on Playbill.

Getting to New York City from Australia

Air New Zealand now has a direct flight from Auckland to New York, as we edge ever closer to Qantas’ long promised Sydney to New York direct route, which they expect to launch by the end of 2025. Qantas will also add the Sydney-Auckland-NYC route themselves in 2023.

If you’re not flying through Auckland, you can fly through any other entry point in the US – including Los Angeles (All Airlines), Dallas (Qantas/AA), Houston (United), San Francisco (United), Honolulu (Hawaiian Airlines). From any of these destinations, you’ll easily find a direct flight to one of New York’s three main airports: LGA, JFK and EWR (Newark, NJ).

The author travelled to New York at his own expense, and stayed as the Westin New York Times Square as a guest of the hotel. With thanks to NYC & Company, Go City, RiseNY and Broadway Inbound for additional support.

Header Image: The view from our room at the Westin New York Times Square. Photo by Larry Heath.