Located in the city’s Viaduct Harbour, and set for a grand opening on 1st November 2020, the property is now accepting bookings and, from the looks of things, promises to bring more of that distinctive charm and whimsy the hotel group has become renowned for.

READ: QT Sydney is a subversive and unique five-star experience

“Expect the unexpected” remains the calling card for QT’s penchant of blending highly conceptual quirk with boutique luxury. And the hotel of 150 rooms and suites looks to interpret that in a very unique way, driven by QT’s go-to designer Nic Graham who has landed on the curious themes of oysters and oyster trawlers.

“We have blended contrast and quirk for QT Auckland as we have with each unique QT Property,” offered Graham, who specifically juxtaposes the rough and natural textures of an oyster shell with the smooth luxury of what’s inside. “The idea was onset by my first visit to Auckland and a dozen oysters – the salty sweet is a metaphor for the design, where we have elevated the bold use of colour and created a cocooning interior that uses interesting local materials and suppliers, adding to the harbour-based neighbourhood narrative of QT Auckland.”

Along with New Zealand’s natural hues, this concept includes mixed custom furniture and plenty of found objects alongside “iconic originals”. It’s an inspired design that flows through the hotel’s guest rooms, public spaces, meeting rooms, on-site restaurant and a rooftop bar. “Beauty lies within” and the theme of “discovery” will be a central narrative.

READ: QT Perth translates the wild west with a stunning sense of luxury 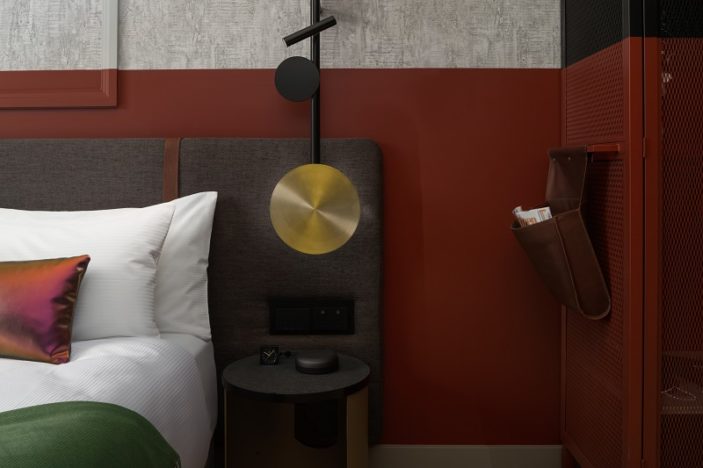 Doron Whaite brings 15 years of hospitality experience, and previous stints at both QT Sydney and QT Perth, over to the new property to serve as General Manager. QT Auckland will be a truly immersive experience,” Whaite promises. “Channelling the local neighbourhood while adding QT’s luxuriously quirky design, it’s unlike anything the Auckland hotel market has seen before.”

You can’t talk about a hotel without mentioning the dining though, and appropriately that’s going to be steered by chef Sean Connolly. The renowned chef will be overseeing the signature dining concept as well as the rooftop bar, and anyone who is familiar with Connolly’s work at Sydney mainstay The Morrison should already know how central oysters are to his work. After all, The Morrison is widely known for their yearly month-long Oyster Festival. Here’s to hoping he has a Carpetbag Steak on the menu!