Cornucopia: In Whistler, we found one of the world’s best food festivals 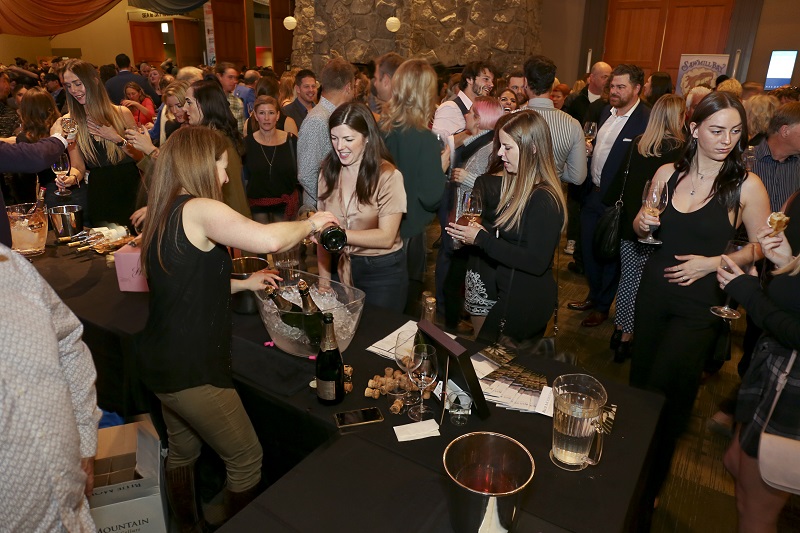 Next month Whistler Village will once again kick off one of the world’s greatest ski seasons, but in the lead up to that, it’ll transform into a veritable oasis of food and wine, highlighting the many fine restaurants and bars that make up British Columbia’s adventure capital in new and interesting ways.

Each November, this famous Canadian destination prefaces the start of its ridiculously busy ski season with almost two weeks of nothing but good food, great vibes, and even better wine. It’s called Cornucopia, and it’s been a True North tradition for more than two decades, giving Whistler’s locals and visitors a chance to fill up on the finest BC produce before all hell (good hell, snow-covered hell) breaks loose.

From a snack-filled after-hours party in a contemporary art museum, to a lively, internationally renowned oyster shucking invitational, what is most remarkable about Cornucopia is just how much they put into each event. Whistler is already one of the most playful spots in Canada, and this really takes things to the next level.

Whistler’s foremost dining institutions lead the program each year. Araxi Restaurant & Oyster Bar, and Bearfoot Bistro, are just two of the staples you’ll find popping up all over the festival each year. The latter hosts the aforementioned oyster invitational which pairs a Bloody Ceaser battle with one of the most exciting, and unexpected, mixes of oyster shucking and non-stop partying this writer never knew to expect before heading along last year.

The diversity of the event, which this year spans everything from food-filled drag performances and Warhol-inspired museum parties, to long lunches, wellness showcases, and even a sold-out Spice Girls tribute, is not lost on those who have seen Cornucopia grow over the years.

“It used to be a weekend and we did just one wine dinner”, says James Walt, Executive Chef at Araxi Restaurant & Oyster Bar. “Now, it’s well over a week and we host multiple events throughout the festival”.

“The new events have added to the diversity of the festival as it is a lot broader to appeal to a diverse audience.”

So how broad will it be? We’ve dug through this year’s exciting program and, through mounds of FOMO and regret that we won’t be making it up this year, put together a list of six unmissable events should you be heading that way in November. Remember, Whistler is pretty damn easy to get to (hello cheap shuttle from Vancouver), and it’s no longer ridiculously expensive to stay there with the new (and very, very nice – they even have ski racks) Pangea Pod Hotel in the heart of the village.

First, you need to decide whether you want to go in the first week, or the second. Cornucopia runs from 7th November straight through to the 17th, with both weeks differing greatly in events. It’s best to check out the full program HERE before you make the decision, but whatever you’re plan, it should include some of these following events.

House Party: Best of BC 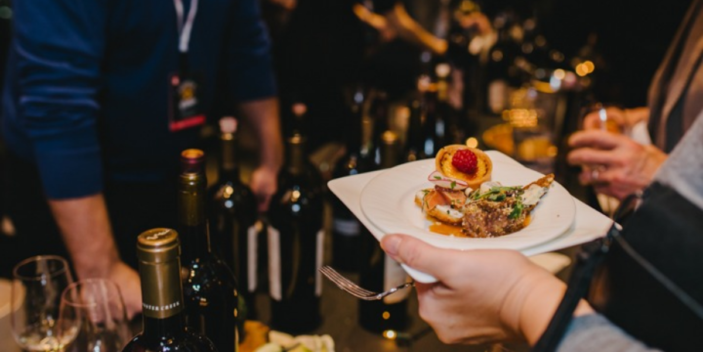 Each year Cornucopia starts off with this lively feast, where a self-server BBQ and share tables are set up in Whistler Conference Centre and complemented with various drinking sampling booths showcasing the wineries, breweries and distilleries that fuel British Columbia each day.

Think of it as the ultimate BBQ, handled by Four Seasons’ Sidecut Modern Steak+Bar with a massive spread from the grill and from the smoker, spanning salmon and smoked brisket, salads, mac n cheese, cornbread and more. There’s a reason this is a perennial sell-out, and if you’re going to really dive into the magic Cornucopia, this is your gateway. 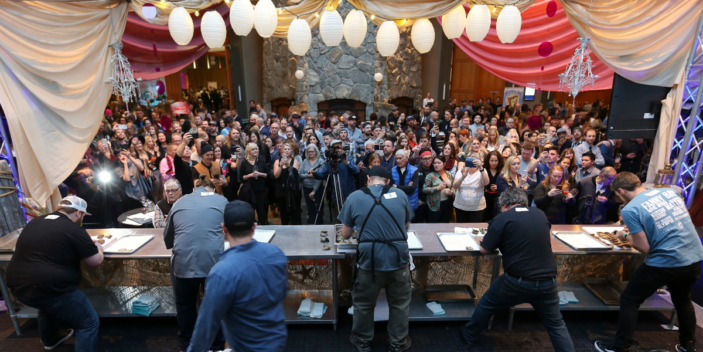 You won’t find much life in Whistler Village when sun falls in shoulder season. The weeks leading up to ski season can often feel like hibernation around these parts, which is why it’s such a shock when you step into Whistler Conference Centre and enter a world of suited-up locals watching in awe, cheering loudly as professional oyster shuckers from around the world take to the stage and pry open these huge shells. That is, of course, between thirsty sessions hopping between stalls as the best restaurants and bars offer up their own takes on the classic Bloody Caeser.

Dozens of stalls are set up in a separate part of the room, proudly showcasing different versions of Canada’s national cocktail. If you’re there in a group, debates are inevitable. Then you have numerous food vendors scattered around the venue’s main hall, all circling the stage where the loud and energetic oyster shucking battles take place. Platters of cheese, wine, craft beer, oysters, burgers – you name it, it’s all there. 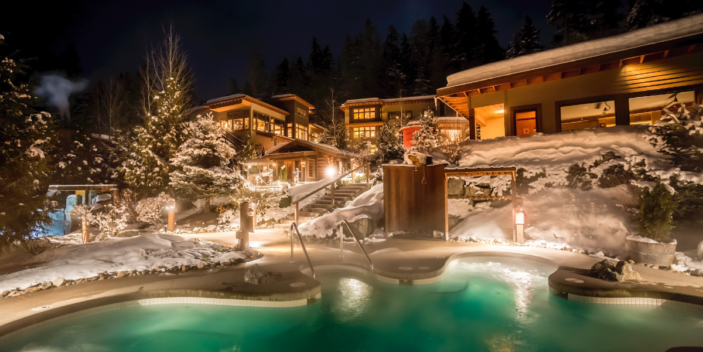 Head on out to the middle of the forest and take a dip in the baths of Scandinave Spa, Whistler’s unique blend of Canadian wilderness and Finnish tradition. For one night only, the picturesque spa complex of outdoor baths, saunas and steam rooms will be mixing up quality bubbles and high quality canapes with all that wellness. It’s probably one of the more unique things you can do during Cornucopia, and will definitely start your festival experience off on a more relaxing note.

All tickets will include exclusive hydrotherapy bath access, towels and robe rental, passed canapes from The Collective Kitchen and a personal 200 ml bottle of premium Champagne. 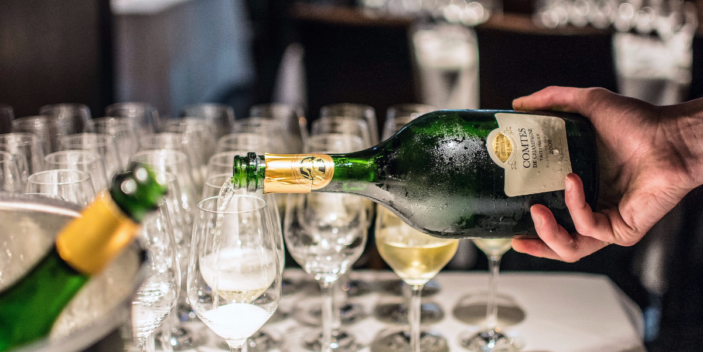 One of the definitive events of Cornucopia is always the Araxi Big Guns dinner, where one of Whistler’s most iconic restaurants crafts a special farm-to-table menu to pair with wines handpicked by Wine Director Jason Kawaguchi. As Executive Chef James Walt told the AU review last year, Araxi always start preparing for this one a few months in advance, solidifying wine parents and experimenting with pairing ideas.

“It’s a challenge that we really look forward to every year”, said Walt, reflecting on his time developing dishes and tasting pairings in preparation for the Big Guns dinner. “We get the best of the best for one special night only. Maybe I’m a little biased but it’s always the highlight and one of the most sought-after tickets at the event”. 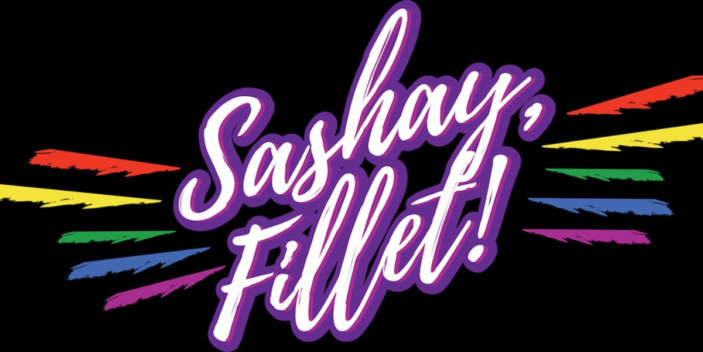 Is it a drag show? A game show? A cook-off? A party? All-in-one perhaps? We’re going with the last guess there, and knowing Cornucopia we expect this one, an inaugural event, to be absolutely huge.

Presented by Eat North, the night will mix up drag culture with food as a line-up of west coast chefs pair with a line-up of Canadian drag queens, where each duo is tasked to take to the catwalk and work in tandem through various challenges, both culinary and performance based. Although they won’t be the only ones eating, seeing as the room will be full of five different canape stations.

Oh yeah, and it’ll be hosted by personalities from RuPaul’s Drag Race and Top Chef Canada.

Last year the newbie event was the Audain Art Museum’s exciting after-hours party (which returns this year with an Andy Warhol theme), and considering how that went – epic, highly detailed, themed to a tee, and conceptual as it progressed through the gorgeous contemporary art museum – we’re betting that this will be a show-stealer for Cornucopia this year.

The Corridor with YEW and Sidecut 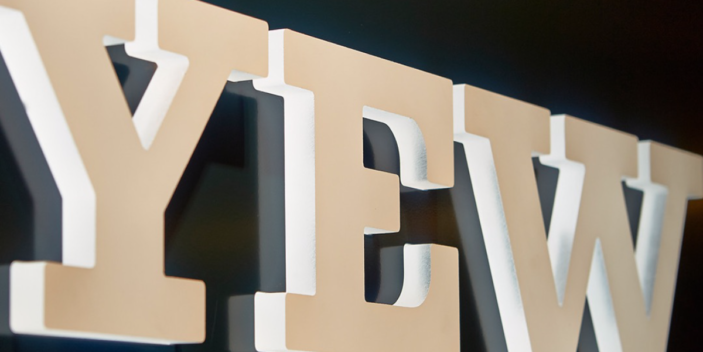 British Columbia’s iconic Sea to Sky Corridor, which stretches all the way from Horseshoe Bay to Whistler to the Pemberton Valley, will be the conceptual track for this special collaborative dinner between three local institutions. Four Seasons’ acclaimed Sidecut steakhouse will cross paths with YEW Seafood & Bar and Fort Berens Estate Winery and take guests through a culinary journey across the corridor.

This means Sidecut’s Exec. Chef Erin Guryel and YEW’s Evan Morgan will be plating up a conceptual dinner that moves from ocean to alpine, while matching wines help anchor it all in this three hour dinner.

The writer travelled to Whistler as a guest of Destination British Columbia. This is not a sponsored post and all opinions are that of the writer’s.