48 Hours in Amsterdam: Seven places you have to visit on bike in Westerpark and beyond

Armed only with an I amsterdam City Card, which provides entry into almost all of the city’s iconic attractions, free public transport, and the city’s preferred mode of transport, a bike, I set out on a 48 Hour journey around Amsterdam – in particular checking out the hip Westerpark area of the city. Along the way, I found seven destinations you need to visit while you’re in the iconic European city. 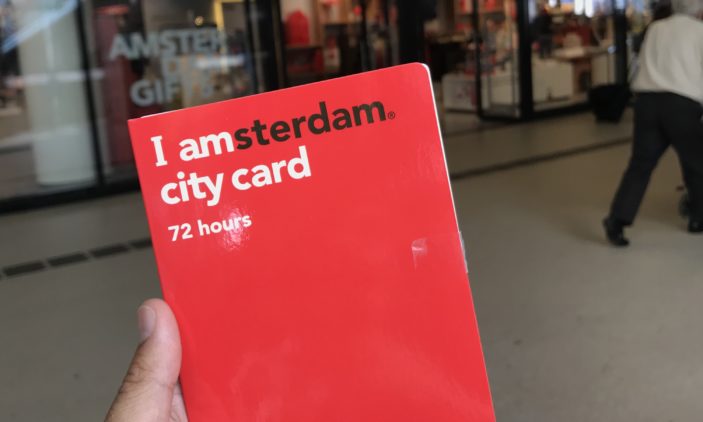 As you bike around the city, it’s hard not to look longingly at the canals, and want to jump on one on on of the cruises that are making their way through the city. So make sure you do. There are plenty of places to leave your bike near where you can board one, and the I amsterdam City Card will give you access to select canal rides. This is in addition to free entry to pretty much every attraction in town, and free public transport. 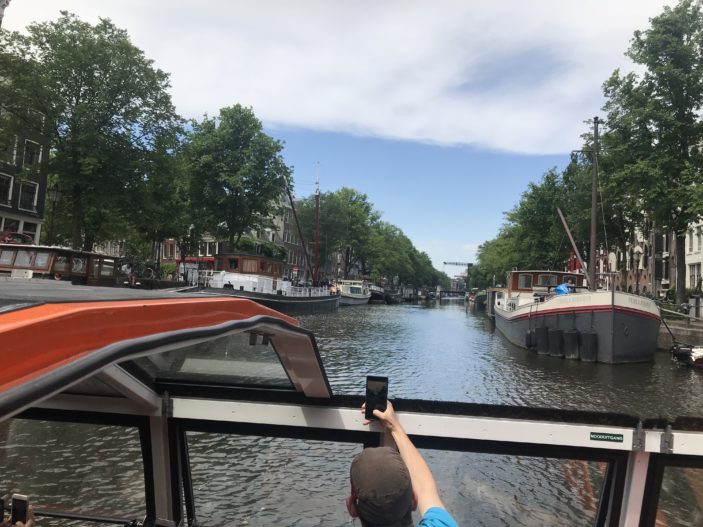 Westermarkt, one of the locations for the free cruise included with the I Amsterdam card, is a short ride away from Centraal Station – 5 to 10 minutes depending on where you’re going. There are a lot of tourism operators around there, so it’s actually quite confusing where to go – one told me I had to go back to central. In the end I found the Lovers Canal Cruises and they got me on a 1 Hour cruise with audio commentary that started and ended in front of the Anne Frank House. It was an insightful experience, that takes you to areas of the city you probably wouldn’t get to on bike, and certainly with a level of insight you wouldn’t find on your own. It was a great opportunity to meet people too!

2. Check out Brouwerij Troost in Westerpark

It took me about 7 minutes to ride to my next destination – Amsterdam’s biggest indie brewery, Brouwerij Troost. Here, they serve a wide selection of beer, and they have their own gin too. They serve traditional pub food until 1030pm in the heart of Westerpark. Burgers, tacos, ribs and such are the name of the game here, with sides from green veggies to mac and cheese and sweet potato fries. Dishes start from 11 euro, and sides from 3.75. there’s also bar snacks option – which I henceforth refer to as “the tapas of Amsterdam”. Cheese fingers (kind of like spring rolls). Bitterballen. White fish croquettes. They come standard at most bars in the city. The burgers though were stunning, and ironically, my favourite beer was the “Ozzie Pale Ale”. There’s a number of other bars in this area, which sit inside a park in the west side of Amsterdam. 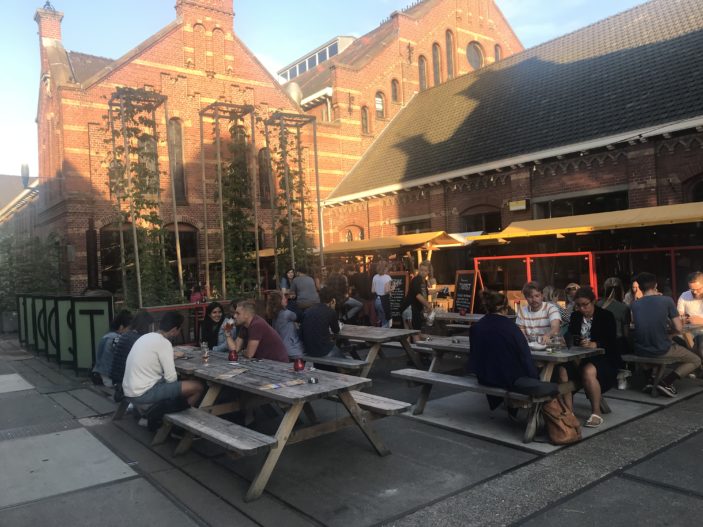 3. Get some alcoholic milkshakes at Tonton for dessert, and then play a bunch of games

A short bike ride from Troost in Westerpark is Tonton; a place where you can game the night away as you enjoy some alcoholic milkshakes. Before you get there though, I recommend taking in Westerpark on the bike – it’s a really enjoyable place to ride, and you’re able to escape the frantic nature of the bike lanes that run through the city, which often position you close to traffic, while motorised scooters and the like which seem to relish in disturbing the pedal bike experience. Always keep your wits about you, especially as the city seems to be allergic to helmets. 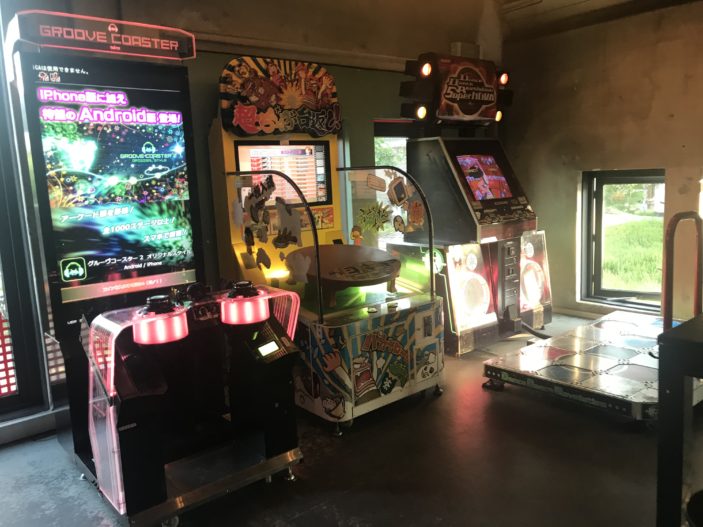 Anyway, so Tonton is filled with some ridiculous Japanese games, often without English writing. If you’re ever stuck on how to use a machine, just ask one of the friendly staff, who’ll be happy to help you out. This was a great way to finish up my first day in the city. And the milkshakes were excellent.

4. Head to the A’DAM Lookout for the highest swing in the world 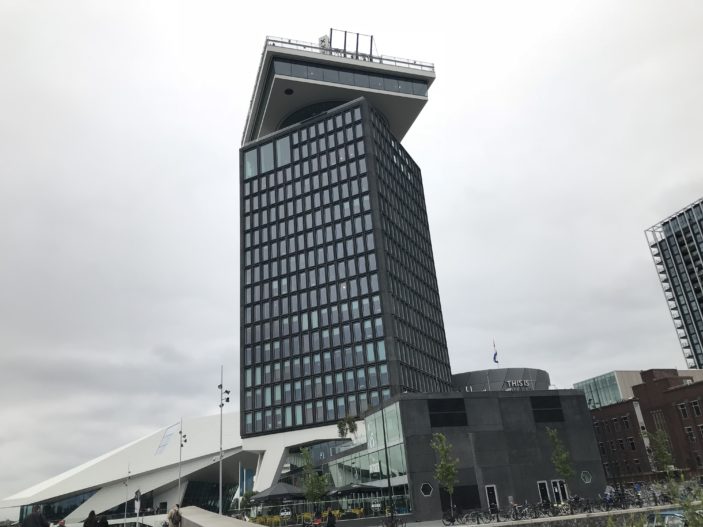 The next morning I rodemy bike back to Centraal Station from my hotel, Morgan & Mees – which took about 10 minutes – where I boarded a boat (bike in hand) to cross the water and get to the A’DAM Lookout. Here, you’ll ride an elevator to an observation deck, complete with light show; not too unlike the “Top of the Rock” experience in NYC. Though this one is only up 20 stories. Up top, in addition to incredible panoramic views, you can head to a restaurant and take a ride of “Over The Edge”, Europe’s highest swing. 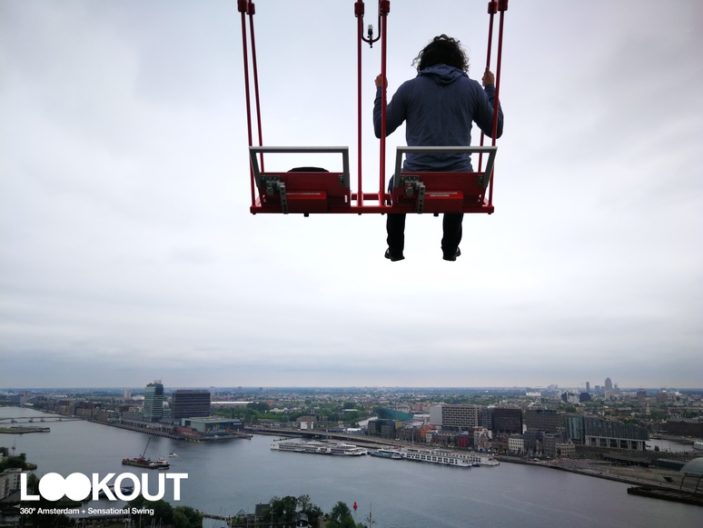 It doesn’t move very fast, but you do swing about 100m over the edge of the building, giving you a spectacular view… and I must admit, it does get the heart racing too. It costs just 5 Euros to give it a go, and up to two people can get on it at once. Head HERE for more details about that experience.

While you’re in the area, next door you can also check out the Eye Filmmuseum, a film museum like ACMI in Melbourne. Downstairs, they have a history of film which includes interactive green screens and a 360 degree screen room entitled “panorama”. Don’t miss out on a quick view before you head back over the water to continue your adventure.

Getting back on my bike after the short ferry ride back of the water, I rode to one of the most iconic, bucket list destinations in Amsterdam: The Van Gogh Museum. It took me about 15 minutes to ride there, and en route you’ll enjoy passing through other iconic buildings like the Rijksmuseum – which is also very much worth your time while in the city. With only 48 hours though, I didn’t manage to fit it in. The Van Gogh Museum is included in your I am Amsterdam card, but you can’t get tickets at the museum; you have to buy it online and in advance. They make it pretty easy to do so, however.

It’s the world’s largest collection of Van Gogh artworks (which wouldn’t surprise you), and you’ll also find other temporary exhibits there. While I was in town, an exhibit looking at the Japanese art that inspired Van Gogh was on. You’ll also enjoy some time in the gift shop and I found the overall experience at the museum to be pretty spectacular. You’ll learn a lot about him as an artist, and see, in person, paintings you’ve known your whole life.

It was time for a drink after the museum, and I rode for 20 minutes back through Westerpark to get to the Brouwerij De Prael Houthavens. De Prael is 15 years old, but this location has barely been here for 18 months – in fact the brewery is still not operational. They continue to produce it elsewhere at the moment; but by the time you read this it’s possible they’ve already kickstarted production at the new venue. While I was there, it functioned as a well designed tasting house and restaurant. 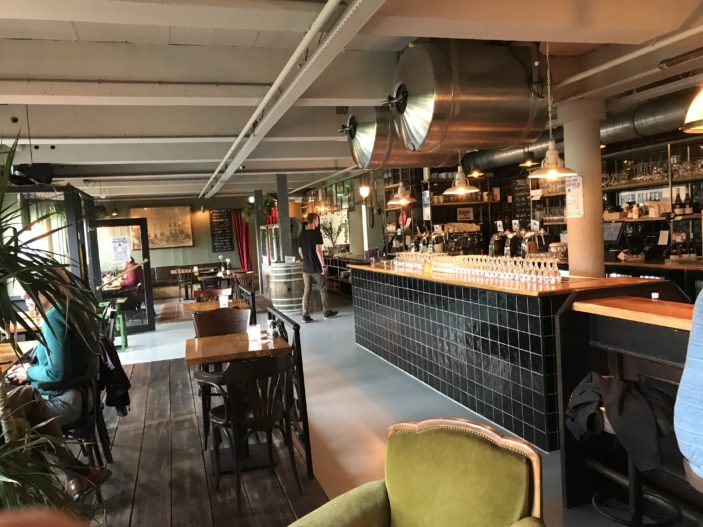 De Prael are more than this though – they’re also a social enterprise where they give people with past difficulties a chance to work. It’s been like that since day one. They produce 300k litres a year, with half sold in their own stores and half sold in others. You can enjoy collaborations with other brewers once in a while, and they offer some 20-25 varieties at any time. 10 of these beers are their staples, with the Bitter Blonde their founding beer. But what makes their mix of beers particularly interesting, is that they have the first ever beer brewed with rainwater. De Prael Hemelswater Code Blond. It’s not the best beer you’ll ever have, but it goes down very easily – and where else can you get a brew quite like that?

With a couple of drinks in my system, I rode my bike back to Centraal Station and dropped my bike back. I had a party to get to. The outdoor DOK club is a popular one in the city, and would take you about 20 minutes on bike, or 10-15 minutes on the bus, depending on traffic. Since I intended to enjoy a few more drinks, I opted to take the latter – and this was covered by the I amsterdam card.

The venue – which has been in its current location (Joan Muyskenweg 12, 1096 CJ Amsterdam) for about 3 years – holds up to 1400 people and I made it in for their monthly event “Do Not Feed The Animals”, which runs on select Sundays. It features on “beach” stage outdoors, and then an indoor stage which opened up at 5pm. A popular item at parties in the city, are balloons with laughing gas (nitrous oxide). They cost one ticket (which the people at the event humorously encouraged me to enjoy), with drinks and food also purchased using tickets. €10 will get you 3,5 in tickets – that’s enough for a delicious pita gyros, a balloon, and use of the toilets which costs ,5 ticket. For those looking for a dance and a great atmosphere, this is certainly a fun place to enjoy both.

DOK Amsterdam opens in June 2019 for the summer season.

Amsterdam is filled with places to rent bikes. I went to MacBike Bike Rental, which is located at Centraal Station – so a convenient spot if there ever was one to get yourself a bike. There’s no shortage of bike rental places throughout the city, however. Keep in mind that people in Amsterdam don’t really wear helmets. I’m sure you can get one, but I didn’t see a single person wearing a helmet the whole time I was riding. Which is surprising, but then again this is a very bike friendly city, and I was able to enjoy bike lanes on all my travels. Just make sure you keep an ear out for motorbikes which often will use the same path. 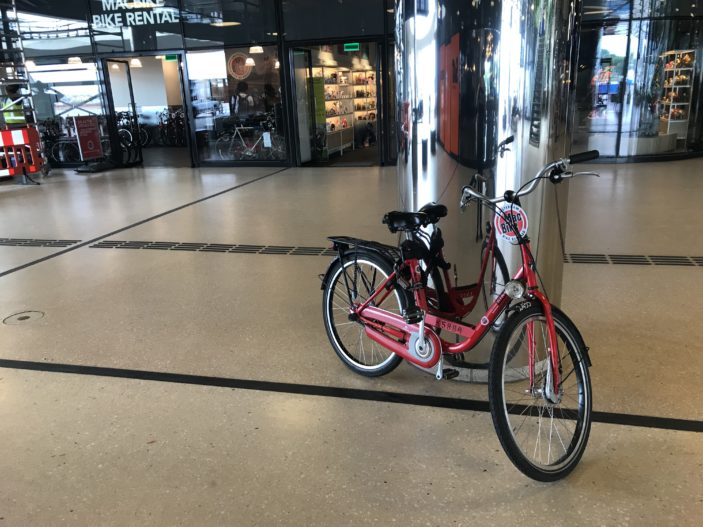 Getting into Amsterdam is generally by train or flight, with Amsterdam airport a popular point of transit for most major carriers… though consider the bus if you’re travelling from a nearby city – coming from Groningen, for example, the bus was about 7 euros versus the 25 for the train, and took roughly the same amount of time. It was a beautiful drive too.

Once I arrived at Sloterdijk Station, I jumped on the 12 tram to my Morgan & Mees hotel, it was 3 euro for 1 Hour or 7.50 for 24 hours / 48 hours is 12.50. There’s a woman in a booth on the train from whom you can buy the ticket. You’ve gotta use a bank card/ credit card to pay for it – no cash. If I wasn’t going to pick up the I amsterdam City Card, I would have gotten it for the 48 hours – that’s definitely the best deal. 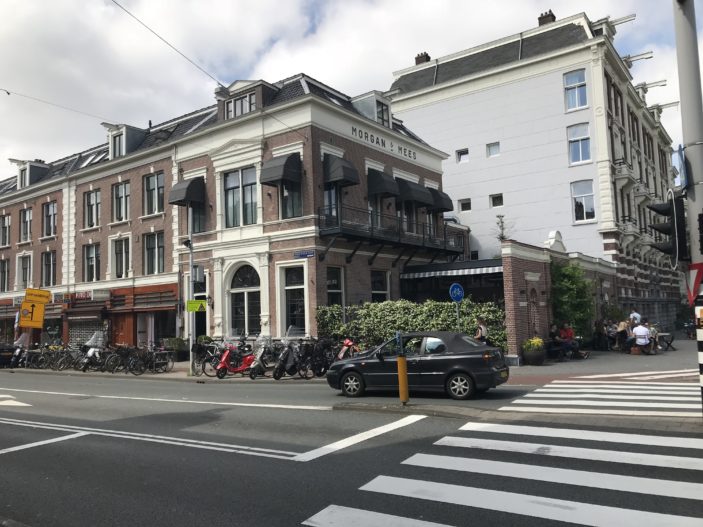 Also, if you need a place to store your luggage, there’s a drop and go a few minutes from Centraal station where you can store your backpack for the day for 7 euros… though for bigger bags it’ll cost up to 15 euros. Insanely expensive for what it is, but convenient. Especially when you’re keen to bike ride around the city without a care in the world.

To read more about the I amsterdam City Card, which provides inclusive public transport and most attractions in the city, head HERE.

The author travelled to Amsterdam with Etihad Airlines at his own expense; Amsterdam Tourism provided the I amsterdam City Card and some of the experiences listed in this article, including bike rental from MacBike at Centraal Station. Morgan & Mees (Tweede Hugo de Grootstraat 2-6, 1052 LC Amsterdam, The Netherlands) provided one night’s accommodation and some meals in their on site restaurant (which also comes recommended).

This article was originally published in August 2018, and all information was correct at the time of printing. All photos by the author, except for the photo of the author on the swing, which was provided by A’DAM Lookout.