There are plenty of kitchen gadgets on the market if you’re after quick and easy slow-cooked meals which require very little effort. Always has, always will be. But there’s something uniquely satisfying about Zega Intelligent Cookware and their nifty little (little in effort, medium in size) app-enabled pot – the currently $199 Zega Digital.

For 2021, the impressive kitchen tech was named amongst the likes of Dyson and Oral-B at Finders’ Innovation Awards, and has received hype-worthy online reviews since. Is it worth the hype? You’re damn right it is. In fact, it’s provides such a solid, effortless way of cooking one-pot meals that I’ve since convinced at least 5 other people in my life to pick one up. After all, it’s inexpensive, something new to play around with, and absolutely one of the better kitchen gadgets for anyone to add to their line-up. And I do mean everyone – if I had this on-hand when I first started cooking in a paltry studio apartment, back when I moved out of home at the age of 18, I wouldn’t have been too embarrassed to invite my mates over for dinner.

Being able to cook a meal fit enough for an entire group, in 30 minutes, is one of the main appeals of the Zega Digital. So let’s look at how it works.

The Zega Digital (there’s also an Analogue version) is designed by the same crew behind the Magic Bullet, one of the most popular and efficient blenders on the market, so there’s already a good pedigree behind the pot. Most importantly, it doesn’t necessarily represent a new way of cooking, just a more efficient, largely hands-off one.

Key to this is the design. The 5-litre pot features a double-wall construction, where the area between the two sheets of stainless steel is a thermodynamic air layer. It has been worked specifically to trap heat while the moisture inside the pot makes it like a thermos. The exceptional build can be heated on any kind of stovetop and only takes 8-10 minutes to reach ideal temperature, after which the pot can cook on its own for hours, off the stove.

Given you won’t need any gas or electricity to finish off the cooking, the Zega Digital represents a very significant energy-saving way of preparing one-pot meals like curries, soups, braised meats, and stews. The set-and-forget approach is complemented by a comprehensive companion smartphone app, which receives signals from the Bluetooth-enabled lid and lets you know when the meat is ready to eat. However, the pot can also keep the food warm for roughly 4 hours before it’s ready to serve, monitored by the thermometer that’s built into the lid.

The lit holds a rounded crown that can be removed and charged. This is where the Bluetooth technology is located. You simply remove it like Iron Man would his core, place it in a dedicated charging dock, and juice it back up. You’re looking at around 30 minutes of charging time to give you 6 hours of cooking time.

Another handy feature is a steamer pot that comes with the Zega. It can be flipped upside down and act as a grater to ingredients can be grated onto the contents of the pot with ease.

You can also think of Zega as a high-quality cooking pot, with enough capacity to handle those bigger tasks. But it’s not as if the surprisingly simple Bluetooth tech is hard to use or overwhelming at all. 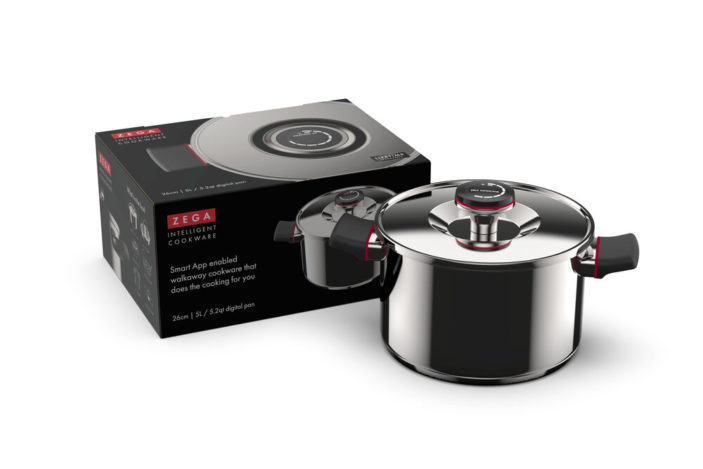 The Australian-designed Zega Digital is almost perfect. Although it depends what you’re cooking. If you’re preparing larger curries and soups in this, consider it one of the most impressive cooking gadgets you’ll ever own. Left to its own devices, the Zega Digital is able to cook beautifully even, producing plenty of flavour that goes far, far beyond the amount of effort required.

On the other hand, it’s very easy to allow heat to escape this thing, so make sure all the ingredients are in before you pop the lid on. The app features over 70 recipes for various types of proteins, with most recipes ranging from 1-1.5 hours. If you’re thinking slow-cooker, you’re right, just much quicker and more efficient. A lot of these recipes could also be made in slow-cookers, but would require a bit more attention and time.

Not that people have many places to go during lockdown right now. But theoretically, this would be most valuable for family cooks who want to introduce a bit more flexibility to their day, rather than structure it around cooking dinner that night. Heat it up, set it, leave it to go about your day, and come back to a beautifully cooked home-made meal. The convenience is worth far more than the price.

Especially now that it’s sale for $199, the Zega Digital is easily one of most valuable kitchen gadgets of the year. Although it’s not like the set-and-forget style of cooking will come in much use during lockdown, when most people can’t go very far from their house.

Consider the Zega Digital an investment that’ll find most of its value later down the track. It’ll allow you to decouple common tension between cooking dinner and going about your business. Not only that, it’ll pretty much pay for itself with power-efficiency, requiring very little use of a stovetop so both your heat plates and your hands are largely absent for much of the cooking process. The convenience is simply unparalleled for curries, soups, and stews.

Highlights: Exceptionally convenient and a genuine time-saver; power efficient way to cook; solid design; thoughtful features.
Lowlights: Might not be necessary if you already have a slow cooker.
Manufacturer: Zega Intelligent Cookware
Price: $299 (currently on sale for $199)

Product supplied by Zega for review.