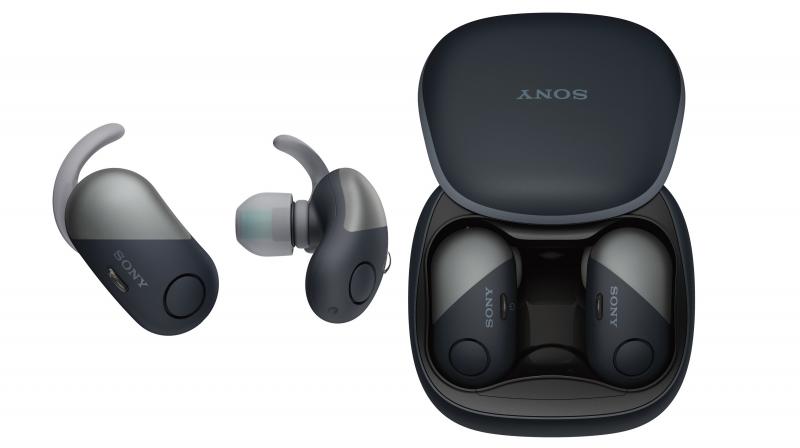 Ever since Apple released the Airpods in December of 2016, there’s been a steady increase in number of big-ticket, fully wireless ear buds coming to market. With the Internet of Things steadily spreading toward more casual adopters of technology, and Bluetooth technology improving year on year, it’s become necessary for these devices to enter the market as quickly as possible. Hence, a deluge of devices competing for consumer love, all looking to cater to many different lifestyles. Sony’s WF-SP700N is aimed squarely the sportier types, in contrast to last year’s so-so WF-1000X (names aren’t their strong suit), and finds its mark with a few smart choices, and a few concessions.

First, the design. The headphones look like fat little beetles in the hand, but are actually quite stylish when in-ear. They look like a throwback to the kind of retro-tech you’d see in a Wall Street stock photo or Star Trek episode, with a large circular moulding on each (it looks like a button but does nothing, which may confuse some users) and a small textured scratching. That small textured scratching, which feels awkward to press, is the sole input provided; on the left bud it scrolls through off/on, active noise cancelling, and ambient mode (more on those later), and on the right it’s used for playback options like pausing and skipping songs. There is no volume control function, which is annoying but understandable without adding a more intrusive controller.

The best of the design is a new arc-supporting hook that, although awkward to stuff into the smooth little container/power bank, helps for a very comfortable fit that feels natural and ensures even high-intensity workouts will prove no issue (as far as silicone-buds-falling-out-of-your-ears goes anyway).

Packaging includes a number of different sized, colour-coded tips as expected for a modern device such as this. You can play around and customise so you get the perfect fit, but unfortunately the buds’ case doesn’t get quite the same treatment as your ear. As mentioned above, the buds awkwardly enter and exit the case, which is chunky in design but quite smooth in the way it slides open. This is of little issue though, but perhaps magnetising the grooves these buds sink into, and charge from, would have been a nice idea.

The case doubles as a power bank, and when fully charged holds enough juice to fully power these buds up two times. This extends the otherwise three-hour battery (1.5 hours to full charge) life a bit, but it’s still nowhere near some of Sony’s competitors. This is a large mark against the SP700N, and makes it much more suited to those who are having brisk casual workouts as opposed to larger outdoor adventures.

Smaller issues present themselves when the buds are being used for phone calls. The left bud is the obvious master, and hence you’ll only hear the voice on the other end of the call on that bud alone. Muting the right bud during this situation also lets in a lot of outside noise, so business calls aren’t an ideal use here.

There’s also the issue of not using a USB-C as the charging cable. The buds charge when resting inside the case, with the cable connecting to the rear of the case, although the jack wants a mini USB as opposed to what’s standard with most phones now.

Performance is otherwise fantastic. Where the WF-1000X failed was its lower end, but the “EXTRA BASS” — pointedly written on the packaging in large font — seeks to remedy that with plenty of muscle behind the bass and a beautiful low-end that only occasionally falters with the highs, tweaked by 6mm drivers. A dedicated smartphone app — again, standard with modern tech — has the expected EQ so users can adjust settings and play around with the sound profile, although all these profiles are pre-made and rigid with no allowance for nuance. I found it was just better to leave the sound on the default profile, with the main styles of music I tried it out with being Jazz, Hip Hop and Soul.

An IPX4 rating is necessary for sport headphones so sweat, water and dust are not an issue and won’t at all affect the buds. The other in-action concern is the strength of Bluetooth 4.1; it works fine and is reliable for the most part, so walking won’t bring in any interference and there is great allowance for distance between the buds and your device; however high-intensity running can bring in some stutters when the phone is in your pocket. You can prioritize connection stability over sound quality via the app, but I hardly see anyone wanting to sacrifice their sound quality during high-intensity workouts just so they can own the best noise cancelling buds on the market.

It’s worth noting that an eventual update Sony has promised will optimise the buds for use with Google Assistant, so tech heads with a particular fondness for that feature should keep that in mind.

The device’s highest point is noise cancelling. Sony have been unbeatable in this department, and with the design complementing that obvious focus on drowning out noise, there’s much to like here, especially as these modes avoid any noticeable drop in quality. Even better is Ambient Mode, a separate profile which lets atmospheric noise – such as traffic, speech – in and balances it with the music. The noise from outside slides in seamlessly underneath whatever you’re listening to which is a very valuable feature for sporty types who will be using this outdoors. As far as that goes, the WF-SP700N is a major win for Sony and atones for issues with excellent value.

So should you wait for Sony to hit second-gen or pick up the sporty iteration of their first-gen fully wireless buds? That is largely dependent on what you value more. Battery life is the device’s lowest point, while sound and noise cancelling is its biggest strength. It’s going to come down for your lifestyle and the needs pertaining to that; if you’re a fan of more casual exercise with great sound then these are most definitely going to give you some great value, but if want a full-day of uninterrupted performance then you’re not going to be very happy.

Review conducted using a retail unit provided by the manufacturer.