On paper, the idea behind the Razer Core X might sound like the pinnacle of PC Gaming Master Race wank. At first blush, it seems like Razer took the PCMR drive to squeeze every last ounce of power out of one’s gaming rig, no matter the cost, and made it a physical device.

I sound like I’m talking about something rather more grandiose than a cage for an external graphics card, but I’m not. That’s what the Razer Core X is, when you get right down to it. It’s a case into which you can slot a high end graphics card, power it, and attach it to your Razer gaming laptop to give it a boost in overall visual grunt.

My review was conducted using an Nvidia GeForce GTX 1060 and the Razer Blade Stealth 13.3″ laptop we reviewed on Thursday. It did indeed give an already powerful gaming laptop a boost in performance. Frames lifted across the board, I found I could bump the overall quality settings up a tier or two without an issue in even the most graphical of games. It essentially turns the laptop into something more akin to a desktop computer. Which leads me to the obvious question:

If this kind of power is what I want, why wouldn’t I just get a desktop in the first place?

Let’s rack up the total cost of this review kit really quickly. The laptop we were sent for review comes in at $2,669 AUD, the graphics card comes in at about $450 AUD and the Razer Core X itself will set you back $469 AUD. Total cost: $3,588 AUD. You could build a monster of a desktop for that much money. Top of the line parts all the way, liquid cooling, high end monitor, you name it. Three-and-a-half grand would get you there in style. 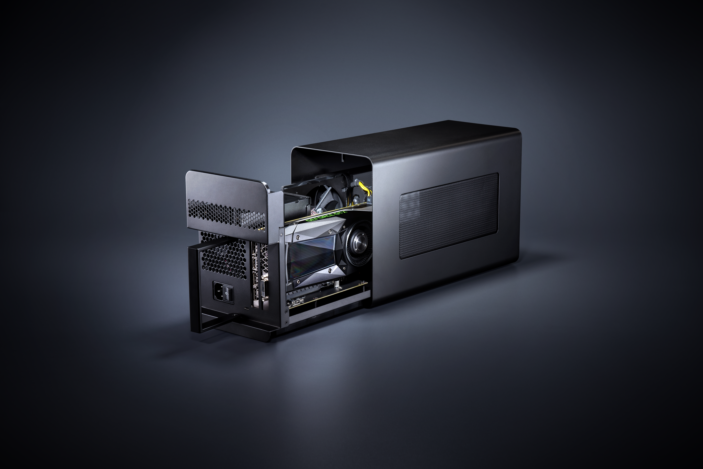 That’s the more practical side of my brain talking, and every PC gaming enthusiast I showed the Core X to asked the same question, ran the same price calculation and came to the same conclusion. So, if not the hardest core PC gaming hobbyists, what then is the market sector for the Razer Core X? Well, it seems to be people who want the power of a desktop, with portability as an option.

The setup described a few paragraphs above — Core X, Blade Stealth and a GTX 1060 — is, rather amusingly, the PC Master Race equivalent of a Nintendo Switch. You can use it at home as a powerful gaming rig and then, when you’re ready to go mobile, you can disconnect the computer from the Core X, take it with you, and still have a muscular gaming system on your person.

The Core X cage itself is made from a sturdy metal frame and features a locking handle at the rear to keep the components from sliding out or moving around while in use. The cage is large enough to handle even the most broad-shouldered of graphics cards, and its PCIe 3.0 slot will suit any major card on the market today.

The cage also runs a full 650W power supply which, again, would be more than enough to power the average desktop. You can connect your USB-C powered laptop to the Core X and charge it, but the only machines that truly take advantage of its power-boosting capabilities are the Razer Blade Stealth, Razer Blade, and Razer Blade Pro laptops with a Thunderbolt 3 connection, which is its primary power and data transfer cable.

If that versatility sounds good to you then the Razer Core X will suit you down the ground. It is a piece of kit that has been engineered with a very specific audience in mind. I think Razer’s well aware the bulk of the PC gaming audience that is their bread-and-butter will not be interested in the Core X and will, in fact, delight in poking fun at it. But for the happy few in search of a plug-and-play method of beefing up their Razer laptop at home, the Core X is exactly what they’ve been looking for.