The Logitech G512 Carbon Mechanical Keyboard is very well mannered. It has the rapid fire response times you’re looking for in a gaming keyboard, but the click from its switches as you type is minimal. This makes it a board that can do it all — you can use this as a day-to-day office board and not drive your co-workers crazy, and you can use it for fast-paced games when you clock off.

This kind of Something For Everyone approach is a pretty common theme in Logitech’s design. I’ve said before, this is a company with a reputation for creating devices that cover as many bases as possible.

Externally, its one of the more stylised devices I’ve seen Logitech produce (along with its sister mouse, the G903). It’s backlit, black keys are offset by the gunmetal grey, brushed steel look of the aluminium board beneath them. The backlight quickly cycles through a rainbow kaleidoscope by default but can be customised using Logi’s Lightsync application. The inclusion of coloured backlights alone is rather different for Logitech, who have previously favoured more subtle designs when compared to showier contemporaries like Razer and HyperX. 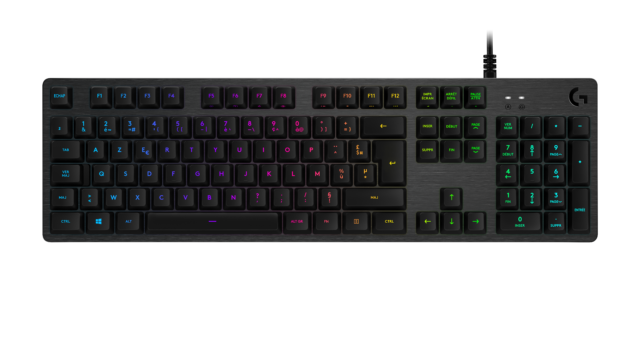 In terms of specs, the G512 is not to be sneezed at. It boasts a report rate of a low, low 1ms which will give you an edge in shooters like Fortnite and Overwatch. The source of my review board’s quieter keystrokes are its Romer-G Tactile switches, but you can also opt for a Romer-G Linear set or a GX Blues when you order should you prefer something that makes a bit more noise. There’s also an extra port on the back for USB pass through if you need to charge your phone while you play, which is a nice touch. Further, there’s programmable macros, specific game keys to control your lighting, 26 key rollover and the kind of solid anti-ghosting you’d expect in a premium tier mechanical board.

I don’t really have many complaints with this board, but that doesn’t necessarily make it super remarkable either. There’s a lot about this board that you’ll find on others, so its more Logitech’s subdued design philosophy that sets it apart. While I wouldn’t mind a wrist rest, the G512 is in every other respect a solidly crafted board. It’s hardy, its feature-rich without going overboard, you can have the key switches your way and it isn’t terribly aggressive in its aesthetic. Worth a look.

Review conducted on a G512 retail review unit provided by the manufacturer.