The soundbar has been the go-to piece of home theatre kit for people who want great sound but don’t have the room for a full surround kit. JBL’s refresh of its series of soundbars embraces this desire to save space with the succinctly named JBL BAR 3.1.

As soundbars go, the JBL 3.1 isn’t the sleekest or the prettiest one you’ve ever seen. A shade of dark grey that keeps it from completely disappearing into the scenery, it is otherwise aesthetically unobtrusive. A round-edged rectangle about a metre and a half long, the JBL 3.1 sits quite comfortably on my small entertainment unit and has a low enough profile that it doesn’t rise over the lower bezel of my 50″ Sony. I wish I had more to say about the 3.1’s aesthetic but I really don’t. It’s a fairly standard look. Despite its odd choice of grey that pairs with almost no other home theatre hardware, it is otherwise working quite hard to go unnoticed, and in that it’s mostly successful.

The subwoofer, on the hand, is big enough to blot out the sun and doesn’t care if you like it. Subtlety is not its forte. A large, black square that resembles an end table, you might have been able to get away with using it as one if its bassy wallop didn’t make it vibrate so much. This is not to suggest it will wobble around your living room or anything — far from it. The sub sat sturdily on our wood panel floors, dutifully doing its job of being an imposing boom cube. For its taciturn look, it connects wirelessly to the soundbar without delay or complaint the moment you switch it on.

The back of the soundbar features a number of input ports for HDMI, Optical and Aux. While the number of available ports was more than enough to give my Xbox One, PS4 and Nintendo Switch a home, I found them a little fiddly to interact with, especially once you’ve got a couple of devices plugged in. They just feel really close together and the bushel of HDMI cables doesn’t help. Part of this is due to the 3.1’s low profile, space is already limited and JBL do pack a lot of ports in for such a small cluster. 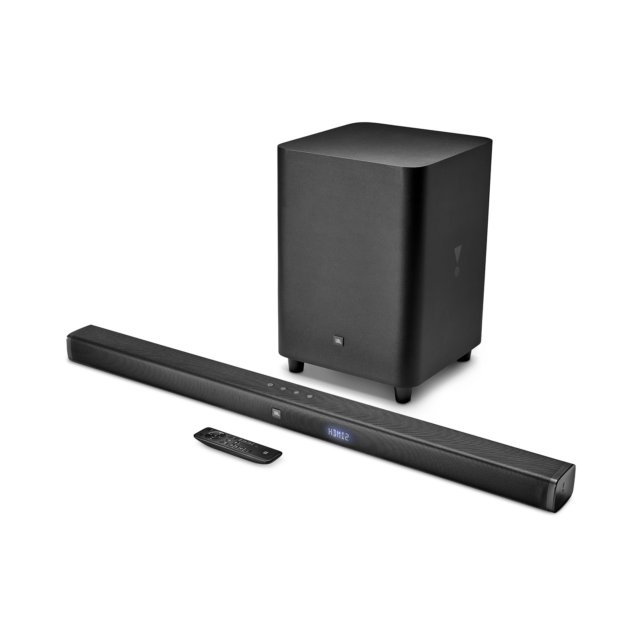 The sound though, the sound is where the 3.1 really shines. Able to conjure a reasonable facsimile of virtual surround with its 450 watts of power, the 3.1 presents a crisp, wide, well-leveled soundstage that gives you all the fizz of a good sound mix without having to give half your living room over to audio equipment. I threw a number of different sound environments at the 3.1, from dense action movies to fairly lowkey video games, and came away pleasantly surprised. It handled Star Wars: The Last Jedi and Thor: Ragnarok‘s audio mixes with flair and shifting to the rather sedate mix on the Xbox One X’s Jurassic World Evolution showed it can maintain great clarity even when the volume is fairly low. There was only one device I connected to the soundbar that caused it a bit of a headache, and that was the NES Mini Nintendo console. The NES Mini, which outputs in PCM, a format the soundbar is equipped to handle, seemed to trip the JBL 3.1 up with the analogue sound coming through in fits and spurts. This is a pretty rare case, nothing else I tried had this result, but it did crop up and you should know about it.

The best word I can think of to describe the JBL 3.1 soundbar is “reasonable.” It’s reasonably priced, it’s (mostly) reasonably designed and its sound output is very reasonable for its price range and class. A fantastic option for those who live in city apartments or small homes, but those with more space or a larger budget could easily move up to the 5.1 option. Well worth a look.