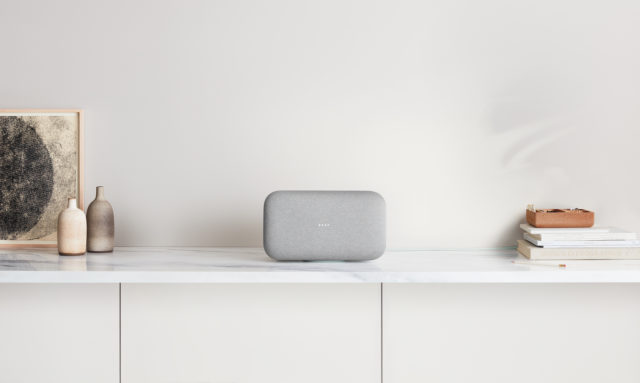 The Google Home Max is, in this reviewer’s opinion, the best sounding standalone smart speaker on the market. That’s an arguable point of course, but after weeks spent trying this imposing device with various styles of music (and a few podcasts) it is becoming increasingly difficult to avoid going full cheerleader mode over its performance. No smart speaker I’ve heard to date can outperform Max (at least when considered as a single unit), although that’s no wonder given the size, software and hardware behind this.

Max is a hefty boy at 33.7cm wide, 19cm tall and 15.4cm deep, but his size is softened by elegant design consistent with Google‘s previous speakers. His face is a blanket charcoal (or chalk) gray grille cloth made from acoustically transparent fabric, while the smoothed rear is white matte plastic. Max doesn’t have the flamboyant character of some of his peers, but he doesn’t seem to mind — he easily brushes past them to fit in with modern design aesthetics, seamlessly blending into his surrounds without garish showmanship. The soft edged and gentle look reminds of Bang & Olufsen, sporting that premium Scandinavian aesthetic that’s rarely replicated outside of the high-end price range.

At 5.3kg pounds, the speaker is slightly lighter than its closest competitors, those being the equally powerful Sonos Play:5 at roughly 6.3kg and the Bose SoundTouch 30 at around 8.3kg. It’s quite a weighty option when compared to a more affordable alternative like a pair of Sonos Ones (which should provide similar heft in terms of sound quality). It’s best served as a stationary commander in a larger Google sound ecosystem rather than moved about the house. Unfortunately, during my time with Max, I owned no other Google speakers for him to play around with.

Max will take up space no matter how you orient him, but somehow still seems modest given its size and pro performance. It can be oriented vertically or horizontally, protected by a magnetic silicone base — a nice touch from the design team that isn’t so small it could be easily lost. Functionality remains the same in either orientation, meaning the way you orient Max depends on where he’s going to live. This is in no way designed to be a portable speaker and even though it sounds fine outdoors, I wouldn’t be using this anywhere other than at home. 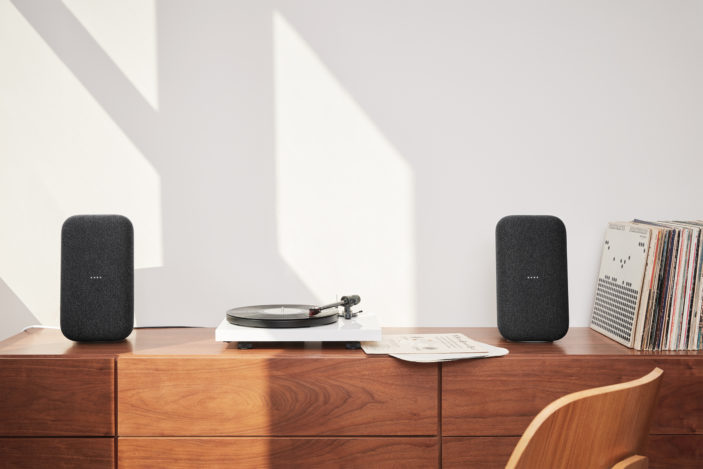 I certainly wouldn’t bring him to parties due to the lack of powerful bass (assuming no EQ is applied), due presumably to the device’s more natural sonic profile, one that puts an equal emphasis on vocals and instrumentation so “softer” genres like soul, jazz and R&B sound rich and vibrant. That said, songs like “Superthug” by N.O.R.E, with it’s dense, booming beat and thick woodwind notes, and “Idioteque” by Radiohead, do give the woofer quite a showcase. The only style that doesn’t sound as good coming from Max is the more sporadic form of electronica, like “La Rock 01” by Vitalic. The support for high-fidelity file types certainly helps, so if you have access to FLAC, LPCM and HE-AAC you can make the most of Max’s sound signature and truly justify the price.

EQ settings are buried in the Google Home app, with more of a focus on the assistant’s functionality (like its integration into a “Smart Home”). While there may not be much priority placed on customising the sound profile, there’s still a way to adjust aspects of Max’s sound, although this is hardly necessary given the AI-powered “Smart Sound” that Google is so proud of. This basically means that the speaker can adapt to its environment using an active algorithm and six onboard microphones, constantly tuning itself based on position and environmental cues. The promise here is that it only takes mere seconds for the Smart Sound to kick in if you decide to move Max to a different position, but the changes are so subtle (unless you’re home is very eccentric) that there is few ways to actually test this. Regardless, Max’s sound is consistently balanced across all levels, powered by two 18mm custom tweeters and two 114mm high-excursion dual voice-coil woofers.

Those aformentioned six onboard microphones sit under the hood, included for precise far-field voice control that works like a charm with the ultra responsive Google Assistant, even when at full volume. A nice accidental example: I posted an Instagram story (shameless plug) of me softly telling Max to “play some Miles Davis” and, around an hour later, played that particular slide back on my phone in an adjacent room (with the door open). Google heard it from the phone and suddenly my ears were once again full of the soulful sounds of Miles Davis.

Max’s remaining design features include the heaven-sent use of USB-C input, welcome 3.5mm AUX input (just for added versatility), and the lovely playback controls on the top (assuming horizontal orientation) which merely need a sliding gesture for precise control over the volume. Also included on the responsive panel, which has no texture to keep with the smooth aesthetic, is a central play/pause button that just needs a soft tap.

It helps that Google Assistant is the most well-rounded of its peers, and from my experience makes the least amount of mistakes. Max pulls from all the major streaming services rapidly, prompted by just a few words even when spoken at a very soft tone (or coming from another device as evidenced above). The process of tagging your specific speech pattern to your Google account and differentiating that from another voice is seamless as well, so different people can be talking to Max and have their voice associated with certain playlists or the like.

And smart it most certainly is. Before I was given this speaker as a loan to test out, I was told that I could simply describe an album cover or mumble a song’s lyrics and still have Google Assistant easily find the right track – tried and tested. Forgiving a few hiccups, Google Assistant is intelligent enough to pull together even the most vague commands to access all its smart home capabilities such as quick Google searches and controlling other smart devices. Asking for the news each morning is simple, as is pulling up a recipe which is then read back in a logical format. For example Max will pull a step-by-step for lasagne from taste.com.au and ask you if you want to skip straight to the cooking or also prepare the ingredients; asking for the former leads you into a system whereby Google Assistant is telling you the first ingredient and then waiting patiently for you to say “next” until going on to the second. Asking it to perform multiple functions at once also works quite well, so you could tell Max to first lower the volume to 30% before reading the news and it will do so in quick succession.

Placing equal emphasis on the speaker’s smart capability and the actual performance which is loud, balanced and flexible, Google have successfully pushed Max to the top of the line. If you’ve got the cash set aside then by all means, add this to your smart home set up as soon as possible.

Highlights: Uniformly excellent sound at all levels with very few exceptions; ultra responsive Google Assistant which can hear you clearly over the music at any volume; endearing minimal design that looks appropriately high-end no matter where it’s positioned in the house; AUX input adds plenty of options; Smart Sound seems to work well.
Lowlights: Limited EQ options on the app in case you wanted it to be punchier for a party; still quite pricey even when considering it’s value.
Manufacturer: Google
Price: $549 AUD
Available: Now