SteelSeries is no stranger to crafting premium gaming products in all areas, from handsets and gaming mice, to a wide range of gaming keyboards for a number of users and preferences. The Apex Mini Pro feels fantastic, and it without a doubt one of the better 60% keyboards in the market today. The premium price point will mostly drive causal gamers away, or those who are looking for a more robust experience that features a dedicated number pad and directional keys, which I now realise, I use more regularly than I thought. That being said, the inclusion of OmniPoint 2.0 adjustable switches, dual actuation keys, SteelSeries GG app and a generally solid build quality, it’s quite hard to pass up.

Much like many of the competing 60% form factor keyboards, it’s admittedly tough to throw anything interesting in terms of design at gamers that would draw them in for the sake of looks alone. The slim, black design is minimal and unassuming, while various RGB effects do their best to spruce up the keys. 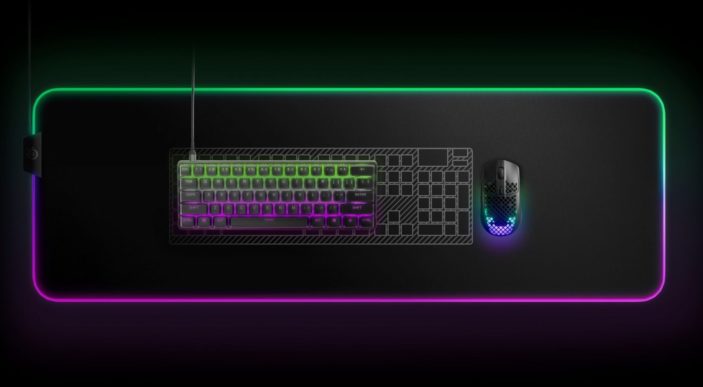 However, the true value of the Apex Pro Mini’s design lies in its build quality. Made from Series 5000 aircraft-grade aluminium alloy, to say this thing is solid would be an understatement. It bears a tangible sense of weight and durability, ridding the keyboard of any bends and creaks both the keys and frame might be subject to on any other keyboard. It does weigh in at 610g, which is a little on the heavier side, but it wouldn’t be fair to criticise it for its portable nature, given that is not the intent. That being said, if you’re after something a little lighter, a wireless version of the Apex Mini Pro is available, which weighs in at just 543g.

Thanks to SteelSeries OmniPoint 2.0 adjustable mechanical switches, initially featured in the Apex Pro, each key can be tweaked to adjust the sensitivity of each key depending on your preference. It’s a feature most wouldn’t really consider as important; until you’ve tried it for yourself. I wouldn’t say it’s impossible to go back to a standard mechanical keyboard, but it’s definitely a step in the right direction, considering other brands and keyboards like the Razer Huntsman Mini Analog are also running in the same path. The ability to finetune the sensitive for each key between 0.2mm and 3.8mm, and will heavily rely on the games and experiences you prefer. I tend to play first person shooters, and therefore shortened the travel time of harder to reach keys, which would only require a single and slight tap. Too often to I miss commands on harder to reach keys simply because I didn’t press a key hard enough, or missed the key square-and-centre. 2-in-1 action keys also make it super handy for assigning multiple combinations to a single key; press your sprint key half way down to walk, or down fully to sprint. Groovy. 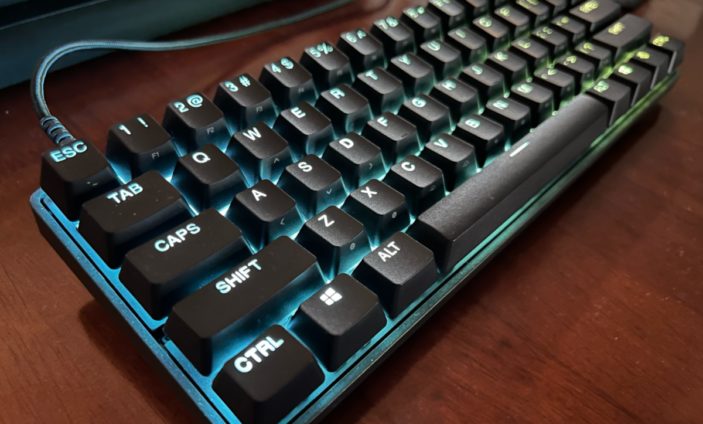 Besides this, most keys are also bound to dual-functions, which is admittedly essential, given the 60% for factor. That being said, the lack of directional keys sees them bound to W,S, A and D. I have never dabbled in the smaller keyboard space as I have always resorted to a dedicated numeric pad and directional keys, particularly when typing. The need to quickly snap between certain letters in a word with the directional keys has always come in handy for me. As I’m typing this review, I’ve had to grab the mouse and point to specific spaces and letters which need adjusting, which does wear my patience thin after a while. I can’t complain too much, as this is a gaming keyboard, but considering those directional buttons remain in other 60% form factor keyboards like the slightly larger HyperX Alloy Origins 65, it’s something I personally miss, purely based on versatility as I frequently switch between gaming and typing.

Overall, the keys included here are linear and swift, with a standard response time set right in the middle at 1.8mm. The keys themselves are solid and robust, and while not on the quiet side, but nowhere near as loud as something like Logitech’s Blue clicky switches.

Like other SteelSeries gaming peripherals, the ever-reliable SteelSeries GG app is here to allow virtually endless customisations options, from RGB lighting, to assigning key functions and sensitivity. There’s not too much to cover though, as fans of the app will find it works here in very much the same way as it would with any other SteelSeries keyboards with similar functions.

The real draw here finetuning those sweet OmniPoint 2.0 adjustable switches, which adapt on the fly and can be customised with a convenient slider, showing you the exact travel distance for each key. The ability to also assign these customisation options to multiple pre-set configurations makes it  a breeze to switch between profiles when you’re delving into different genres of games or personally crafted control schemes., complete with their own RGB setups, macros and OmniPoint switch settings.

My personal gripes aside, this is still an outstanding keyboard. From the premium build quality to the OmniPoint 2.0 adjustable switches, you’d be hard-pressed to find a 60% form factor keyboard the feels better on the fingers and more reliable for a multitude of gaming experiences and preferences. Aspects like the bland design feel inevitable for a compact keyboard that’s dedicated to function and space more so than flashy looks. But the customisable RGB effects will undoubtedly add some flare to your setup.

The premium price point may send some casual gamers the other way, but it’s nice to see SteelSeries broadening their horizons and throwing some nifty features into more of their newer products as they launch. If you’re into smaller keyboards and looking for a more premium option, it might just be the one for you.

Review based on unit supplied by SteelSeries.