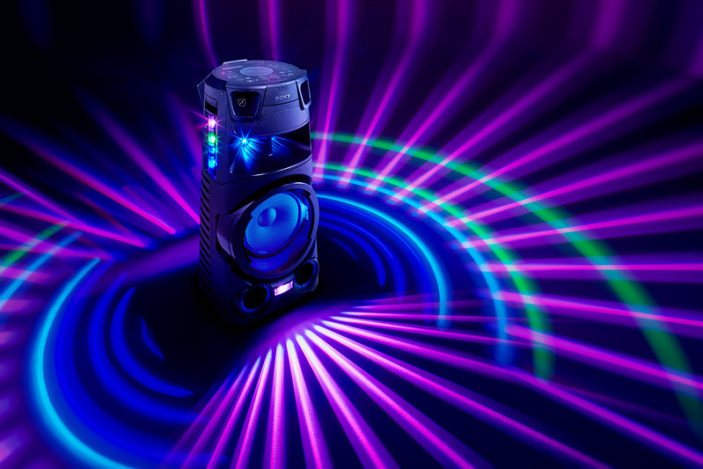 Geared towards creating big high-powered sound stages in the home environment, as well as nodding heavily to self-styled karaoke sessions, the MHC-V73D, MHC-V43D and MHC-V13 represent a wider variety in the successful series of one-box styled systems.

The inclusion of new built-in microphone holders as a major design feature doubles down on the popularity of this series amongst people who like to host karaoke sessions. The build has also been slightly tweaked towards a small footprint, and increased portability.

The higher-end MHC-V73D boasts four tweeters at the front and rear to elevate its audio profile while midrange sound comes from both the front and back of the speaker. The idea is a more expansive and immersive sound stage, with improved clarity and mid-range frequencies.

Sony has said its refined “Omnidirectional Party Sound” is the result of combining the front and rear tweeters with the midrange, woofer and a powerful jet bass booster to help propel music further and wider.

The V73D also sends out waves of deep and sky blue, green, and multi-coloured strobe lighting as part of the “Omnidirectional Party Light” system, recreating the atmosphere of an indoor nightclub along with a new animation program to create dynamic patterns.

That rather grand lighting stage is lowered somewhat in the less expensive V13 model, which instead has a multi-coloured woofer light, while the V73D and mid-tier V43D have both woofer and midrange lights with a deep blue colour. An ambient lighting mode has been included on all three models to ensure less seams when transitioning from “party mode” to “non-party mode”.

The party atmosphere also lends itself to karaoke sessions. Both the V73D and V43D boast a new DSP reverb module in the “Microphone Echo” feature, which blends vocals with background music to smoothen performances and mirror the feeling of singing in a large concert hall.

All three models also have three different guitar modes for those who want to add to their next garage band jam sesh.