If you want the concise verdict on Sony’s recently released SRS-XB31 Bluetooth speaker then all you need to know is that they’ve taken last year’s well-reviewed SRS-XB30 and given it some noticeable improvements with better design, punchier bass, and a more comprehensive range of light patterns. It’s mostly as simple as that, sitting in the middle of Sony’s new-gen Bluetooth speaker range (that also includes the smaller SRS-XB21 and larger XB41), shying away from trendy smart home integration to keep the price down and focus on performance.

The party speaker is geared for millennials with a great sound profile that should make it very suitable for social settings, particularly for those which demand chunkier styles of music like hip hop, grime and electronica. In terms of how it sounds, the XB31 is impressive at all ranges but perhaps a bit muddy when it dips low or when the bass is too dense, causing the mids to retract and toppling the otherwise balanced sound signature, on which is driven by dual 48mm speakers and Sony’s S-Master amp.

Bass is the single most important factor here – the packaging does read “EXTRA BASS” after all – although the XB31 doesn’t come up a single toggle button to turn the bass enhancement on and off, like with the previous model; instead you are to toggle the marquee feature – along with all other EQ – on the Sony Music Center app, or by pressing the Volume Down and Play buttons simultaneously for a few seconds.

Sony’s Music Center app certainly doesn’t have the most nuanced EQ, but there’s a few distinctive pre-made profiles designed to bring out different angles to the sound. Those wanting to up some of the mids without sacrificing the bass will want to play around with the “Live Sound” setting, but other than that most people will probably find themselves leaving it on the standard profile, just with the “EXTRA BASS” turned on. The “Live” function is most valuable if you want the mids to stand out a bit more, otherwise there’s more than enough immersion in standard mode, thanks to the angled speakers which work with onboard DSP to extend the reach. 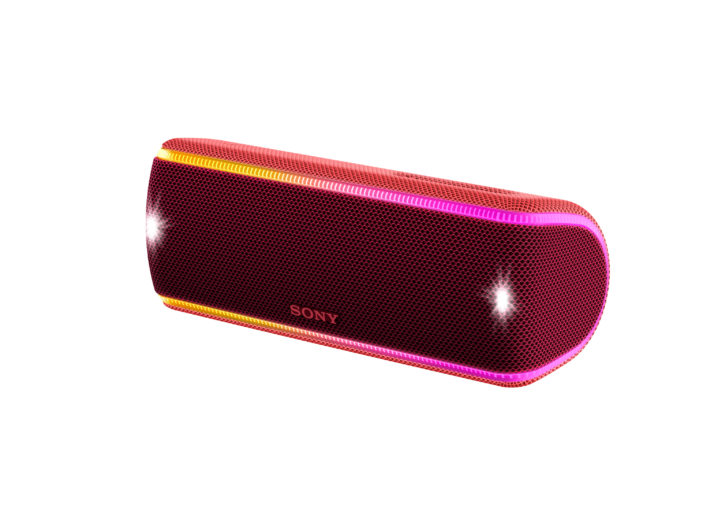 A mode you may want to switch between is the lighting function, another defining feature of the speaker where the edges around the grille give off a – sometimes obnoxious – strobing effect, despite not being completely synchronised with the music the majority of the time. That being said, the colour patterns are rather eye-catching and mostly inoffensive, up until the point where it starts to feel like a gimmick (probably because it is). But to be fair, I wasn’t using this at a party with first-year university students, I was mostly using this by myself eating spaghetti. Those who don’t like the lights can simply hold down the “BATT/LIGHT” button that’s found inside the plastic cap on the speaker’s rear to turn the function off, and those who want some softer or crazier patterns also have several different light profiles available on the app.

While lights are fun, they are not the most playful feature of the speaker; that goes to “Party Booster” (toggled by holding both volume buttons down for a few seconds). With this mode turned on, anyone can add small sound effects to the music by treating the speaker like a mini-drum and tapping it on different areas. We’re talking a cowbell here, a kick drum there, even a cheeky snare – the harder the tap, the louder the sound. While it’s not a full on production pad with nuance and purpose, it’s a good party trick for this model’s target audience.

A Micro USB is used as opposed to last year’s proprietary charging cable, which is definitely an improvement but I really question the oversight to not just make this USB-C connected to keep up with competitors. Although a neat feature in terms of connectivity has the speaker acting as a power bank for any desperate phone-charging you want to do, at the expense of the promised 24 hour battery life. Don’t take that 24 hours as gospel though; that impressive number is only reserved for the speaker with lights off and no additional sound mode; if you’ve kept the “EXTRA BASS” on you can expect 4-6 hours, and even less if you’re coupling this with the light show.

Sony have managed an IP67 rating for this device, which means its reasonably rust, water and dust proof in case you’re planning any late night beach parties. Although the design is highly textured, so water droplets won’t exactly run right off it, and officially products with this rating only withstand water immersion between 15cm and 1 meter for around 30 minutes.

As with most modern Bluetooth devices, it’s made to link up with compatible models to create an entire ecosystem, to which the XB31 slots in quite well; holding it’s own with bass even when playing with larger models. As with all ecosystems, it’s an expensive investment, but if you’re already locked in with Sony then this is a fine addition to the chain, especially if it includes the beefier XB41. The only slight annoyance here is actually linking them together, having to use the app rather than physical buttons on the device. 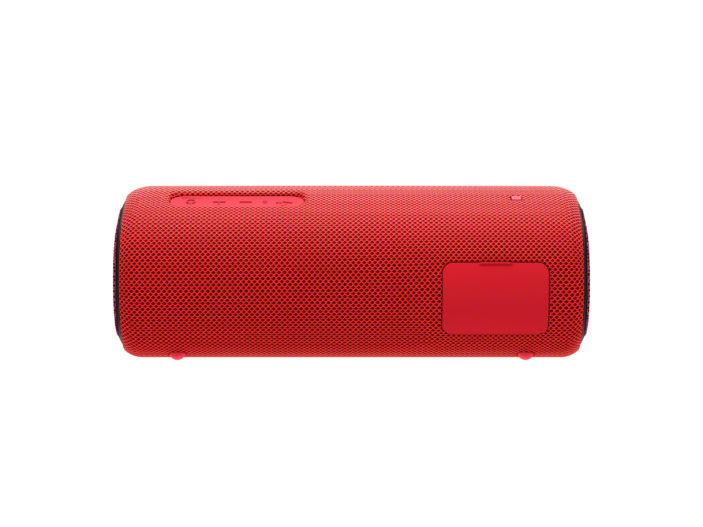 The way the speaker interacts with your smartphone is as expected; you simply hold down the Play button on the top to activate either Siri or Google Assistant, whom can hear you loud and clear thanks the speaker’s built-in mic (which is also nice for taking calls). The device also uses Bluetooth version 4.2, so connection should be of no issue and if there are drops they would be very minimal.

Overall, it’s not hard to recommend the XB31 to anyone looking to for a Bluetooth speaker well-equipped for social settings, the music of which will most likely make good use of the substantial bass boost. Of course, if you want louder you’ll have to look at the larger and more expensive models, but for what it is, this medium sized speaker does the job very well.