Philips All-In-One Cooker Review: The virtue of saving time and space in the kitchen 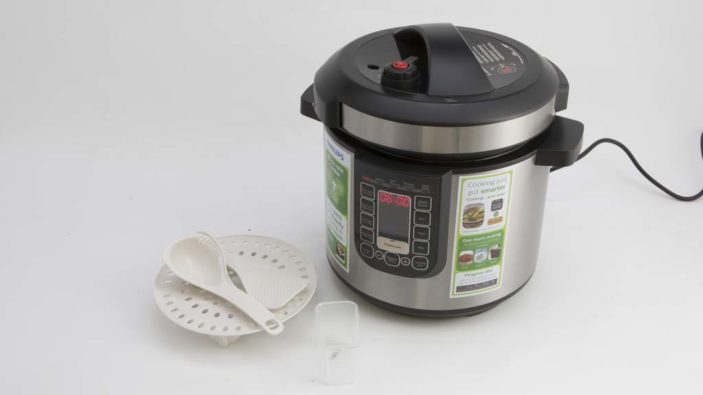 Saving time in the kitchen has always been a matter of carefully buying the right products, but having a device that saves space as well can profoundly change the way you navigate and engage with your food at home.

The Philips All-In-One Cooker is such a device that consolidates many of your kitchen appliances into one. And that’s nothing new, really. Multicookers have been around forever, but the difference is always in how efficiently and effectively the device in question balances all those tasks. As it stands, this all-in-one from Philips is at the top of its category, and that’s considering price, performance, and design. It’s been around for quite a few years now, but the fact that it can still outperform a lot of competing names is a strong mark in the favour of the reliable brand.

That rusty old slow cooker, questionable pressure cooker, and finicky rice cooker can go. Philips has designed this multicooker with 8-litres of capacity (although honestly, I’d cap it at 6 to be safe), offering plenty of muscle when it comes to preparing those larger feasts for the family or a dinner party. And being able to replace at least 3 devices with one is something worth celebrating.

Philips rate this all-in-one cooker for meals that can feed up to 14 people at a time – ambitious surely, but it doesn’t seem far from the mark. Now I’ve only used this all-in-cooker to prepare a meal for 5 people, so can’t speak any further to the capacity. I don’t doubt it, though.

There’s nothing too special about the plain design, just that it won’t look out of place amongst your regular pots and pans. And while it is quite large, it doesn’t have the same heft as the awkwardly large Airfryer XXL which Philips makes. You’ll most likely want to make sure there’s sufficient cupboard space before you trot out and grab one of these from your local retailer.

Philips has been smart with the design here. The inner pot is easy to clean and the entire machine wipes down easily. That’s essential if you’re going to be using this multicooker to prepare more than just the main course, making the idea of using just this one pot to direct an entire dinner party all the more attractive. Throw in those lamb shanks and do your best, then wipe it down and get to use to baking function for dessert. This is where being able to clean this one-pot wonder quickly comes most in handy.

With 20 preset cooking programs, touting standards like risotto and duck, it’s easy to follow along with the recipe book that Philips include with the all-in-one cooker. And that’s what I advise you to do, even if you fancy yourself someone who knows their way around the culinary arts. It’s worth taking the time and really getting used to the many functions this flexible device can perform, and the recipes have been designs especially to showcase every single aspect of the cooker. The saute and sauce thickening functions are likely going to get some of the most use, especially if you’re going to be using this to easily prepare soups during winter.

The recipe that best shows off the cooker is perhaps the sticky date pudding. This isn’t the first multicooker that promises baking prowess, but it’s the finest I’ve managed to get hands-on with. Aside from some small prep with the dates outside of the pot, you can bake the entire thing in the all-in-one cooker, and it took me under 10 minutes to have it ready. This is testament to just how well Philips has calibrated the different modes; in those case, that’s bake mode. And it’s as simple as throwing the ingredients in and pressing a button.

If you’re getting into cooking in batches and preparing meals in advance, and you don’t mind eating the same thing multiple times throughout the week, then the all-in-one cooker just makes sense. Perfect sense actually. If you aren’t lucky enough to find one on sale – you will be, don’t worry – you’re looking at a full retail price of $349. You’d easily spend that much on a few dinners out with some reasonably priced wine thrown in; sacrifice a few of those and you can have an appliance that’ll help you prepare satisfying and substantial home meals for years while also saving big on time and space. Short of forking out about 3-times more for a Thermomix, this one’s a no-brainer.