Every now and again a specific kitchen essential rises in ranks, sitting comfortably at the end of frenzied shopping queues and rushed online orders. The awkwardly pear-shaped airfryer is having such a moment right now, and despite aesthetically being the George Costanza of kitchen tools, the hype has been well-placed.

Aldi recently put a budget airfryer on the market, and irresponsibly attracted large amounts of shoppers ignoring the need for social distancing. Just type “Airfryer” on YouTube and you’ll meet dozens of results for creative air-fried recipes, only recently uploaded to capitalise on the growing trend. The craze is real, and yes, you probably do need one.

And though many would trust a cheapo from Aldi, it’s always best to look around for the most reliable so that you aren’t looking for a replacement, or throwing it against a wall, anytime soon. The portly and pricey Philips XXL seems to fill that void, but is $500 too much to fork out for something like this?

First it’s important to understand what an airfryer actually does before you decide on its value. It’s a large, space-hogging machine that uses hot air to cook your food, essentially. It’s similar to a convection oven. You simply place what you want to cook in a fryer-style basket, insert it into the airfryer, and the machine circulates hot air (by way of a fan) around a small chamber. But it’s efficiency will put your oven to shame. The other major pro is that it can achieve similar results to deep-frying without the use of excessive oil, giving you a healthier crisp.

That’s the idea anyway, and from my experience it’s more or less accurate. Whatever you pull out of the airfryer tastes good, it’s super convenient to have, and I wish these things were around when I lived at university in a studio apartment with no actual kitchen outside of a tiny bar fridge and cheap microwave. I would have eaten much more than just packet Alfredo and Mi Goreng everyday.

As mentioned above, this thing is bulky. It has to be in order to do its job properly, so you should forgive the wide curves and the fact that this thing takes up more counter space than anyone should be comfortable with. Still, Philips has tried its best at atoning for the unattractive shape with a glossy jet black body that’s smooth in all the right places.

The typical Philips logo is dead-centre on the front of the device, right on the top. Directly under that is the panel where all the magic (ie, programming) happens. Small lettering proudly reads “Fat removal technology,” referring to the Twin Turbostar technology which removes 70-90% of fats from food and drips them down from the basket to a pan. 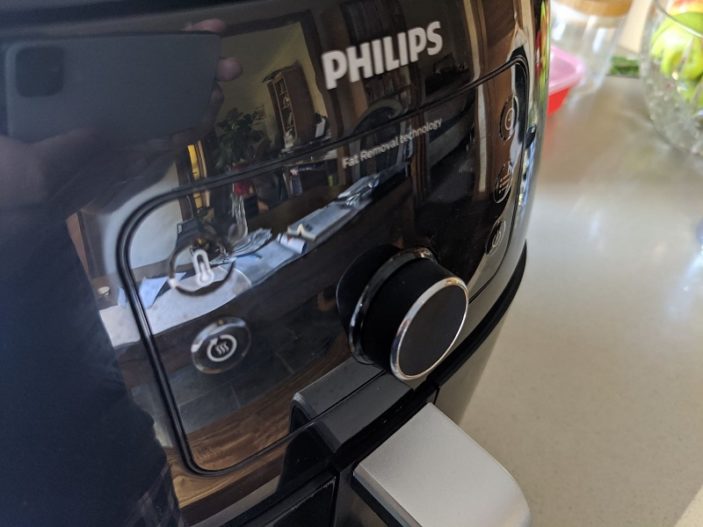 Controls on the panel are kept simple and couldn’t be more straight forward. There are five pre-set cooking programs like defrosting, chicken, steak and fish, and the large LCD display makes sure you know exactly what temperature is set and how long you’ve got to go. You use the dial to adjust the temperature in 25-degree increments, and no pre-heating is necessary since that aforementioned Twin Turbostar technology is backed by a powerful motor and 1725-watts. It’s a workhorse.

The airfryer comes with a detailed and thoughtful 30-recipe book, taken further by am inoffensively designed smartphone app which has more than 200 recipes. There’s a good range here, tracking everything from snacks and appetisers to pastries and desserts, slightly skewered towards western food but still managing to fit in a great deal of world cuisines, particularly Asian ones.

Although there aren’t many removable parts, they are all dishwasher safe and easy to hand-wash. The food basket itself is deep and made of sturdy metal with a mesh bottom, sitting on a much larger pan that’s got deep sides, a scalloped bottom and a thin star-shaped plate to focus hot air back onto the food.

The main thing you’ll be playing around with is the food basket, with a big handle jutting out from the front of the device. Pull it out and you’ll notice the definitive characteristic of this particular airfryer, and why it’s name as such. With a capacity of around 1,360g, you can fit a lot of food in here, making it ideal for prepping big batches at a time. Philips seem proud of the fact that you can actually cook a whole chicken in here, but they’d have to be on the smaller side. Smaller than what’s usually available at local supermarkets. 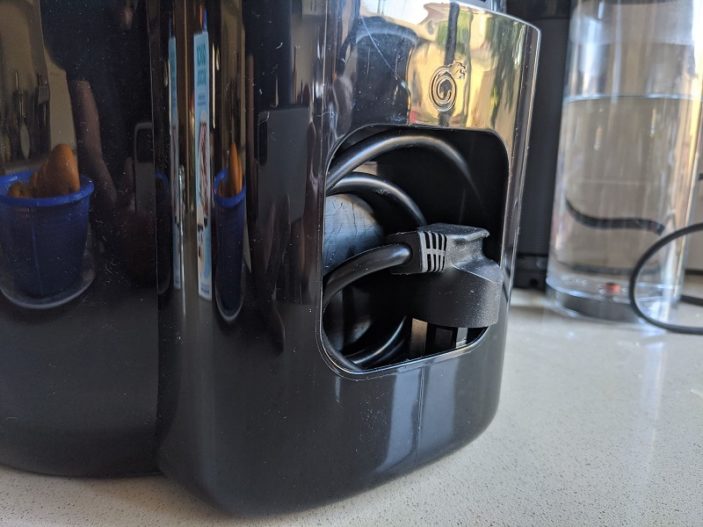 Cable management is handled simply by tucking the power source into a crevice on the back of the airfryer.

Even though most users seem to love this thing in particular for the way it reliably delivers crispy, creamy fries, I’ve grown quite fond of making pastries in the airfryer. Just spoon any kind of mixture onto some puff pastry and pop in some somosas to taste what I mean. Air-frying browns and crisps brilliantly. And that extends to frying up some bread, baking eggs while maintaining a nice consistency, and speed-cooking tender and juicy salmon belly.

For more of an idea of the different things you can cook in an Air Fryer check out this Pro Home Cooks on YouTube, who turns in everything from apple pie to milk bread dinner rolls.

I’ve also tested the claim that an airfryer can basically resurrect soggy McDonalds fries and give you hot, crispy, salty deliciousness once again. It checks out, and it’s a game-changer.

Do note that even though you don’t need oil to cook, it’s a good idea to include some so whatever you put in doesn’t come out too dry. You need at least some oil to help the airfryer pop out the best results. I made this mistake on the first few tries.

The addition of a “Keep Warm” function is handy for syncing your air-fried food with the rest of your meal prep, as it’s more than likely the machine will beat whatever you’ve got going stovetop. But do make sure something has been cooked to your satisfaction before leaving it in the basket, because one giant con is that it’s much too easy to overestimate the time necessary, overcooking whatever is inside.

As such, there’s an art to getting the exact time and temperature you’d need for each meal, and the recipes you find online aren’t always accurate as they are likely based on less powerful models. The recipes in the accompanying booklet are fairly accurate.

Anything that can go into an oven can safely go in the airfryer as well, so baking paper or ramekins are no issue. Unfortunately, Philips don’t actually provide any external accessories (like skewers), although they do sell them separately.

Another glaring issue is that there’s no stirring arm. Some other less expensive models include one, purposed towards cooking food evenly. The fact that there’s much more space may have made this less of an essential, but it would have been nice to have anyhow given the price tag.

The main thing holding this particular airfryer back is its price. You’re paying $500 to essentially save time between batches, given the size of the Philips Airfryer XXL allows you to cook a lot of something at the same time.

Other than that, it’s easy to use, efficient, and powerful. Having one just makes cooking up more substantial meals despite being time poor (which isn’t really an issue now, with more people staying at home) easier.

On the other hand, the shape may serve as an unintentionally convenient reminder of what you’re body would look like if you were deep-frying everything instead, taking up more counter space than a lot of smaller kitchens have to spare. There’s also the lack of included extras and a stirring arm, making the price tag seem a bit too high.

Philips do have smaller, less expensive models. But if you do have the money, you may as well go for the top of the line.

Highlights: Large and powerful; very straight forward and easy to use; easy to clean and maintain; get the deep-fry crisp without the oil (ie, magic I never thought would ever exist)
Lowlights: Can overcook unless exact; accessories sold separately.
Manufacturer: Philips
Price: AU$499
Available: Now