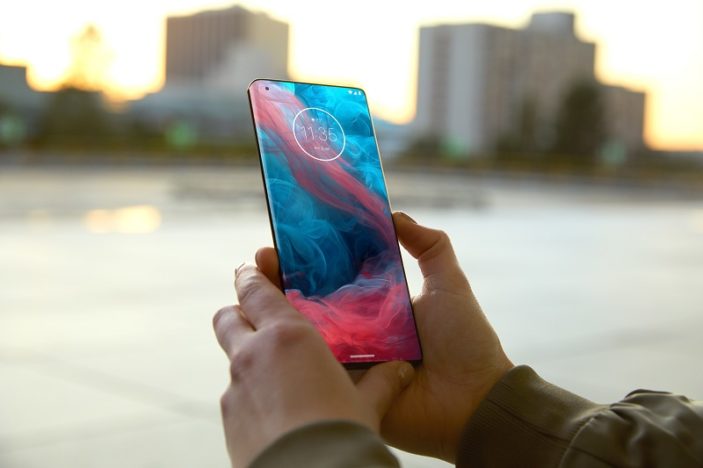 With strong entries from the likes of Oppo, Google and Samsung, the Android market is as competitive as ever in 2020. It’d be foolish to count Motorola out, especially since the stalwart company has put out what is perhaps their finest, value-conscious smartphone to date with the Motorola Edge. With the “+” version sitting at the top of their new flagship series, the standard Edge occupies the same space as the recently launched Google Pixel 5, Oppo’s Find X2 Neo and Samsung Galaxy S20 Fan Edition, given all four are priced at A$999.

And it’s putting up some great competition, throwing punches with a head-turning slim display, and a decent 5G-ready chipset. Is it enough to best its shinier rivals? There are cases for and against that, with the 5G-enabled Edge winning in some respects but falling woefully behind in others.

This value flagship may be a step down from the super-sized specs of the + (which is not yet available in Australia), but comes with a nice balance, feeling great in the hand and looking like a device beyond its mid-tier price point. It’s obvious design was a key for Moto, who hinge it almost entirely on an “Endless Edge” screen, banking that more users prefer an aggressively curved edge display than not. I don’t. In fact, I actively despise curved edges, especially when they are so ridiculously pronounced as this one – the sides wrap around the phone at a distinct 90-degree angle, doubling down on the phone’s name and pushing the standard buttons (volume rocker, power) further down the (right) side.

There are a few reasons why I hate curved displays, and they may seem negligible to some. First, the touch-screen can be much too sensitive when you’re holding the phone, making accidental presses far too common. Second, when you’re watching something in portrait mode, the edges obviously curved around with the screen and look distorted – even worse when you’re reading text that just falls off the screen. That being said, plenty of people love curved displays for a reason. They just help with the futuristic look of the phone, plus you can just change display settings (turn Endless Edge off) or download apps that set dead zones to eliminate sensitivity issues, and stop the phone from warping text.

Regardless, the curved edges help the phone’s definitively long and thin profile, forming an attractive look that’s finished in Solar Black (to my knowledge, the only colour option available in Australia thus far). As a result, there are next to no bezels running around the edge of the phone, achieving a 96% screen-to-body ratio which is the biggest justification for the design choices. I’d personally rather the compromise so I wouldn’t have to deal with the edges, but those who want an infinity display need look no further in 2020. That’s a comfortable position to be in, especially for a brand that’s had a great track record in the Australian market and should get over well based on recognition alone.

The small hole-punch selfie camera (more on the cameras below) is the only thing that interrupts the 6.7-inch OLED display (2340x1080p with 385ppi), but even then it isn’t looking for attention. When scrolling through or watching content, everything looks fluid and fantastic with its 90Hz refresh rate and 19:5:9 aspect ratio. It’s obviously the design team was keen to show off how well this refresh rate is implemented as well, with the phone shipping with an active wallpaper of deep blue waves shimmering across the display in a perfect, rapid rhythm.

Biometrics are handled by a fast and efficient in-display Goodix Ultrasonic fingerprint sensor that’s wide and accurate enough to never miss the mark. The same can’t be said for the so-so 2D face recognition though, which on testing can be quite slow and unreliable.

A modest IP52-rated durability will help shrug off light raindrops, but you wouldn’t want to be waving this phone around in heavier conditions, nor would you want to use it in the shower (yes, more and more people are using their phones in the showers because tech-addition is getting ridiculous).

I’m not loving the smudge-tastic high gloss finish on the plastic back, which I imagine was a cost-cutting decision and nothing more. It’s an atrocious fingerprint magnet. On the top left-corner you’ve got the camera system, without a unifying case around them. It’s an odd decision, but again perhaps another cost-cutting exercise. Because there’s no singular case sitting over them, the varying sizes is a big dent to the premium aesthetic, but at least the phone won’t be as lop-sided when it’s sitting on a surface.

The triple-camera system here and is commanded by a 64MP (f/1.8) lens (binning down to 16MP), followed by 16MP (f/2.2) ultra-wide and 8MP (f/2.4) telephoto lenses. Helping with depth is a ToF sensor for better bokeh, but as I’ll explain below, it’s not the hardest working ToF you’d see on higher-end phones like the Huawei P30 Pro.

Rounding out the design is a 3.5mm audio jack, stereo speakers (a down-firing speaker and an earpiece speaker), and a SIM card slot for anyone who wants to stretch the onboard storage

Let’s get one thing straight, this is not a gaming phone, and if you’re expecting to push it with titles like Fortnite and PUBG then you only have yourself to blame. The Edge may be generous when it comes to some design elements (largely the display), but it’s playing its part when it comes to its mid-range chipset.

Here you’ve got a Qualcomm Snapdragon 765G, which is by no means weakling when it comes to power – and power efficiency – but isn’t reaching into premium territory. It’s actually the same processor that Google chose for it’s new Pixel 5, albeit complementing it with more RAM. The Edge sits with 6GB RAM and 128GB onboard, expandable (up to 1TB) storage. That’s really not a bad set-up under the hood, and the Edge will handle most basic tasks with ease. But as I said, don’t go pushing this with intensive multi-tasking, app load and high-res gaming – it just won’t be able to handle all that pressure.

Stock Android 10 is still the best version of the software out there, and the reason why Pixel finally sucked me out of the Apple ecosystem back at the start of this year. With the bloatware worked up by brands trying too hard to stand out, the Edge is easy and simple to navigate, only taking its own turn when it comes to new “Moto Actions” that include opening the camera app with two twists of the wrist, and toggling the torch by shaking the phone forward, in an aggressively flicking motion. They aren’t meaningful differences, but I think the torch one works quite well – not that I’ve had to use a torch much in 2020.

Other than that, being able to customise novel elements like the notification lights that run around the edges of the phone – and perhaps, leave room for dust – is largely meaningless but at least adds a bit of personality in a competitive market.

The camera is a respectable attempt at offering something comparable to the best on the market (Pixel, Apple, Oppo and Huawei mainly), but it’s just not quite enough to give this phone the edge is so boldly claims by name.

You’ll get some excellent, colour-accurate and nicely detailed shots with the primary 64MP lens, as long as you’ve got your lighting conditions right. The resulting 16MP shots look crisp on screen, only slightly downgrading when they’re transferred over to a computer. The telephoto lens’ 2X optical zoom isn’t quite impressive when you stack it next to competitors, but it can still take a decent shot without holding onto much noise, with similar results on the ultra-wide angle. There’s a little distortion at the sides, especially when put up side by side with the same shots from the Pixel 5 – which also uses a wide-angle but implements it much better, with a bigger perspective.

Night Mode is being pushed as one of the best for its price range, but it’s not. Again, the Pixel 5 – same price – puts this to shame, with the Edge’s idea of low-light failing massively when it comes to retaining detail, and leaves a lot of lingering artefacts in shadowy areas.

The ToF sensor seems rather pointless on portrait shots, which are great with colour but severely lack in depth and haphazardly apply bokeh that’s soft and inconsistent. That being said, the macro video recording mode is impressive, and possibly the best thing about the camera app. It’s one of the few things Edge has that competing phones don’t, and will be a winner for content creators who enjoy adding a bit of drama and depth to their videos.

On the front of the phone sits the 25MP selfie sensor, which support quad-pixel binning, much like the main shooter, and works beautifully in the right lighting conditions, much like the main shooter. Switch to Portrait Mode and things start to change, again with the bokeh inconsistent and pointless, and low-light significantly lacking in detail and holding on to a lot of noise.

The camera system really lets the Edge down, although macro-video is the one mode keeping it from being a complete mid-range failure.

You’ve got a solid 4,500mAh battery sitting underneath the Edge, and combined with one of the best power-saving processors on the market, it gets over as one of the phone’s best features. Motorola promise that the battery will last across multiple days, which is true for those who aren’t using the phone intensively. For those who are bumping it up to moderate daily use, expect an easy 12-14 hours, which is still quite impressive and more than enough to get you through a full work day. On the top settings, and indulging in that gorgeous 90Hz refresh rate, you’re looking at around 6-8 hours, which is still a lot for people who want to truly test this battery’s prowess.

On the other end of the battery story is 18W fast-charging. Although there’s no wireless charging – expected at this price point – the fast-charge works well and can juice the phone from 0 to hero in 90 minutes.

A good battery and great display aren’t enough to save the Edge when the camera system is so disappointing. Build is solid, despite having a fingerprint-friendly plastic back, and it says a lot that the Edge even had me thinking I could get use to curved edges. But given the competition from bigger players like Google and Samsung, it seems the Moto Edge just doesn’t shape up in 2020.