Logitech’s design team knows that they created something special, and they sure are charging accordingly. At a whopping $399, the high-end G915 Lightspeed Keyboard demands a hefty investment, but returns with superior quality and offers a full sized, remarkably thin and low-profile wireless mechanical gaming keyboard that is built to last for a very long time.

A solid plastic chassis is finished with a polished, premium looking brushed aluminium and it looks fantastic set against the highly customisable RGB lighting of the mechanical keys. Pre-set, the colours are frenetic and can be a bit distracting, but Logitech’s G-Hub software allows complete control over this feature, as well as pre-set animation effects, the arrangements of which are numerous and comprehensive. Notably, most of the keys can be individually mapped with lighting, ever so valuable for gamers and coders who want to visually map their keys for extra efficiency.

With two incline settings, those who aren’t already used to using low profile keyboards won’t have a hard time adjusting their hard-wired hand movements. The slim height of just 22m feels great no matter which position you choose, reiterating the stylish and premium experience Logitech is going for.

At night, the keyboard looks fantastic thanks to two-shot moulded keycaps, layered with the standard black plastic on top of a clear plastic so the backlighting can really come through clearly. Small details like this help up the value of the G915, which is important for something trying to justify such an ambitious price tag.

Note that this review is based on the tactile GL switches, which are also available in clicky or liner varieties. Assumedly, they all perform more or less the same and comes down to personal preference and habit.

Regardless which you’re choosing, all three versions of the switches have the same actuation points of 1.5mm and travel distance of 2.7mm, ensuring a bit more rebound to your fingers when you’re touch-typing for what should theoretically be a faster and more efficient experience. That’s probably why you see the G915 in just about every gamer set-up on YouTube now, with the seemingly negligible distance of lower travel distance being a crucial difference between a good keyboard and great one. 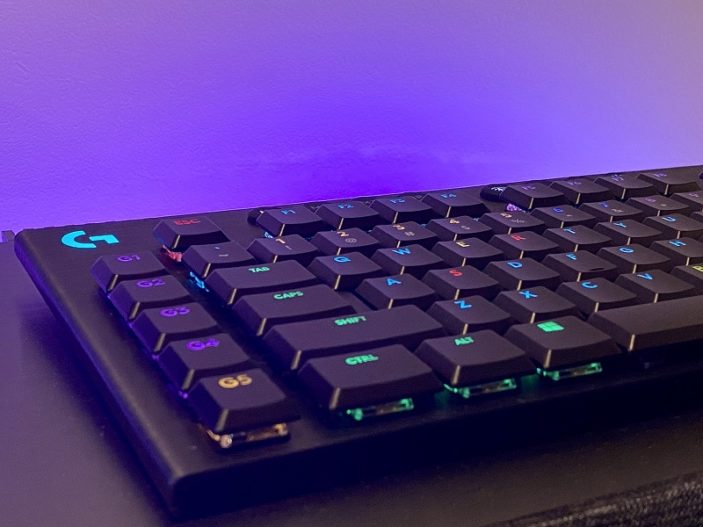 At 18.5-inches this is a bit wider than you’d want for a perfect gaming keyboard. The more recently released G915 TKL fixes that, providing the exact same keyboard but without the largely unnecessary keypad. The version I have is the standard, and feels wider than it should, especially with a column of macro keys (G1-G5) on the far left side of the keyboard with a small gap between them and rest of the keys. It takes a bit of getting used to shift where your fingers land, but it’s worth it since you have a dedicated and easy section that can be mapped (using G-Hub) to make work flow much quicker.

The G915 brings everything it can to the table, including the necessary media key section which is comprehensive, well-spaced and easy to use in a pinch. The top panel also includes buttons for USB dongle and Bluetooth connectivity, gaming mode, brightness, a volume dial, three macro-profile keys and a macro record button. Setting up different keyboard configurations and quickly switching between them is a god-send for anyone constantly switching between different games who want a seamless transition.

Disappointingly, the keyboard doesn’t come with a detachable wrist rest. It’s not much of an issue for me, but I imagine some users would need one given the keyboard is so low.

The G915 is all about angles, and making sure you can use it exactly how you want. As such, there are numerous ways of maintaining a connection between your device and the keyboard, the best of which is via Logitech’s Lightspeed dongle, 2.4GHz connection which, during my time spent road testing the keyboard, worked flawlessly. I could notice a very slight input lag when going with Bluetooth, but that could have been more to do with my device rather than the G915. The other ways to connect are via micro-usb, which of course introduces the need for a cable, and Wi-Fi which for me presented with no lag at all.

Via Bluetooth, the keyboard can connect to two devices at once (like a PC and smartphone), and switching between them is just a matter of pressing a button on the keyboard. Surprisingly, the transition is instant, even from a significant distance away from both devices.

At 100% brightness, you’re looking at 30 hours of solid, continuous play. That’s incredible, but doesn’t quite catch up with Logitech’s claims of 12 days of play, based on 8 hours per day. Still, that’s a sizable number and more juice than you could reasonably want from a gaming keyboard. If you turn all lighting off, the company claims 135 days, but this isn’t something I’ve been able to test.

The G915 is no less than perfect, and a remarkable achievement from Logitech. Although if you want the best gaming experience, I’d suggest looking for the TKL version without the keypad. The only issue here is the wild A$399 price tag, which is more than mostly anyone would want to pay for a gaming keyboard.

You get what you pay for though, and if you’re after a perfect gaming set-up then you’ll need to widen that budget a bit and take a dive. At least it’ll last for a very long time.

Review based on unit supplied by Logitech.