While I’ve been particularly impressed with their TV range this year, I wasn’t expecting the company to race towards the end of 2020 by bolstering their modest but mighty range of portable Bluetooth speakers.

Adding a new layer to their LG XBOOM Go PK series, a trio of XBoom Go PL speakers has just been released into the Australian market, capping with the PL7 – promising a 24-hour battery life on a single charge – and bottoming with the PL2. Sitting comfortable in the middle is the A$129 PL5, which is what I’m focusing on for this review.

There haven’t been many portable Bluetooth speakers being released this year, with most brands leaning towards wireless headphones – both over and in ear – and leading to one massive chokepoint in the market. That leaves the speaker scene nice and open for LG, who has the edge over a lot of competitors due to their close working relationship with stalwart Brits Meridian Audio, who have an exceptional track record when it comes to putting out high-fidelity speakers. 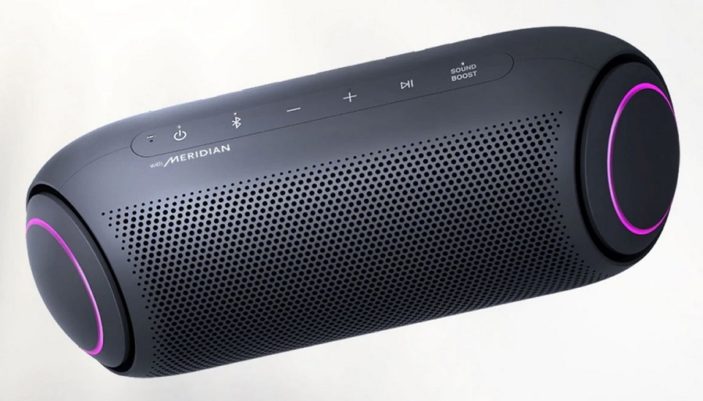 LG’s design team isn’t winning any award for innovation here, but they’ve arrived at the design which has proven the most ideal for portability. It’s a rounded speaker, nicely curving off on the sides to avoid any sharp or incongruent edges. The bottom of the speaker flattens out so it can sit flush on a surface. Although it only weighs in a feathery 62g and the body is largely rubberised, the build still feels quite solid. I just wouldn’t go throwing this one around, since the passive radiators on either side aren’t protected.

Flip the speaker around to the back and there’s an eye-catching XBOOM labelling debossed, sitting next to a rubber flap that hides the few connection ports – USB-C and 3.5mm AUX. Slide along the top and there’s the typical physical buttons controlling power, Bluetooth pairing, volume, play/pause, and one to flip the Sound Boost mode on and off.

Those aforementioned passive radiators sit at either side of the speaker, framed by a beautifully designed LED circle that accurately syncs up with the rhythm of whatever’s playing through the speaker. I’ve always found party-minded light-up speakers to look a bit tacky and exclusively for a younger crowd, but the minimal form of these lights, and the way they function, is really charming. In fact, I’d go so far as to say this is the only time I’ve seen LED lights implemented the right way, moving away from the obnoxious design briefs and landing on something both gentle and playful.

An IPX5 rating means you can splash this speaker with no problems, but it falls far behind a lot of other speakers at this price point, which achieve a much higher rating and can actually be submerged in water without issue.

Dual 1.75-inch drivers sit behind the front-facing speaker grille, which when considered with the dual passive radiators means the speaker has a total output of 20W. Modest, but reasonable for its size.

With Bluetooth 5.0 (AAC, SBC support; no aptX), performance is consistently satisfying and the speaker can get considerably loud, although you wouldn’t want to push this to max volume. The speaker performs best when volume is at 70% though, with a reasonably strong and detailed low-end that falls apart if pushed too high.

I suggest keeping the Sound Boost feature, turned on if battery life isn’t much of a concern, as it noticeably improves the mids and highs so vocals have plenty of presence and attack.

If you’ve got multiple LG wireless speakers, you can link them using the LG Xboom app with the Party Link option. That’s welcome for those already in the LG ecosystem, although the app disappointingly lacks a variety of other options that should be standard with Bluetooth audio devices by now. Most of all, that’s the ability for users to adjust EQ based on their individual listening tastes, rather reducing the feature to just toggling Sound Boost on and off. Luckily, Sound Boost is quite effective.

The soft and unobtrusive LED lighting effect can also be turned off with the app, but it’s so gentle and non-garish that I don’t find myself rushing to toggle this feature away, like I do with other similar lighting-enabled speakers.

Inside you’ve got a 3,900mAh battery which LG claims can last up to 18 hours on a single charge, and as a function of 50% volume. An option to have the speaker power down automatically can help lengthen the life, but it’s impressive regardless – although I don’t think LG’s claim is accurate. Rather I would get around 11-12 hours at 100% volume, which is still quite decent for a $130 speaker.

The real selling point of a Bluetooth speaker at this price point is that you can buy multiple ones without putting a major dent on your wallet. That way you can link them up and build the soundstage to be as big or as small as you want them too. But just on its own, the PL5’s soundstage is too narrow to not get a bit lost in the open-air. Instead, this is a handy travel speaker to put up in hotel rooms, or for use around the home. And it does the job this fine, especially when considering the biggest strengths of design and battery life.

That being said, the more powerful PL7 isn’t that much more expensive, so if better sound is what you’re after, I’d suggest taking a look at that one first.

Review based on unit supplied by LG.