You’d be forgiven for thinking you just bit off more than you could chew when Kenwood’s new Cooking Chef XL. Given its multitude of attachments, the device comes in a supersized box that looks like you’ve just purchased a medium-sized bar fridge. Open it up though, and things look much more manageable. Despite the “XL” tag, the new-look, new-function Kenwood Cooking Chef fits snugly on a table top and is just design-forward enough to look good whilst doing so.

As Kenwood’s most advanced stand mixer to date, it’s multifunction beast of a kitchen aid, and makes use of no less than 24 attachments to best others when it comes to everything from weighing and whisking, to melting, proving, steaming, slow-cooking, frying, and more. Consider it a cheat-code that negates just about every other kitchen appliance you own, and outperforms them on their individual functions with precision and reliability.

Though it weighs around 10kg, and is taller and wider than I would have liked, I can’t get over how attractive the Kenwood Cooking Chef XL is. Clearly the team have put just as much thought into the design as they have the function. The large, solid body plays into the brand’s reputation for producing devices with longevity in mind, plus most of the attachments are made from stainless steel, adding a bit of heft but ensuring a stamp of consistency that’d be unreasonable to expect from lesser kitchen appliances. Plus, the dishwasher-friendliness certainly helps as the attachments are all so versatile and easy to use that it’s likely you’d be needing to clean many of them on an almost daily basis.

The heavy, high-capacity bowl where all that culinary theatre will be taking place is smartly designed with a narrow bottom, so bakers can easily fit more dough and nail the texture of any small cake – and unsurprisingly, this behemoth stand mixer will turn you into a cake-making pro of the zero-to-hero variety in no time.

Given the price, you’d hope Kenwood have paid attention to the little details. They have. Even the slot where the cable feeds into is wide and generous enough so the cord is flexible and adaptable to your space. It can be as short or as long as you’d like, which certainly helps complement to ergonomic design.

Another strong feature is a light that can be toggled on and off so you can see exactly what you’re doing in the bowl. It’s these smaller features which help round out the Kenwood Cooking Chef XL and help build on a legacy which dates back decades, solidifying the brand’s reliability when it comes to painless kitchen appliances. This is the most refined stand mixer I have ever seen.

Integrated EasyWeigh scales accurately help measure just about anything and display it in big, bold lettering on the 4.3″ CookAssist screen. Not only is this touch screen easy to navigate, but its high legibility and the ability to visually customise it (you can even choose from various backdrops) make it all the more easier to keep track during every single step of a recipe.

Being able to knead dough or steam some an entire pot meal at the simple touch of a button saves an immeasurable amount of time in the kitchen and has quickly transitioned the Cooking Chef XL into an integral part of my daily routine.

Being someone who leaves the apartment at 8am and returns at 8pm, I’ve unwillingly joined the ranks of those time-poor amateur cooks who eventually give up and start worshipping ready-to-heat meals. Since adding the Cooking Chef XL to my paltry kitchen, I can actually prepare a generous, nutritious meal as part of my overloaded schedule, and I finally have time to get back into baking without having to wait until Sundays.

The other big-ticket feature of the Cooking Chef XL, especially when compared to other devices on the market, is a clearly well designed ability for induction cooking. Kenwood make the claim of the widest, most even, and most accurate temperature range of any mixer to stretch the amount of dishes you can prepare. The range, 20*C to 180*C, definitely plays into that claim, and I’ve found the bowl can easily handle a dense mix and produce incredible results.

A great example was the Vegan Thai green curry provided as part of Kenwood’s growing stock of easy-to-follow recipes (also accessible via the Kenwood World app). Not only was prep incredibly easy and intuitive thanks to the scale system, but being able to cook at exactly the right temperatures without having to wait for a heat source to do its job – invaluable. The results were something I wouldn’t be embarrassed to take to a dinner party.

All the expected attachments are here, allowing you to juice, slice, shred, chop, knead, etc. without much effort at all. What’s really notable is just how sturdy and well-designed all these attachments are. They each come with a lifetime guarantee, are completely dishwasher approved, and have clearly been refined with consideration to some of the common complaints of stand mixers. Being able to easily adjust them in seconds is one, whereas another would be being able to scrape every single bit of liquid from the sides of the bowl to help with precision.

Because that’s really what the Kenwood Cooking Chef XL is about. Precision. Everything here is so beautifully considered to reiterate the fact that when cooking, baking, or doing absolutely anything in the kitchen, details matter more than anything else. And sometimes the smallest tweaks can make the biggest differences to flavour.

Of course, this much is obvious. But it’s so easy to cut corners in recipes and think that tiny shortcuts aren’t going to have much of an impact. With the Cooking Chef XL, I don’t need to take any shortcuts, and this in turn helps with my confidence in the kitchen. 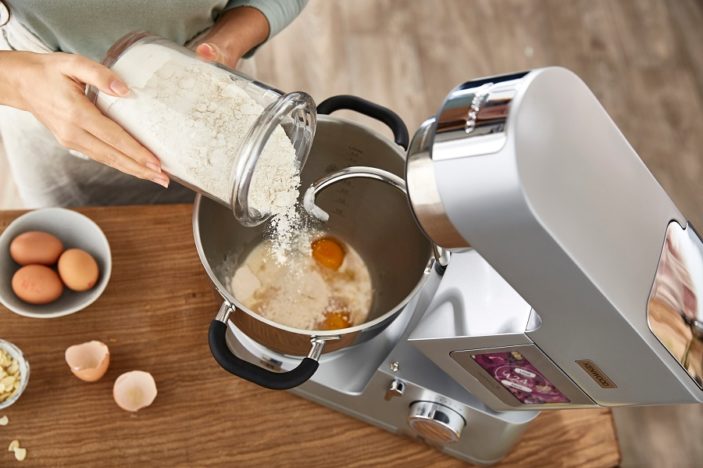 The performance is unquestionable. While I haven’t played with near as much of these high-end kitchen appliances as I would have liked, the Kenwood Cooking Chef XL is one of those devices where, even after a short while, you can’t imagine what you were doing before it came along.

That kind of excellence comes at a very high price. $2,000 high. These types of appliances always vary in price shortly after they are released so you could probably pick it up for a bit less in a few months – regardless, it’s a hefty investment.

But it’s worth it. As long as you’re kitchen isn’t already loaded with appliances that can do a good-enough job. I’d highly recommend this for anyone who has just moved out of home, or time-poor chefs who want something a bit more sophisticated and advanced to help them lift their culinary game. Plus, it’s a great showcase for just how perfect induction cooking can be when its been designed well.

Given the price, you may want to consider whether you need the extra bowl capacity that comes with the XL as opposed to the non-XL version. You’ll also want to consider it as a function of your individual schedule. For example, if you’re time-poor like me, and you like to do various things in the kitchen (or you’d like to sharpen your culinary skills), then the value of this machine is obviously going to be boosted considerably. However, if you’re already quite nifty and efficient in the kitchen, pace yourself well and have enough time on weeknights to prepare a meal, the value is going to go in the opposite direction.

Highlights: A vast range of attachments that are easy to clean and smartly designed; high-capacity bowl; slim despite its weight; reliable induction cooking with a good range of temperatures; touch screen and app work harmoniously; Kenwood has a great stock of recipes; smart replacement for a lot of other kitchen appliances.
Lowlights: Very expensive so you should genuinely need it before you make the investment.
Manufacturer:: Kenwood
Price:: $1,999
Available:: Now

Device supplied by Kenwood for review.