JBL PartyBox 310 Review: Pure, powerful, and absolutely worth it 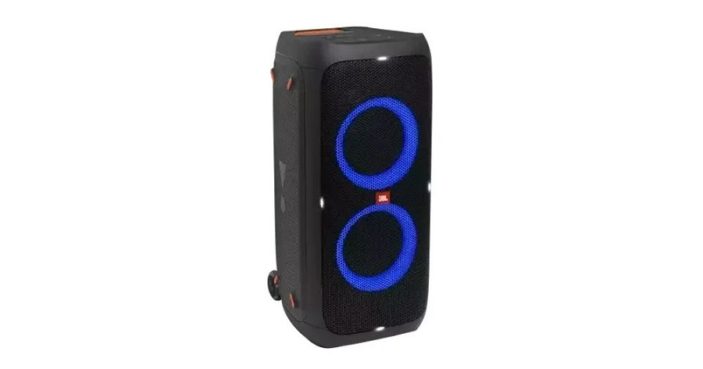 JBL have redefined big, booming Bluetooth speakers with the PartyBox 310. That much is clear as you can turn on this mammoth, booming device which is now one of the most powerful Bluetooth speakers on the market, and justifies the huge asking price with a similar sized performance.

If you’re familiar with the still-young PartyBox series than you already know what to expect. JBL aren’t switching up anything here, but they are making the ringed light show much more refined. The programmable rings around the drivers light up in a variety of hues and can be controlled via the app (or with an on-board button), taking the whole RGB lighting far beyond gimmick territory and making the dancing lights engaging and a completely logical inclusion.

Dual microphone and guitar inputs help reaffirm the PartyBox line’s position as a Bluetooth speaker series that’s just as viable for roving live performers (think buskers or just those who want some mobile karaoke) as it is for party-minded listeners who want something big, clear and impressive for their impromptu parties on the beach, in the house, or… anywhere really.

The sleek black body is fairly uniform, making the coloured rings pop even more, whether the speaker is placed horizontally or vertically.

Vertically is the desired orientation though, as it gives you easy access to the haul handle so you can wheel the speaker around just like you would a suitcase. That is necessary to help with portability, since the speaker is so tall and heavy (17.1kg heavy). For anyone who doesn’t want to have to deal with that, the lighter, smaller format JBL Party Box-On-The-Go is pure power for its size. JBL are leaving no gaps with this series, which has clearly proven to be one of their most successful product lines in recent memory.

An IPX4 rating isn’t strong waterproofing but it’ll get the job done. Just keep anything more than splashes off this thing, so standing it next to a pool is OK – throwing it in is obviously not.

One thing I like, which isn’t a new inclusion here compared with previous models, is the little groove on the speaker’s top side so you can easily place your smart device while streaming tunes off it.

Around the back is a control panel with just about every dial you would expect. Although with the multitude of buttons, you would have hoped JBL would have separated functionality a bit so you don’t have to press anything more than once. The play button for example, can be pressed twice to skip to the next track, or three times to skip to the previous track. It’s responsive enough, but there have been a few times where I’ve pressed twice and it registered as three times, for example.

Dedicated buttons are there for the customisable ‘sound effect’ addition, bass boost – which does exactly what it promises – and Bluetooth pairing, as well as a Karaoke setting and a one to toggle external input on/off. For anyone using a guitar or mic, there are volume knobs and gain adjustments so you can dial in the exact EQ you want.

Although quite directional, the JBL PartyBox 310 is a beast of a performer with an immersive enough sound to completely blanket a decently sized space with banging beats. Hip hop or electronica are going to sound best on the default EQ settings but JBL’s app and EQ adjustment is flexible enough that you can land on the exact balance you need.

One thing I’ve noticed with JBL in recent years is just how well they’ve gotten at restraining the low-end and holding space for brighter mids and highs. That’s replicated here, and as such you get a good balance of all three features even at the higher volumes. But do be warned, max volume can get quite muddy when the bass tends to slip and isn’t as nuanced.

An impressive 18 hours of battery life with a 3 hour charge time? JBL clearly paid attention to demand and has such offered a powerful Bluetooth speaker that can easily last an entire party. Unless, of course, you’re in Berlin or Amsterdam and you need something that can endure a multi-day marathon.

$699 is a lot of invest in a speaker. More so if you’re planning on getting others and linking them up like JBL make it so easy to do.

Still, there’s a tremendous amount of value here. If you’re looking for loud and you want that nightclub-appropriate sound without investing in an even more expensive sound system, this should do you just fine.

Plus, JBL atone for the rather sluggish size but making the PartyBox 310 as portable as they can. The haul handle is an excellent way to lug this from party to party. Although of course you can only lug one at a time.

With a strong performance, solid build, and nuanced RGB lighting show – consider the PartyBox 310 one of the best out there.

Highlights: Solid performance, even at higher volumes; easy to move around like a big suitcase, great connectivity, nuanced light show; strong battery life.
Lowlights: Bass can topple a bit at max volume; very big investment if you want to pair this up with other PartyBox speakers.
Manufacturer: JBL
Price: $699
Available: Now

Unit supplied by JBL for review.