Portable speakers may not be pumped out as regularly as truly wireless headphones/earbuds right now, but Harman Kardon have certainly made a strong case for the mini audio devices in 2020. With the Neo, the stalwart brand has presented something incredibly lightweight but packed it with enough punch to easily place it as your next go-to travel speaker.

Given the brand’s Citation range is sitting comfortably as one of the more popular home speakers this year, the Neo is in a good place to round out the range for 2020. 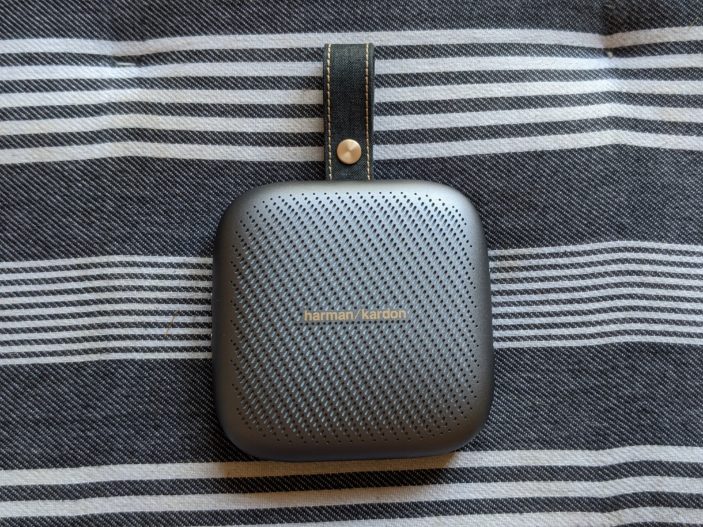 The Neo is simple and rather elegant, looking a bit nostalgic with its similarity to a discman (remember those?). The angular 251g body is made of a durable metal – finished with either blue, silver or bronze – and sports a trust IPX7 waterproof rating, reiterating the outdoor-friendliness so central to the design.

Obviously anyone constantly on the go, like hikers or cyclists, have been kept in mind when putting the speaker together. It features a strong loop at the top so users can easily attach the speaker to bag straps or belt loops quickly and without hassle. The loop allows for a wider and easier fit than the Bose SoundLink Micro, another strong portable, which instead uses a tear-resistant rubber strap with a tight clamp.

The speaker’s plastic bottom has a synthetic coating so both sides are quite durable.

On-board you’ve got the USB-C charging port and a 3.5mm jack for line-in, but Bluetooth should be the way most users connect. Unfortunately the outdated Bluetooth 4.2 signal isn’t the greatest, and doesn’t allow for as much distance as one would expect. You’d typically expect around 50m from Bluetooth 4.2, whereas the more up-to-date 5.0 would work with a range that’s easily four times that. As such, don’t venture too far from the Neo, especially when making calls.

Although given it’s design and purpose, it’s unlikely you’ll be needing much more than 50m of range from the Neo, especially when it’s tucked in close to your backpack or belt.

The physical buttons that sit on one side of the speaker consist of the essentials only – don’t expect any smart assistance from the Neo. You’ve got play/pause, Bluetooth pairing, and volume buttons, most with a noticeable click when you press them.

The Neo punches well above its weight with sound quality, reaching a nice and powerful volume which, while slightly muddy in the mids and highs, still sounds great with plenty of balance. At a more reasonable level, say 70-80 percent volume, you’d still get enough sound to easily fill a room, with a nice and wide soundstage driven mainly by the mids. The low-end is much stronger on the aforementioned Bose SoundLink Micro, but the Neo still does a great job at decoding nuanced and booming basslines from its source.

Vocal-driven music like that of Sam Cooke or Marvin Gaye tend to sound the best, while dense instrumentals suffer from weaker separation so I wouldn’t recommend this for styles like jazz.

The speakerphone function works well thanks the echo-cancelling mics which block out a decent amount of external noise. Again, I wouldn’t get too far from this thing when using it for conference calls, but as long as your close, anyone on the other end should be able to hear you clearly.

A promise 10 hours of battery life, but that measurement seems to be a function of mid-level volume at around 50-60 percent. Instead, I found that it’s reasonable to expect around 8 hours at full volume from the Neo, which is still decent enough to get you through a daily cycle. If taking this on a multi-day hike, though, you’d want a power bank to keep this topped up.

For recharging via the USB-C port, expect around three hours before this hits 100% from empty, which isn’t quite the fast-charging standard of bigger devices, but should be considered fast enough.

While the Bluetooth is outdated and weaker than you’d expect in 2020, and the battery isn’t quite the strongest around, the Neo still wins massive points thanks to its powerful volume and sleek, mature design. It looks much better hanging off a backpack than nearly any other portable speaker to date, which is a testament to simple aesthetics that value a slim look over something blocky (like most other portable speakers out there).

At A$169.95, the price tag and performance is well-balanced and offers enough value for those constantly on the move. You may be able to find similarly priced portable speakers that sound just as good, if not better, but you’re unlikely to find a look that matches up to the Neo.

Review based on a unit supplied by Harman Kardon.