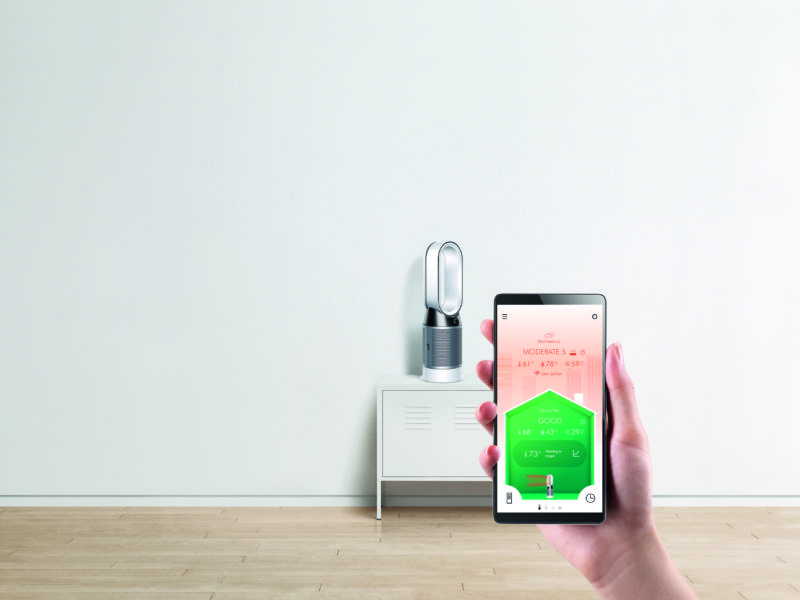 A smart home in 2019 wouldn’t seem so clever if it didn’t take advantage of Dyson’s incredible run with cooling, air purifying devices over the past few years.

The powerful Pure Cool should have been evidence enough of the company’s vital place in the modern home, doing away with intensive wall units and making a stronger case for the efficiency of having simple portable fans for temperature control.

Similar can be said for the Dyson Hot, which put a bigger focus on quality, self-modulating heating to take the pain away from having to continually adjust settings as a function of the changing environment.

And now, for the sake of balance – and simple mathematics – we have the Dyson Hot + Cool which represents the best possible marriage of the two, with finessed air purifying tech sitting in between as a reliable watchdog for the environment’s increasingly erratic air quality.

It’s a three-in-one device essentially, and though it’s a big investment for a portable fan, the performance absolutely justifies the RRP of AU$799. 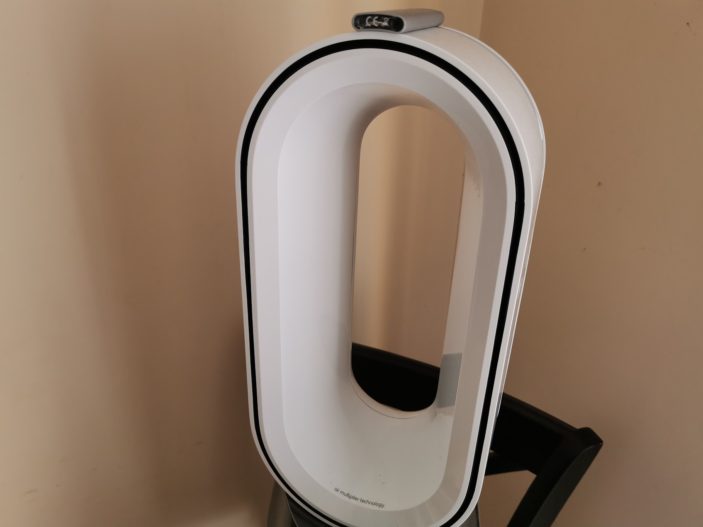 Those who own or have owned Dyson products should already know what kind of clean form to expect. The tower is a simple and unfussed body of shining white and silver, featuring the futuristic bladeless design the company has become known for.

Though slightly heavy thanks to the filter base, the Hot+Cool even manages to be a somewhat portable fan with its 764mm height and 248x248mm base. In addition to the great oscillation (which we’ll get to later) you can also position the fan to face up or down, so its height isn’t as much of an issue whether you’re placing it on the floor or on a desk.

Beneath the fan is the cylindrical perforated filter. It’s chunkier and the reason for its increased weight, but not so much that it disturbs the device’s sleek profile. The polished silver works rather well with the white tower, meeting it halfway where Dyson have included a small circular LCD panel on the front.

Without any provocation, the display shows a simple graph at all times that indicates how clean the air is. Use the provided remote (magnetically attachable to the top of the fan, as always) and you’ll be able to toggle various information, including readings for finer particles (PM2.5), more dangerous particles (PM10), harsh chemicals (VOCs) – from cleaning products for example – and nitrogen dioxide. All this information can be useful to inform behavioural changes and better understand the air both in your house and outside. More so because the app also logs historical changes in the air, so you can fully understand what effects quality over time. 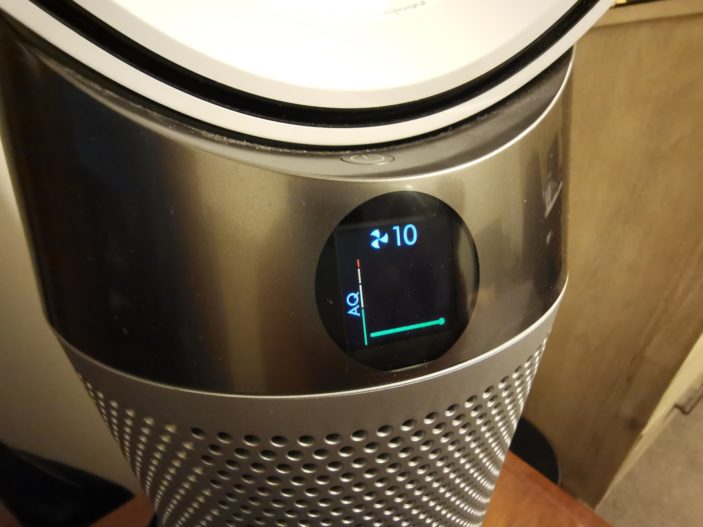 In the average home you’ll only really need the standard graph (and maybe the PM2.5 and VOCs), but having comprehensive readings of the others means that this fan can be incredibly useful in all types of situations.

The use of both carbon (for gasses) and HEPA (for particles) filters means that this machine is sucking up a lot that you wouldn’t normally notice if you didn’t already have asthma or a similar breathing problem. Luckily you don’t have to worry about checking it constantly as the companion smartphone app will tell you when it’s time to change the filters.

The ability to monitor changes in the atmosphere based on actions you may not think would do much harm (like using a certain bug spray) can provide plenty of insight and spur behavioural changes that may improve problems you didn’t even know existed (yet).

On the app, this display is given even more depth with measurements of air quality both inside and outside the house.

Whether it’s via the LCD panel or the companion app, this Dyson allows you to accurately measure temperature and humidity and adjust accordingly.

This is Dyson’s most ambitious fan yet, so you can be sure that heating and cooling work fast and efficiently. On my test, the rapid change in temperature was incredibly quick with a steady and consistent airflow that, on fan speeds under 6, buzzed quietly enough for a pleasant sleep.

Use the app to crank the fan speed above 6 and the sound is a bit more noticeable, although it’s not markedly loud until you reach 10.

While fan speed is able to be changed easily via the app, it’s as a function of either cooling mode or heating mode. Cooling seems to have more nuance with these changes, but heating still works exceptionally well.

Sometimes heating works too well though, but luckily the fan is smart enough to turn that mode off once it hits the right temperature.

If you opt to control either mode as a function of the fan speed then you’re best off paying attention to the LCD screen/app and adjusting to personal taste. This means that most times its just easier to leave the fan on “auto mode”, which monitors air quality and temperature, changes fan speed accordingly, and turns the fan off when the air is clean and the room is at the desired set temperature. 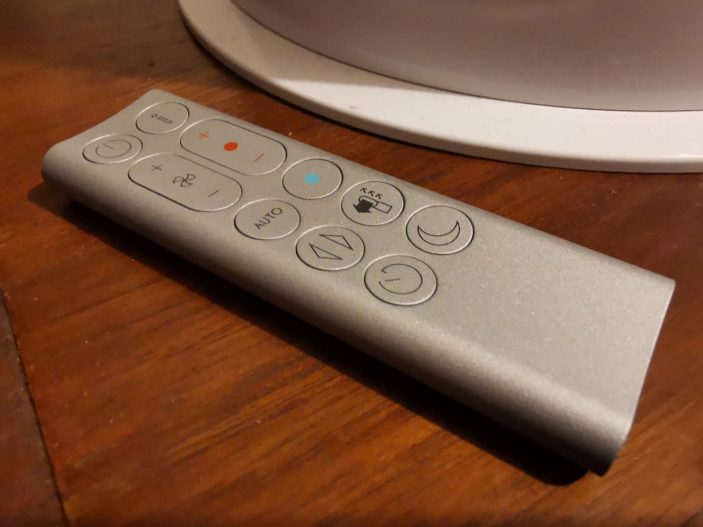 Successfully consolidating three products into one and making sure each function is up to scratch is no easy feat, nor would it be simple to capture this functionality on the inevitable companion app. Luckily Dyson have got the UI/UX exactly right for their smartphone control, presenting a very clean and easy-to-use interface that filters only the necessary information into a simple graphic so users can make quick use of all the device’s information and features.

The physical remote – again, magnetically attached to the top of the tower but easy to misplace if you aren’t in the habit of doing this – is a swift lesson in frugality. It’s uncomplicated and clean, with 10 buttons in total including temperature controls like a blue button to quickly switch into “Cool” mode or a button to toggle the nuanced Heating mode. Auto mode is where most users will want to be though, setting the smart fan on auto-pilot while it monitors the air and adjusts fan speed to assist the cleaning process, after which it will automatically turn the fan off, set the right temperature and continue on silently.

There’s even a Diffused mode to direct airflow to the back of the fan so the fan purely turns into a purifier only, avoiding blasting you in the face with any temperature changes.

The app is much better at setting the right oscillation for the fan, giving you a fun graphic that shows you precisely what areas you will be covering from the range of options of 45, 90, 180 and 350 degrees.

Most used for me would be the easy Night mode (represented on the remote as a moon) which just dims the device’s display and sets the fan speed at a max of 4. Pair this up with the easy-set timer if you don’t want the device running all night.

For the sake of modernity, the Hot+Cool is compatible with Amazon Alexa (and only Amazon Alexa) so you can set up voice controls to toggle fan speed and temperature.

Presenting a three-in-one device that can be used year-round in all kinds of conditions is a smart move from Dyson, but it wouldn’t have meant much if all the functions weren’t balanced so well. Fortunately, Dyson have presented a fan that’s brilliantly nuanced and pays attention to detail, with the best of all three functions so the air stays pure and you stay sufficiently cool or hot depending on the environment.

I live with someone who regularly suffers from allergies and have noticed a drop in complaints since using the Dyson around the house. And that wouldn’t even be using this to it’s full potential, given the strong carbon and HEPA filters help tackle all kinds of pollutants.

Highlights: Cools, heats and purifies while doing all three things very well; relatively quiet until you get to the higher fan speeds; slick design that’s compact enough to place it at various heights; comprehensive display and smartphone app that also includes historical changes in air quality; smart auto mode that takes care of everything easily; tackles all kinds of pollutants and makes a marked difference for anyone suffering from allergies.
Lowlights: no support for any voice assistant other than Alexa; although quiet at most times, the highest fan speed is a significant jump in volume.
Manufacturer: Dyson
Price: AU$799
Available: Now

Reviewed based on unit supplied by Dyson. Opinion remain that of the author’s.