2019 has been a big year for noise cancelling headphones, and the race to produce the very best has been increasingly difficult to call. Bose were once the clear front-runners with the widely acclaimed QuietComfort line, but since then worthy competitors from Sony, Sennheiser and Bang & Olufsen stepped up in a big way. With the Noise Cancelling Headphones 700 (NC700s), Bose take great steps at working back towards the throne, but is it enough?

There are a number of risky changes Bose made to distinguish the 700s from their QuietComfort 35 II models, all which have led to a bump in price point. Although it’s not much of a bump, but it’s still more expensive than Sony’s WH-1000XM3, and I’m not quite sure Bose have done enough to top their closest competitor. 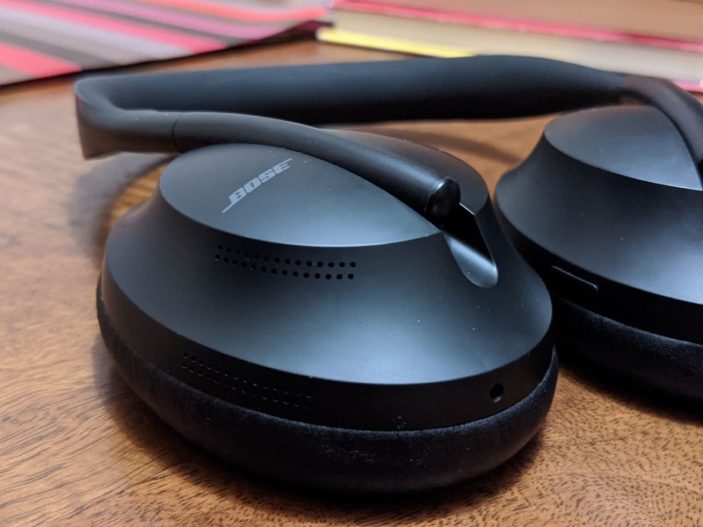 Let’s be clear about this. Although the NC700s fall behind competition in other elements, the build quality is outstanding. Rather than the plastic headband of the QC35 II’s, these make use of a single slim piece of stainless steel seamlessly running between the shimmery chamfered earcups, fit into small grooves in which the cups can smoothly slide up or down. This does away with any visible hinges or jarring lines for a remarkable, modern look in either a black or silver finish.

The silicone-padded earcups, also slimmed, share between them only three textured function buttons, as well as a 2.5mm microphone jack – handled by a 2.5mm to 3.5mm cable – and a USB-C charging dock. Why Bose decided to go with a 2.5mm is a bit confusing, so you won’t really be able to use this cable on a standard laptop or with in-flight entertainment systems, for example.

A slimmer shape also means the headphones can slide off if you position them towards the front of your skull (and good luck keeping them on while you’re laying down). This can be annoying for those not carefully placing these towards the back of the head, although I’ve only ever had that issue once or twice, and while walking quite fast.

The tightness and angle of the headphones also makes them clamp down pretty hard when you put them on. It’s uncomfortable at first, but not something you won’t get used to after a few days.

One more noticeable departure from the Q35 II’s is that the 700s aren’t able to fold in half, meaning that you’ll simply be placing these in a slightly larger carry case. Not a dealbreaker by any means, but it does mean the impressive flexibility of these headphones, as a function of smaller carry solutions, is missed.

On the device you’ve got a noise-cancelling button to easily toggle an ambient mode (“conversation mode”) on/off, one for power and pairing, and one to access a device’s voice assistant. Other controls can be accessed via the impressive and reliable touch functions, with a double tap on the right earcup’s Bose logo toggling pause/play. A simple forward/backwards swipe scrolls through content, and up/down adjusts volume immediately. Answering calls just requires a quick double-tap on the designated area, while tapping and holding rejects any incoming call. A neat touch is also being able to hold the touch area for an accurate reading of remaining battery life in hours (as opposed to percentage).

Bose are clearly focused on streamlining the personal audio experience, and making sure it all works as seamlessly as possible (yes, even in cold weather).

As for that carry case – it’s designed with a perfect sense of convenience. There’s a magnetic compartment in the case so you can store the cables underneath the headphones, and a precise groove so you can simply place the headphones in and zip up.

Listening to music is surprisingly not where the 700s excel, instead edging the most forward when it comes to voice communication and noise-cancelling. Bose’s signature (and very hard-working) NC chip is nuanced enough to handle 11 increments of noise-cancelling, allowing complete control over how much of the outside environment you let slide into your own private audio chamber. And they all have meaningful differences between them, with anything from 6 onwards significantly flattening outside noise. I found somewhere around 4-5 is sufficient enough to walk around and still clearly pick up announcements at the train station, for example, without disturbing the music too much.

A beamform array of eight microphones has been engineered to precisely pick up your voice while actively reducing the noise around you. As such, the 700s are easily best-in-class when it comes to using the headset to make and receive calls. This also means that all the always-on assistants – Siri, Google Assistant, Alex – can hear you much better and respond accordingly, as long as your assistant of choice is pre-set to the functional button via the smartphone app. It’s the smoothest and most reliable voice experience I’ve had with a pair of headphones.

The 700s get another enthusiastic thumbs up when it comes to connectivity. The headphones use sturdy Bluetooth 5 with SBC and AAC codecs – not the best for high-quality streaming, but great for stability. I tested that out with both an iPhone 8 and Huawei P30 Pro and had almost zero issues, even after using these things for a couple of months. With other headphones – for example, the Sony’s – I started to have slight issues a few months in.

Latency is also solid here, and content is fine across all usual mediums. That’s good, that’s standard, and that’s expected of a pair of high-end headphones in 2019. The real star here is the ability for the 700s to connect to two devices at once, and seamlessly manage the connection. Even pairing more than two devices and than swapping between them using the app was seamless, and led to no issues.

Although the 700s represent meaningful change for Bose and how they will approach the audio headphone market in the coming years, they aren’t winning the race when it comes to audio quality. Both the Sennheiser Momentum 3s and the Sony WH-100XM3s (which were released in 2018) have an overall better and more versatile sound profile, able to handle complexities with near-perfect isolation and depth.

On the other hand, the 700s are just really good. They won’t blow you away, but they won’t make you feel like you just wasted hundreds of dollars either. Ultimately, Bose’s claim that the sound is similar to the QC35 IIs is on the money. For a new model that’s supposed to improve upon its predecessors, that’s not a good thing.

A song like Miguel’s “Sky Walker” is rightfully opened up and attenuated, with fair bass and clear isolation. A more reliable test-song, Funkadelic’s “Maggot Brain”, also sounds clear and fully rounded, if not a little bit distant. Although a song like Mystikal’s “Neck Ov Da Woods”, which has a thick body and puts the focus on dense 808 patterns, begins to sound muddy when compared to the same song on the Sony WH-1000XM3s. A few other songs also indicate that the 700s just aren’t as punchy and forward when it comes to bass, and they are much too heavy on treble. Although they are good at almost everything else. Vocals in particular sound incredible on this (although, like with Maggot Brain, a bit distant).

The 700s are fairly quick to charge and fairly slow to burn-out, with a battery life of almost 20 hours at max volume. That’s good enough to get a full days use out of these, but the Sony’s last for 30 hours. Given that the 700s are more expensive, I expected best-in-class.

The companion smartphone app is also problematic at times. While Bose have definitely improved it since launch, I would first have issues with getting the actual app to recognise the headphones in the first place. Thankfully, that doesn’t happen anymore.

A big edge for the 700s hasn’t really been realised yet. That’s the compatibility with Bose’s audio-based augmented reality platform, which is yet to make an impact, but is capable of some pretty cool things. If Bose do end up meeting Bose AR’s potential, then this could make the headphones very valuable indeed. You can read more about Bose AR HERE.

I’m conflicted about the Bose 700s. On the one hand they are outstanding headphones and leap forward when it comes noise-cancelling, connection and voice calls. But they don’t sound as good as some (less expensive) competitors, the tightness can be an issue sometimes, and one of their most interesting features – Bose AR – hasn’t really taken off. They are $549 AUD (based on JB Hi-Fi pricing), and that’s a lot to fork out for headphones that are excellent when they should be exceptional.