I went to an ASUS ANZ product briefing in Sydney last night. It was about three different shows crammed into one — industry mixer, product show-and-tell, influencer meet and cocktail party. There were popular YouTubers I had quite literally never heard of before. Except for Ozzy Man, I’ve heard of him. It was fun hearing him perform his yobbo cock-and-balls act in front of a row of bewildered Singaporean executives. Then an art rave broke out. Thank you to ASUS ANZ for having me.
ASUS are obviously known primarily for their laptops, and they had plenty to talk about. The big draws though are the @ASUSAU ZenBook Pro Duo, which I’ve gotten to spend a little time with in the last week. It’s a wildly powerful laptop — 10th Gen @Intelanz i9, 32GB RAM, an @NvidiaANZ RTX 2060. Absolute madness in a laptop, yours for $4500 AUD.
Beyond raw spec, the thing that’s of biggest interest are its two touch screens. You have your standard 15″ laptop screen up top and then, above the keyboard, is a second touchscreen that functions as an extended desktop.
It’s wild. You can use it to draw or write on, pull apps, windows and widgets off the main display or use @ASUSAU‘s built in apps. Takes photo and video editing in stride, and the second screen is terribly useful for both.
I obviously used it for video games. I got Borderlands 3 running at 120fps without a problem. My bloody desktop at home can’t even do that. RIP me I guess.

I was only able to use the ZenBook Pro Duo for about six days before Asus needed to get it back for this very event. I’m told I’ll be able to check it out for a bit longer in the next week or so, and I’ll bring you amore comprehensive review then. For now — huge power with an equally huge price tag is the takeaway. 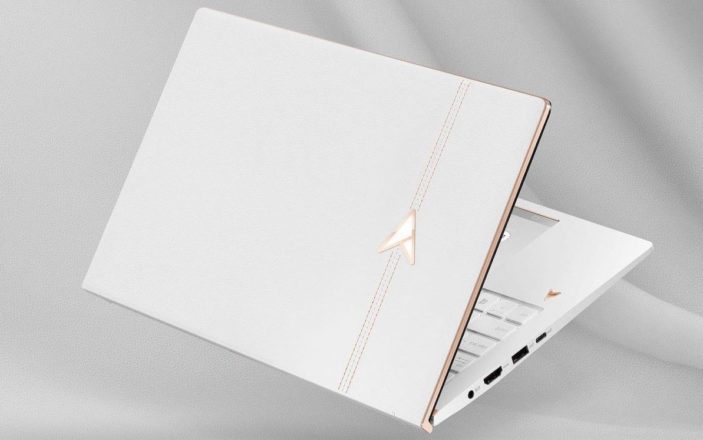 There’s also the ZenBook Edition 30 which is a laptop built to celebrate @ASUSAU 30th anniversary. It’s covered in diamond cut white leather and 18 karat rose gold. The icon they’ve come up for it looks like it belongs to Starfleet. Solid spec, but clearly all about the look. I’m not sure who’s going to go for this one beyond people are all about the flex? Don’t get me wrong, it looks cool but keeping that white rubber clean is going to be a full time job.

There were a few other little nuggets of information — Asus has updated their ScreenPad on mid and high tier models so that they function more along the lines of a smartphone. There are gestures, apps, and customisation options galore and in the brief time I got to play with them, they felt really good. The laptop industry loves a gimmick, but ScreenPad 2.0 feels like something the rest of the industry will look to co-opt in the future. The way it deploys its second screen without sacrificing the mousepad is a piece of great design.
I’ll be doing my best to roadtest other Asus machines in the coming weeks so please keep your eye on the AU for that coverage. Many thanks once again to the ASUS ANZ team for having me along to check out their showcase.
The author was flown to Sydney and provided one night’s accommodation courtesy ASUS ANZ.